BOX OFFICE: “Clock in its Walls” is money in the bank, “Fahrenheit,” “Life Itself,” Assassination Nation” BOMB 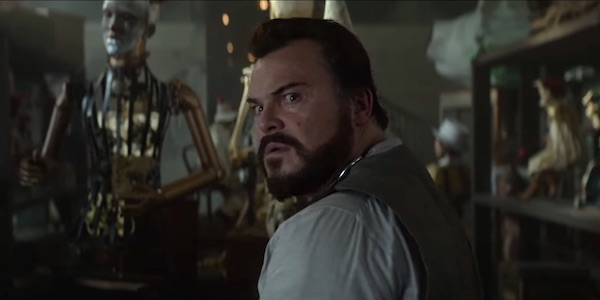 Whatever the appeal of the book it is based on, the added value of having horror mogul Eli Roth direct and Oscar winner Cate Blanchett in the cast, Black’s got to be the BIG reason “The House with the Clock in its Walls” is opening in the high end of expectations for its prospects.

A kid friendly picture, not a proven brand, despite the fact that it’s based on a best seller, “Clock” is ticking over to the tune of $24-25 million on its opening weekend.

That’s dues to Universal’s marketing of it and Jack “Goosebumps” Black starring in it. Go ahead, JB, hire a drummer and keyboardist for Tenacious D. You can swing it.

The weekend’s other wide releases aren’t doing well at all. And all of their failures, reviews be damned (“Clock” is tepid entertainment at best), can be blamed on the thing they got wrong that Universal gets right — marketing.

The Three Blind Mice marketing of Amazon (and Bleecker Street and Roadside Attractions) were going to have a hard time selling “Life Itself,” “despite an all-star cast and that TV tie-in (from the creator of “This is Us.”). The sort of people who consume network TV pablum like the soapy “This is Us” and find it Great Entertainment aren’t moviegovers. But as this marketing concern couldn’t sell merlot to winos, the film isn’t reaching anybody. Preview screenings by the score built no word of mouth, advertising failures, the works. Incompetent marketing and bad reviews mean the movie isn’t opening, it’s making a break for it IN SECRET. A 2 million weekend? If Jeff Bezos doesn’t clean house after that, I’d be shocked.

Michael Moore doesn’t have Harvey Weinstein’s company, or anybody else of note, behind his latest, “Fahrenheit 11/9.” Something called Briarcliff Releasing is distributing it. Plenty of critics got to see it, he’s done all the “preaching to the choir” chat shows to promote it. But have you seen any advertising?

It’s not bad, scores some big points and revisits Moore’s Greatest Hits (“Roger & Me,” “Sicko,” “Bowling for Columbine,” “Fahrenheit 9/11”). A proven distributor with marketing savvy could have boosted this one. But the country has big time Trump fatigue and Moore’s a bit of a broken record. $3 million, instead of the projects $7-10. I’ll bet Fox News trumpets this “failing filmmaker” as will the Tweeter in Chief.

In the studio universe, Neon is the poor man’s A24 — edgy, smart films, as a rule. But unlike A24 and like The Three Blind Mice, they have no clue about selling their product. None. I spend weeks at a time trying to get previews of their films (a week on “Assassination Nation”) and nothing but disinterested silence from their “people.”

“Assassination” is a dead-weekend wide opening, so they never had huge hopes for it. But “cult hit” and “could catch on” are written all over it. And it won’t manage even $1 million (maybe a little more). All that effort  and expense to make a movie, and lazy, inept boobs in charge of selling it? Neon needs to clean house and hire somebody from Searchlight or A24 to MARKET their movies.

“A Simple Favor” WAS marketed and IS getting great word of mouth, and will finish a distant number 2 this weekend, $11 million or so — an impressively small 34% drop from its opening weekend. “Predator” and “The Nuns” are fading at much faster rates.