Netflixable? The logistics of fighting Nazi Occupiers are worked out by “The Resistance Banker” 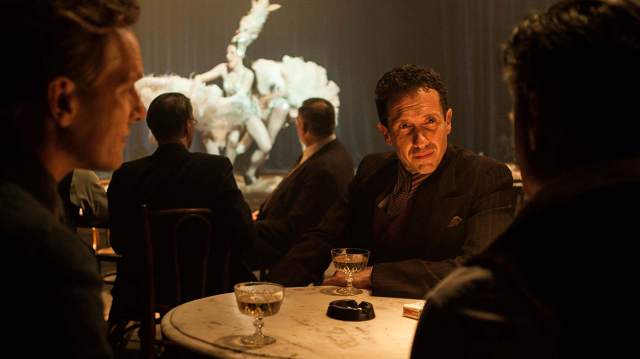 The Dutch Nazi Meinoud Rost van Tonningen smirks as he schools his German overseers about how things work in the Netherlands, even under German occupation.

“In this country, only the sun rises for free.”

If there is a Dutch Resistance, somebody is paying for it. Escaped political prisoners, Jews and others in hiding? Who buys their food and fuel for their stoves? Who financed the railway strike that crippled the movement of German troops and supplies?

The Dutch Collaborator in Chief doesn’t have to say what Deep Throat would famously say during Watergate — “Follow the money.”

“The Resistance Banker” is a Dutch film (in Dutch and German with English subtitles) about the logistics of resisting evil, the simple dollars and cents, or guilders and cents, of running an underground economy — paying men to fight, women to print and smuggle resistance newspapers — the cash, borrowed on credit, conjured up by those left behind to live under the Nazi terror, but guaranteed by the Netherlands Government in Exile in London against the day when the Germans would be wiped out or chased out.

Oh yes, “heroic bankers” is a new twist on the age-old Life Under Occupation thriller. But the tropes of what one hesitates to call a “genre “when this story is actual, historical fact are all here. Yes, this really happened and these are the people who made it happen.

As usual, we see jack-booted Nazis, furiously searching for those sabotaging, assassinating or simply talking and writing about the day they’ll be free. They face the embattled underground of brave but fearful, paranoid but purposeful members of a society, most of whom would have hidden Anne Frank, but any number of whom would have ratted her out for cash and official favor. There are traitors, betrayals, narrow escapes, murders and torture sessions, fake IDs and secret meetings, too many broken up when the Nazis are tipped off by a turncoat.

But Joram Lürsen’s film, concocted by a large team of screenwriters, has bankers wrapping wads of cash around their torsos, stashing boxes of bills in wine cellars and forging government bonds to float their next needed influx of guilders. It includes snatches of German raids, shootouts, street hunts and street executions, mass shootings in the snow and tiny but telling acts of disobedience.

And it has interrogations, including the one that frames the story. Gijs van Hall (Jacob Derwig) wants to know if he’s being “charged with anything.” No, they just want to know “how you did it.” So he tells “them.”

His brother and fellow banker Walraven van Hall, “Walli” (Barry Atsma, animated and sweaty) was just 35 in the second year of the German occupation  when he was approached by a former Navy man (Raymond Thiry). Friends and business associates are disappearing, and a Jewish family he had dealings with has just committed suicide.

“Mr. van Hall, don’t you agree that it’s time to fight back?”

Walli used to be a sailor himself, and now in the darkest days of Occupied Europe, he has a chance to do something. It begins with an underground Seaman’s Fund, to feed and take care of the families of Dutch sailors serving the Allies out of Britain.

But it grows into a nationwide network of cash transport, printing operations, financing the spiriting of downed pilots out of the country and paying upkeep for those in hiding.

His wife (Fockeline Ouwerkerk) disapproves, “But of course you must do it.”

Even his buttoned-down banker brother Gijs is enlisted, but only Walli has the cool code name. He’s explained his seafaring past to his little boy on a Sunday sail on the Zuiderzee, wishing he could have been a pirate instead of a banker. Who? “Like Van Tuyl,” a famous Dutch pirate of the Age of Sail.

Walli is Van Tuyl, criminal mastermind of moving money around under the noses of the Germans (“We’re smarter than the Germans, anyway.”) and his penny-counting Dutch banking masters — some of whom are on board his scheme, most of whom are too fearful and entirely too comfortable to share the risks.

It is “bank fraud,” after all, they point out. Patriots.

“The Resistance Banker” takes the time to show just to what extent life went on for the rich and connected under the Nazis, the clubs that were still open, the cars they could still drive, the lifestyle they could still afford and the cinemas where they could go and secretly meet amidst the latest newsreels hailing the achievements of the Wehrmacht and Luftwaffe, even as the war turns decisively against them.

“I’ve seen this one,” Walli jokes to his comrade, Jaap (Jochum ten Haaf) when he gets up to leave. “Too many ‘bad guys.'”

There’s little of that “Great Escape” levity, here. This is deadly serious business. Even as they’re outsmarting the “best people” the enemy has on duty with bluffing brinkmanship and native cunning, repeated reminders of the stakes pop up.

People die, and as the Nazis retreat all over Europe, their desperation and that of their otherwise doomed collaborators rises. Manhunts and mass shootings increase, and the Allies are always just over the horizon, liberation so close but (for many months) just out of reach.

It’s all a bit too financial in the early acts, which makes “The Resistance Banker” informative and novel, but also patience-testing. It even manages the occasional poetic touch — memories of small boat sailing and the tragedy that almost separated the brothers in their youth. The serious action beats, the tragedies that loom for many of those with the guts to try this, that’s all in the very long and grueling second half of the film.

But the acting is across-the-board solid, and there’s entertainment value in having Gijs sputter, “We’re BANKERS, not Resistance fighters,” and righteous delight in rounding up the kids to watch the scheduled “fireworks” — the sabotage of a records repository that allowed the Nazis to more easily ferret out communists, Jews and veterans who might be inclined to fight back.

It doesn’t stand with the more exciting Dutch films on this era and on this subject, “Soldier of Orange” and “Black Book.” But it fills in a little more of the picture of how those soldiers fought, who paid for the Black Book and bought the car, filled the tank and rented the safe house. And it showcases the long-unknown risks even the money counters were willing to take to fight tyranny.