Movie Review: “The Nun”brings Convent Discipline to the “Conjuring” universe 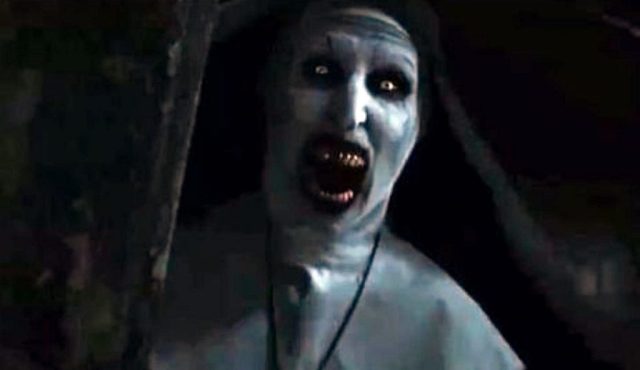 The tittering didn’t let up during the showing of “The Nun” I attended. But it had little to do with the jokes in the picture. Maybe a little.

No, this was due to the guy — possibly tipsy — who launched into the hiccups at about the 30 minute mark. He didn’t lose them until the Grand Guignol finale, which tells you something about the quality of the frights of this latest constellation in the “Conjuring/Annabelle/Amityville” Universe.

The prequel set decades before Vera Farmiga and Patrick Wilson won Jobs for Life as those supernatural hucksters, the Warrens, is about a haunted convent in Romania where a nun dies. The Vatican sends an unflappable “modern” priest/scholar with a troubled past (Demian Bichir) and a novice nun who has visions, and who apparently doesn’t register shock or fear, no matter what she sees or experiences.

The village is a bit spooked. The helpful delivery guy Frenchie (Jonas Bloquet) is their only guide. If they can tear him free of the bar. If he can stop making eyes at Sister Irene.

It’s a gloomy ancient convent, seemingly designed by Hieronymous Bosch and haunted by — wait for it — “The Nun.” If they can survive being buried alive, chased, choked and hurled by “The Nun,” who never seems to want to finish any of them off, they just might solve this mystery, which ties into other “Conjuring” conjurings.

Evil Sister Valak of “The Conjuring 2” is messing with the sisters and “poisoning” the nearby town, and must be thwarted. The convent’s Catholic solution? “Perpetual adoration.” Somebody’s got to be praying, in Latin aloud, at all hours of the day or night.

Sister Irene knows enough Latin to pitch in, which is lucky because “only prayer will get us through the night.” Father Burke, meanwhile, catches up on his reading.

The formidable Bichir gives us both shuddering reactions to the various unholy threats his Father Burke faces, and a kind of “Keep calm and Carry a Crucifix” stoicism.

Ms. Farmiga the younger is hard-pressed to seem even as scared as we in the audience are supposed to be. Perhaps she’s seen the trailer. You know, the one that gives away every scary bit in the movie. That crazy gaping hole from Hell Sister Valak is always RIGHT behind her.

There are completists who have to see every movie in a “universe.” The phrase “The studio saw you coming” applies to them.

For the rest of us, that trailer, sampled for free on Youtube, should be enough — a taste of the effects, a hint of the Big Frights, and heaping helping of Romanian gloom in the wide shots mixed in with the extreme closeups that are supposed to scare us out of the hiccups, sooner rather than later.