Posted on September 6, 2018 by rogerinorlando 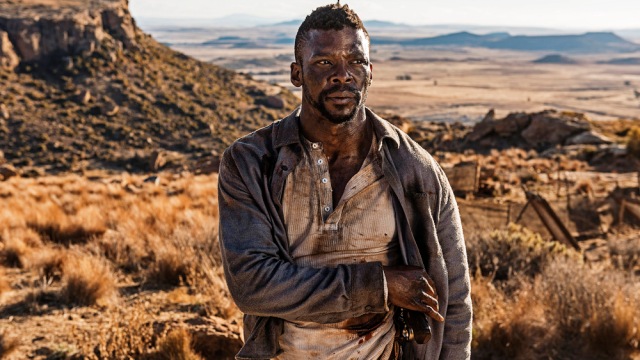 “Five Fingers for Marseilles” is a modern day Western, a tale of revolutionary South Africa and its aftermath, a world of blood, revenge, “stepping in” to right a great wrong, and fighting back.

It’s a Sotho “Shane,” brutally beautiful and iconic, fraught with symbolism, harrowing in its violence and its consequences.

Years ago in the “Railway” outskirts of the Sotho hillside town of Marseilles, young friends endure lives of Apartheid, police shakedowns and a justice system wholly meant to keep them poor and in their place.

They stage fights with their slingshots, a couple of them dreaming of the day when they can use something more lethal. “If we don’t give them something to fear, they won’t fear us.”

Zulu “the fearless,” is their leader, Lerato their female “heart and soul,” Luyanda (Cockroach) “the broken one,” Bongani “Pockets” is “the rich one,” Tau “the lion” is the ruthless fighter and Unathi “Pastor” “the storyteller,” who tells their tale.

Yes, there are six of them, but as Lerato is a girl, young sexist Pastor calls them the “Five Fingers for Marseilles.”

When they load their slingshots to attack the cops who show up to shake them down circa 1979, the kids attack and Lerato is taken prisoner. Tau, who instigated the attack, intervenes. Three cops are killed and he’s on the run, leaving the others to fight on without him.

Decades and much violence later, Tau (stoic Vuyo Dabala), “the Lion of Marseilles,” is released from prison. He makes his way back, incognito — “Nobody” he calls himself.

Railway has many of the same old residents. Bongani (Kenneth Nkosi) is now the mayor of New Marseilles. Lerato (Zethu Dlomo) is widowed, with a boy (Lizwi Vilakazi) itching for a chance to prove himself, violently. Cockroach (Mduduzi Mabaso) is a brooding, corrupt cop — part of the problem, now. Because Railway, and indeed New Marseilles is run by a one-eyed gangster/shaman called Ghost (Hamilton Dhlamini), a pontificating murderer who lets his murderous minions, and minion in chief (Warren Masemola, fearsome) run roughshod over the locals — black, white and Chinese.

The drunken traveling salesman Honest John (Dean Fourie) figures “Nobody/Tau” to be a “stepper-inner,” and if ever there was a town that needed stepping in, it’s this one.

Everybody, good and bad, looks to “Nobody,” a “hard man” with a History of Violence, to bust heads and set this world right. But that’s not easy for a man sickened by violence, fretting over the example he sets to “the boy” — “You don’t want to be anything like me.”

But if you know your Westerns, you know that won’t hold.

Director Michael Matthews, working from a script by Sean Drummond, tells this tale in broad, slow strokes and three languages (subtitled Xhosa, Sesotho and English). There are beatings, torture scenes and heroes shot and left for dead.

Ah, but are there “heroes” in all this? That’s the big metaphor they’re playing around with.

The violence has a heightened Spaghetti Western quality at times, with men going at it with six-shooters and machetes, and everybody having to choose sides before the Gunfight at the Railway Corral.

One of the benefits of working within a tried-and-true genre is that you can skip along through some of the preamble, but Matthews rarely does. An eighteen minute prologue and a 20 minute finale (drawn out) are separated by a lot of somewhat confusing middle story where grown-up versions of the teen “five” are only reluctantly identified.

Dabala, of “Invictus” and “Mandela: Long Walk to Freedom,” is impressive as the lead, and Masemola (“Blood Diamond”) and Dhalamini fine, frightening versions of Jack Palance and John Dierkes, if you know your “Shane” lore.

Stately pacing, sadism and misdirections about which character is which as adults aside, “Five Fingers” holds together quite well, even if the screenwriter never — from first scene to finale, ever gets the “finger” count right.