Documentary Review: A “listening tour” of Trumpland reveals all in “American Chaos” 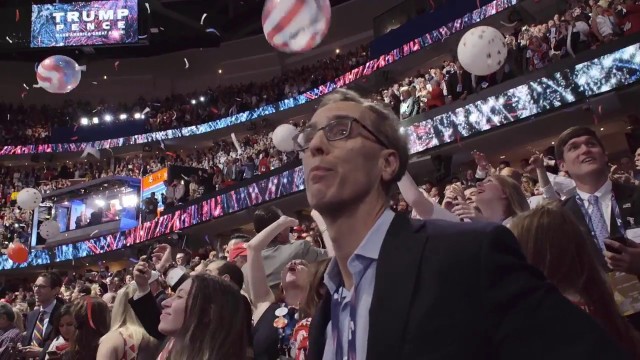 “American Chaos” is a political documentary of the “How we got here” variety, a filmmaker who ISN’T Michael Moore looking at America’s political divide by focusing on the last presidential election, as it was happening, to dissect what the appeal of the eventual winner, Donald Trump, was to his supporters.

It doesn’t hurt the film that it opens a week before Michael Moore’s latest Jeremiad, “Fahrenheit 11/9.” Film producer and sometime director James D. Stern has put movies as varied as “Looper” and “”Harold & Kumar Go to White Castle” in theaters, and directed and or produced documentaries about sport (“Linsanity” “Michael Jordan to the Max”) and politics (…”So Goes the Nation”). He knows how to position his movie in the marketplace, not a Moore lecture, but a “listening tour” visit to the heart of Trump’s America, letting Trump supporters, in their own words, teach America their way of thinking.

He took a film crew from Florida to Arizona, West Virginia to the 2016 GOP Convention in Cleveland, putting Trump backers on camera, rarely debating or even correcting them, “just to listen, take it in,” allowing only the occasional academic expert on group psychology, media consumption or history into the film to speak on what he was gathering from the Americans in the “Make America Great Again” hats.

Coal country folks, most of whom have never been down a mine, Cuban immigrants in Florida, ranchers, campaign volunteers and others tell Stern, without the benefit of knowing what would come in the next two years, of their unalloyed joy at hearing a campaign message and a candidate who was telling them, at long last, what they wanted to hear.

Stern starts out flummoxed, as if he wonders why nobody but him remembers that 1950s TV Western “Trackdown,” which featured a traveling con-artist, an Oz the Great and Powerful named “Dr. Trump,” whose naked appeals to fear, greed and paranoia (“I can build a wall around your house that nothing can penetrate!”) win favor in the town, until sober-minded voices prevail.

Stern marvels at how many people in Red State America have “this desire to go back in time,” to the pre-integration, coal consuming, pre-immigration flood, binge-buying 1950s.

It’s been a common thread among the hand-wringers over the 2016 election, “We weren’t listening,” a self-reflection/self-blame mea culpa that, coupled with with Hillary’s infamous “deplorables” remark, Russian-Wikileaks interference and James Comey’s decision to throw the election to Trump,  which people use to “explain” what happened to the vast majority of Americans who don’t approve of what happened.

“American Chaos,” with Stern occasionally interjecting his in-the-moment fears about the tide of that election, then proceeds to — almost by accident — figure out the real “listening” problem America has.

“Do you HEAR yourselves?”

In interview after interview, white people ranging in age from their 50s to 70s, reveal that they aren’t listening to what they’re saying. A nation divided by what conservative pundit George Will warned was the coming “information gap,” with a corner of the population willfully misinformed and hellbent on staying that way by leaving the TV or smart phone on Hannity and Jones, Rush and Breitbart, refuses to step out of the echo chamber and accept facts and reality. And when they open their mouths, it shows.

A Florida political operator who notes that America “was its happiest in 1957,” and  Cochise County Arizona rancher Republicans with their ground-level front-line views of immigration give us a word or two of compassion, and a lot of less delicate words directed to “get Washington’s attention” about this issue, and about their “gun rights.” We hear them.

And then there’s the seething, gimlet-eyed hatred, the smug certitude of an Arizona vet (a woman) who blames “those women” Trump was bragging about grabbing and molesting, and insists with all the vitriol she can summon that Clinton is “a traitor. If it was you who did what SHE did, we’d be having this conversation in jail.”

Wonder if her definition of treason has sharpened?

A wealthy Floridian breaks down in tears about West Virginians, “where I like to hunt and fish,” how troubled and “sick” they are, without figuring out that they’re sick from black lung and opioids, meth and a system — economic to educational — they set up themselves to fail themselves — a “conservative” system that is killing them.

Cuban immigrant and former Hialeah, Fla. Mayor Julio Martinez says “I look at Trump, and I see myself in the mirror.” Really?

Brian Beddow, his face frozen in a furious Appalachian glare, declares “Trump’s MORALLY better’n Hillary,” and makes a veiled threat or two about uses of “our guns.”

And then Iris Lynch, a self-described “MENSA” (society of the super smart) member parrots far-right talking points, how every new revelation about Trump’s character, business dealings, corruption and ignorance is just “orchestrated baloney.”

“The Democrat Party is no better than Gaddifi,” which she mispronounces, suggesting “They’ll chop off our heads.”

Their hatred of Hillary, sometimes delivered with fury, other times simply matter-of-factly repeating every disproved “conspiracy” that “I read” about “voter fraud” and “take our guns” and “global government,” spinning emails into “treason” and unwilling to consider the fact-based/investigated alternative, is just chilling.

It would be grand if Brian Beddow, Iris Lynch, or others like the hilariously hypocritical pastor and his gun-nut wife, saw this and thought, for the first time in a very long while, “Wait, I make no sense. Maybe I’ve been wrong.” But you know they won’t.

With conservative newspapers like the Arizona Republic warning the faithful about what a Trump presidency would be like, with pundits, news stories from legitimate news sources, other Republican politicians and relatives echoing that, with all of those dire forecasts coming true with accounts of White House “chaos,” staffers griping about the “f—ing moron” in charge, endless indictments, ethical resignations and only the Chinese-owned Mitch McConnell standing in the way of Trump’s legal, prison-bound comeuppance, the deafness of the portion of the electorate represented here is…deafening. 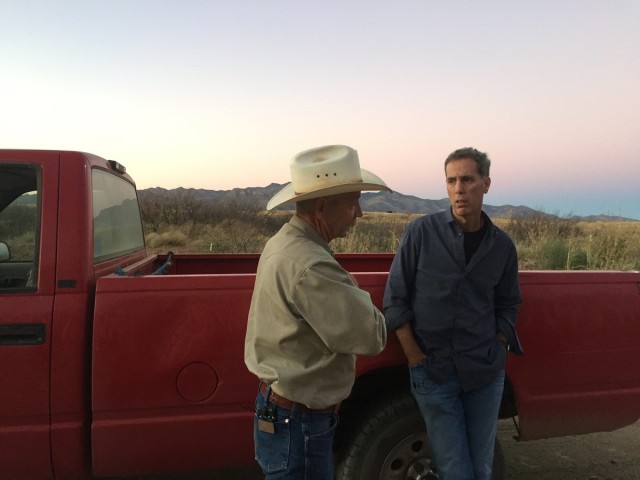 What gets drowned-out are the even-tempered complaints of rancher John Ladd, who notes the “big money” that keeps anything from being done about illegal immigration, and reasons”The Republicans want cheap labor, the Democrats want cheap votes and the American People want cheap tomatoes.”

Having a UCLA academic point out that what Trumpists “REALLY” miss is “not having to think or hear about race,” 1957 — in other words, when black and brown people had fewer rights than the rest of us — he’s spitting in the wind. Another academic pointing out how people hate being labeled “racist” worst than anything doesn’t take into account how much racists hate being labeled “deplorable.”

The enraged, knee-jerk reactions to “Black Lives Matter,” refusing to even consider that “those people” might have a point, the few times that Stern lets himself correct a baldfaced, ignorant lie, endlessly repeated in the GOP echo chamber, with “There are no facts to support that — none,” all fall on, you guessed it — deaf ears.

Stern is entirely too concerned with being proclaimed a prophet — analyzing America’s “Who would you rather have dinner with?” rule of thumb about political candidates, telling the camera during the GOP convention and later about how sure he was –at that moment — that Trump was going to win.

So there’s one thing he has in common with Michael Moore.

But he gives the “We need to listen” meme one last, thorough going over. “Forgotten America” gets its say about immigration, “work hard to get everything you have” and West Virginians admit that they didn’t adapt, “diversify when we had the chance” as they’re showing off what used to be a mountain covered in trees that’s now a chopped-top mesa with scrub growing back “like there was never a mine here.”

It doesn’t take a hectoring Michael Moore or patronizing Dinesh D’Souza to properly account for “what happened” and “who these people are, and why” they supported Donald Trump.

It turns out Trump supporters, “in their own words,” is the most damning portrait of them imaginable. You need to listen to yourselves.

MPAA Rating: R for some language including sexual references