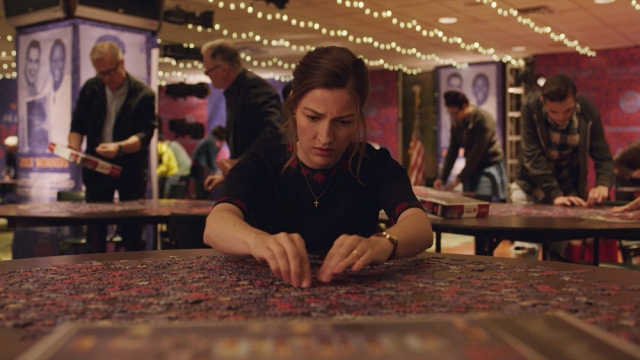 “Puzzle” is a lightly charming New York variation on “The Lunchbox,” another aching tale of romantic longing and disappointment about a lonely married woman who tumbles for the soulful charms of Irrfan Khan.

This time Kelly Macdonald is the housewife trapped in a suffocating, unfulfilling marriage who falls for the sleepy-eyed Indian stranger. “Puzzle” becomes that rare vehicle to make full use of the baggage the sweetly-mousy Macdonald and the droll, sensitive Khan bring to their movies.

Agnes is the child of immigrants, living in the house she grew up in with her high school beau, Louie (David Denman), a mechanic, and their two college age sons.

Her life is built around “taking care of” the other three, a submissive wife who volunteers at church, takes a back seat in every decision being made and when we meet her, is lighting the candles on the cake she had to bake at the party of mostly-his-friends she had to organize — for her own birthday.

She’s not a worldly woman, and that makes her come off as a little dim. The iPhone she got as a present rattles her need for simplicity, quiet and that tiny shred of independence that she enjoys in her Luddite life.

“Would somebody please tell my mom she has to stop living in the 20th century?”

It is another gift that changes Agnes’ life. It’s a jigsaw puzzle. We glimpsed her aptitude for reasoning out shapes and missing pieces when Louis broke one of her dishes. Now, she takes to this thousand-piece challenge with relish.

She tears through it in a flash. She calls the relative who gave it to her, wanting to know where she can get another? She’s that sheltered. That leads to her first trip in ages from Bridgeport to the Big City, tp the puzzle shop where she finds what she’s looking for and the flier that piques her curiosity.

Robert (Khan) lives in a beautiful old house in New Rochelle, a man of means with a maid and a lot of idle time on his hands. She takes the train to his house and he dumps a puzzle on the table.

Whatever else she doesn’t know, whatever her limited life has kept from her, Agnes is a damned jigsaw savant, a “godsend…It was meant to be,” Robert enthuses.

And thus begins their training in the arcane sport of competitive jigsaw puzzling.

She is shy and just coming out of her shell, he is wounded and a little aimless. She has to lie to her husband about where she’s going and what she’s up, because he thinks, “Children play with puzzles, Agnes.”

But as the Agnes and Robert puzzle away, tinkering with their mismatched techniques, the odd personal question gets answered. He starts calling her by her given first name, Marta. She understands the sort of mind that obsesses over every disaster on cable news, a man who craves the order that comes from disorder in solving a puzzle.

And of course, there’s “The Big Game” cliche that they’re prepping for, the Nationals. With that comes a prize, a trip to the Worlds, in the capital of Belgium. She doesn’t know about that.

“You don’t want a free trip to the ancestral home of the Brussels Sprout?”

That line and Khan’s dry, fatigued and yet effortless reading of it should be a tip. If Hollywood wants him for a movie, this is the sort of part they should be offering and not villains in bombastic “Jurassic World” movies. He has the effortless charm all the great romantic leads possess. 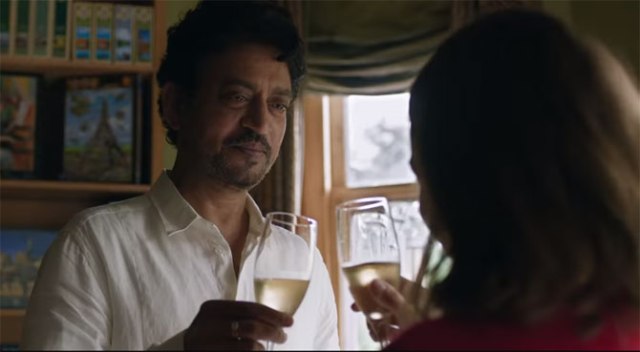 Macdonald has a gift for getting across a Gandhi-like passivity built on top of steel. Agnes may put up with a lot. She may not have a clue what her hip, smart younger son’s vegan/Buddhist girlfriend (Liv Hewson) will eat. But the other son, the drowning in garage work older son (Bubba Weiler) catches the wince in her eyes when Buddhist-girl explains her belief system over dinner.

“We have to give up on the idea of ever being happy.”

Every disaffected wife movie has certain touchstones, and how well they work depends on how easy it is to sympathize with the woman’s plight. Louie is appreciative, but insensitive, never thinking she’s smart enough to be in on the Big Decisions he always has made for them.

The husbands always snore in these movies.

The wives, be they “The Prize Winner of Defiance, Ohio,” the bored, repressed English suburbanite who craves “The Escape” or the Indian woman whose care filling “The Lunchbox” is wasted on an insensate lout, have varying degrees of justification for their wandering eye.

Agnes’ tiny world is suffocating her, and Louie’s chief sin is not seeing that. Seems a little weak, but as she fibs and keeps up the charade, Agnes loses all patience with a lifetime of grievances with him and their sons, justifying her actions to herself, at least.

Director Marc Turteltaub is far better known as a producer, with indie classics from “Little Miss Sunshine” and “Sherrybaby” and “Chop Shop” among the projects he helped get before audiences. He has a light touch behind the camera here. His chief contribution was recognizing the perfect people to play these two leads and letting them play to their strengths.

“Puzzle” doesn’t get lost in its jigsawing subtext, thankfully. It lets us get lost in new discovery, finding common ground, the empathy that grows with getting to know someone and finding they appreciate you in ways others don’t.

And thanks to its most engaging, sympathetic stars, even the over-familiar path it takes lets us find the warmth in the predictable first steps its characters take toward a richer life.