Posted on July 8, 2018 by rogerinorlando 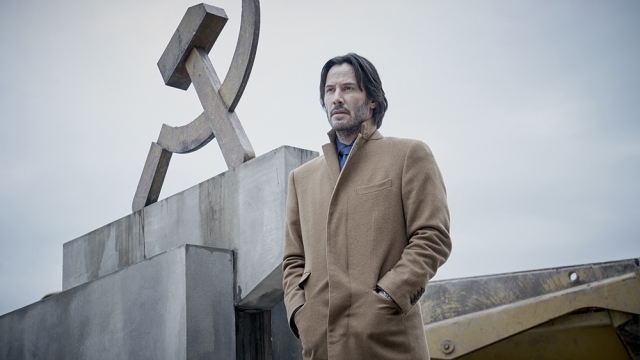 “Siberia” is tedium itself, a boring, talkative and nonsensical story that parks Reeves, as a high rolling diamond smuggler, in a remote mining town awaiting a delivery, awaiting deliverance and awaiting his next sexual encounter with the fetching, blunt barmaid Katya.

Lucas Hill (Reeves) would have happily stayed in the swank hotel in St. Petersburg where he was supposed to meet the illusive Pytor and pick up some blue diamonds. Ransacking Pytor’s room doesn’t produce anything, threats over his many burner cell phones (which Hill keeps in a special compartment of his briefcase) get him nowhere.

And a Russian mobster (Pasha D. Lychnikoff of TV’s “Shameless” and “Insomnia”) is breathing down his neck for these stones. He makes threats in that oblique way Russians make threats in the movies, with an aphorism.

“Patience, Mr. Hill, is like air in a sealed room. No matter how much you start with, eventually, you run out.”

Better dash out to the provinces to see what the hold up is. That’s where he gets stranded, and gets mixed up with Katya, played by Romanian actress Ana Ularu of “Muse.” She is worn and weathered and seriously disrespected when Hill meets her. He totally misreads her and her situation, leading to a beating which naturally progresses to an indecent proposal.

“What would you do if I asked you to sleep with me?”

As Hill has a wife at home (Molly Ringwald), a lot on his plate, and it’s a small town and Katya has protective, brutish brothers, that’s a dicey proposition. Which he indulges in, repeatedly. She is smitten, in that Russians-in-the-movies way.

Reeves was cast at least in part because, like his character, we are meant to underestimate him. All these Russians switch from English to Russian to insult and plot their double crosses of him. Of course he speaks Russian.

The yokels drag him out for a chilly (it’s supposed to be winter, but nobody looks cold) bear hunt. Of course he knows how to handle s a gun.

His rival for the stones is a South African (James Gracie) with whom he has one of those loving/loathing relationships.

“And you have seen too few.”

What Ross conjures up here, working from a dull, murky Scott B. Smith script, is a lot of conversation, numerous scenes that seemingly lead nowhere and sex in rooms with Soviet Era color schemes.

It’s all heading toward a reckoning that cannot arrive soon enough, not with groaning zingers like “This is humor? American humor?” and “In Russian, when we don’t want to answer a question, we ask another in return.”

Yeah, we do that in America, too.

“Frank & Lola” was a harrowing psycho-sexual drama about the power dynamics of a tortured relationship, one built upon betrayal and the suspicion of betrayal and the raw menace of Michael Shannon. Whatever promise that picture held that attracted Reeves (He likes to travel for his indie film work, too.), it’s obvious that the director is out of his element here, and that Reeves is unable to add value with his mere presence.

“Siberia” slogs along like the failed pilot for a poorly-thought out cable series, one with Eastern European development incentives but without enough drama, incident, intrigue or plot to justify its running time.