Netflixable? “Immoral Tales” revisits the kinky and the quaint sides of The Sexual Revolution 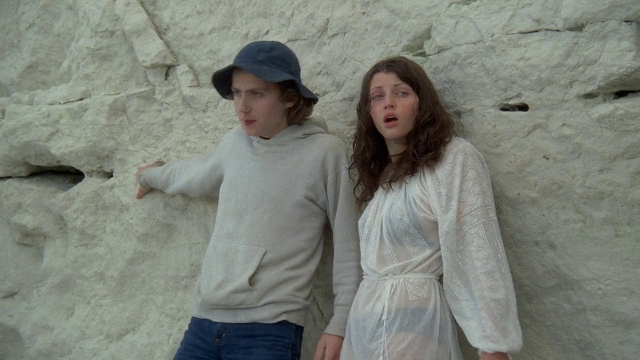 Days when the cognoscenti could say, “Oh, that’s not obscene. Its FRENCH.”

“I’ve been craving your mouth for SO long,” the gawky-young Andre barks at “gamine” Julie, sharing an intimate if not romantic moment on the rocky, chalky cliff beach in Normandy. He’s played by Fabrice Luchini, who enjoyed a long, leonine career in French films (“The Girl from Monaco,””Potiche” are two more recent credits of note). She is Lisa Danvers, who only made two films. Alas, France is as sexist about women’s screen careers as Hollywood.

Andre is commanding and demanding, and he over-explains what he’s going to do to her “untouched” lips, entreating her to fantasize over “What I will give you” (in French with English subtitles), urging her to become “a gourmand,” to think of the ebb and flow of  “The Tide.” He’s loudly, poetically calling for oral satisfaction — a BJ on the Beach.

And he’s her older brother.

The gulls caw, the waves lap, the hands wander, the tide comes in and young people get teach each other about sexuality and French hair removal practices of the ’70s.

“We didn’t come to the rocks to have fun,” Andre hectors. Not for her, anyway.

“Immoral Tales” is an anthology, a collection of episodes about desire and sexual practices, but also a movie memoir of objectification, sexism and the sexual inequality of its day.

“Therese the Philosopher”  is about a 19th century village girl Charlotte Alexandra), in petticoats and parasol, who explores the icons and artifacts of her church, hearing the voice of God as she caresses robes, statuary, the organ and the altar, “I am here,” he intones. “I shall not leave you.”

“Show me your weaknesses,” suggests where this conversation with the Almighty is going.  That earns her a whipping and getting locked, hysterical, in the attic back home. But leaving her to her own devices allows her to fondle dolls, to dally in a little dress-up and stumble across nude postcards and a book about “Therese the Philosopher,” illustrated with Old School depictions of sexual practices of the past.

And she prays and slowly strips and loses herself in sexual fantasy.

“Erzsebet Bathory” is about a countess (Paloma Picasso, you-know-who’s daughter) in 17th century Hungary, interrupting a village where cows are being milked, coleslaw is being squished, chickens are copulating and milkmaids are making love to goatherds.

The Countess is recruiting girls “pure and humble,” offering maidens the chance to “touch her dress.” But she’s not asking for them to accompany her – she’s ordering. And after ritual group showers (24 nude women), anointing with oil and serving some sort of spiked wine, the countess comes among them in a splendid bejeweled dress.

Which in a frenzy, the maidens tear off her — for the jewels. There’s a “blood of virgins” motive in here somewhere. 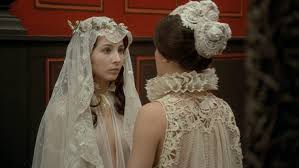 And then we get to the Borgias of Italy. All the other predilections and perversions seem so…amateurish when compared to this lot.

The acting ranges from competent to indifferent, the imagarey striking in that Bergmanesque Euro-film of the era style. Extreme close-ups, semi-erotic displays of female nudity, women reduced to body parts.

The “Bathony” story as the most unconvincing fistfight/wrestling the cinema as ever seen.

Visuals tell the “stories,” but not in any sort of brisk, engaging way. It’s a ponderous, dated and obscure male wish-fulfillment fantasy — women as objects in the sexual service of men, the ultimate “girl’s locker room” scene, assorted lesbian moments designed to titillate.

And then the Borgias sow up and the grotesquerie of even the most benign moments is thrown into sharp relief.

Credits: Written and directed by Walerian Borowczyk, based on the  André Pieyre de Mandiargues story collection. An IFC/Argos Films release.