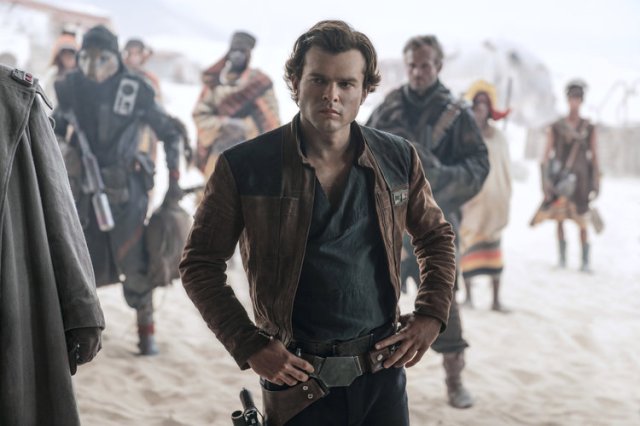 So much for the hope that the back-engineered “prequels” in the “Star Wars” universe would rescue these space operas from the bloat and boredom that J.J. Abrams and friends have given them.

“Solo: A Star Wars Story” is a two hour and fifteen minute salvage job, with director Ron Howard coming in to add a little life and a few laughs to whatever original directors Phil Lord and Chris Miller (“22 Jump Street,” “Cloudy with a Chance of Meatballs”) struggled to provide.

And the answer to that is “not enough.” The damage had already been done, mostly with casting, and entrusting the script to Hollywood nepotism, the great has-been Lawrence Kasdan (“Raiders of the Lost Ark,” etc.) and his actor-turned-not-very-good-writer son, Jonathan.

Alden Ehrenreich (“Hail, Caesar!”) is the young Han Solo in this origin tale, suggesting not so much a young, tall and hunky Harrison Ford but a young, short, grinning-until-his-eyes-squint-shut Jon Cryer or Ethan Embry.  From his first moment, his first line in the picture, he’s off.

Han is enslaved on the shipyard planet Corellia, declaring himself a pilot and trying to swipe and hustle up enough cash to get him and his smarter (as usual) girlfriend Qi’ra pronounced Kyra (Emilia Clarke) free. He’s a bit bruised up, and she’s concerned.

“You should SEE them,” Ehrenreich brags, implying “You should see the OTHER guys,” and totally hitting the line-emphasis wrong.

It happens again and again in Ehrenreich’s clumsy, nebbishy, chuckle-headed take on the future swashbuckler Han Solo. Because, apparently, there are no re-takes in spaces.

We see how Han got his surname (all alone in the cosmos, no family, he’s an Imperial recruit). We watch him meet Chewbacca, a hilarious scene reminiscent of Luke’s tangles with assorted beasts in assorted arenas in the original trilogy, and a big joke moment from “Thor Ragnarok.”

And we’re there the night he meets “ol’pal” Lando Calrissian (Donald Glover), elaborately described as a “retired” smuggler, “sophisticated,” “charismatic” “and attractive, too.”

Billy Dee Williams’ ears must be burning, even though they left out “sauve” and “debonair” from that standard-description of Williams in general, and the character he first made famous. Glover is mostly up to the task, suggesting a worldly card player who gambles with his ship at Intergalactic poker and his life as “the Kessel Run” with Han.

Han is separated from his first love, Qi’ra, and takes up with his second, the Millenium Falcon, to win her freedom from the Crimson Dawn gangster Dryden Vos, played by Paul Bettany as more whimsical and mercurial than menacing. He’s just…wrong.

The casting they nailed is giving Woody Harrelson the role of a pistol-twirling smuggler and thief named Tobias Beckett, and making the smart and sexy Thandie Newton his demo expert, second-in-command lover. But let’s screw up the gang with a four-armed digital frog thingy who acts and sounds (Jon Favreau did the voice) like a PG version of Rocket Raccoon from “Guardians of the Galaxy.”

It’s not stealing if it’s all under the Disney umbrella, kids.

The gang has to slip the clutches of the just-expanding Empire, outsmart the Hyperfuel mine owners and shippers, pull off a train heist and evade the “Marauders” bent on stealing from them them as they do.

On the plus side, the diverse cast feels organic and not forced into the “universe,” no Death Stars, no light saber duels, no “Force” and no original cast members were harmed in the making of this. Original characters’ legacies, on the other hand, take a bit of a licking.

It’s an underlit picture dominated by gloomy, shadowy visuals, visceral fights and shoot-outs and what feels and sounds like dialogue from a TV quickie “prequel” cranked out for The Disney Channel. This is the least quotable “Star Wars” movie ever.

Clarke, of “Game of Thrones,” is Qi’ra, here to sex up this spin in “A galaxy far, far away.” She has little chemistry with Ehrenreich, none of the heat that was called for and none of the adult pathos and passion that Harrison Ford and Carrie Fisher brought to their PG love scenes, way back when.

The chases are same-old/same-old involving the Falcon, Tie Fighters and some space phenomenon that isn’t the asteroid or debris fields of early “Star Wars” movies. The picture opens with a dull surface-speeder pursuit that doesn’t raise the pulse-rate at all.

There are more card games than “Battle Bots” competitions (look for Ron Howard’s brother Clint, there), more filler Falcon flying sequences than moments where anybody seems in genuine peril.

The stakes, gravitas, wit and great actors demonstrating great acting of “Rogue One,” the best of these new LucasFilms, are sorely missed.

A couple of times, Howard gets things to play as giddy — that first Han/Chewie encounter, a climax built around the sass of the newest robot character L3, a ferrous feminist voiced by Phoebe Waller-Bridge. And it’s always interesting, visually, seeing the exotic settings, exotic costumes and tech of this universe. Visiting Lando’s cape closet is a hoot. 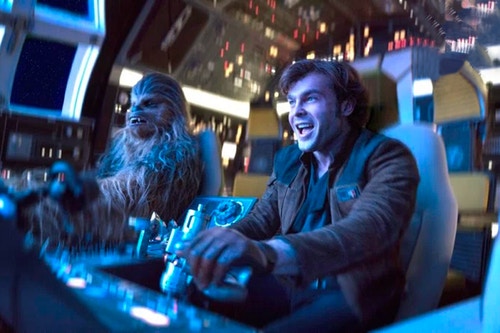 The rest of the time the accountants, Disney and Howard himself seemed to say, “OK, we’ve achieved adequate,” which gives the viewer a sense of relief that it’s not worse. Since we aren’t seeing the original directors’ vision, just their (and J.J. Abrams’ casting), we can only guess how bad things were going beforehand.

But “adequate” is not what we want or expect from a “Star Wars” story.