Movie Review: “Backstabbing for Beginners” isn’t as Glib as its Title 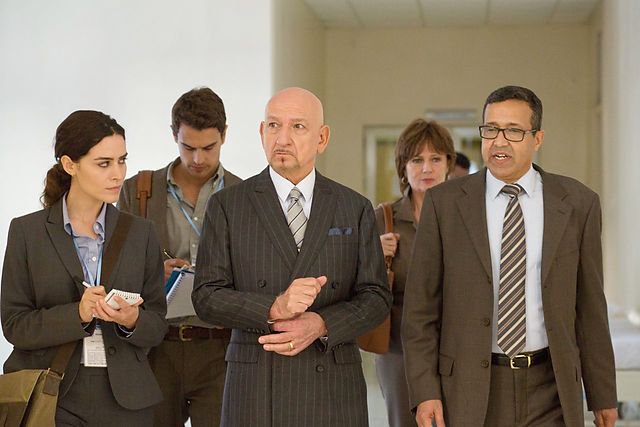 Theo James has the poise if not the gravitas to carry the new skullduggery-at-the-U.N. thriller “Backstabbing for Beginners.”

The “Divergent” hunk has to animate a generally dull account of the hopelessly corrupt, sadly-necessary “oil for food” program the United Nations ran during the years Saddam Hussein’s Iraq was under international sanctions for its aggression and pursuit of “weapons of mass destruction.”

Danish director Per Fly (“The Inheritance”) and screenwriter Daniel Pyne (“The Manchurian Candidate”) have made a film of meetings, office politics, underworld connections, murder and romance. But mostly meetings. It’s all James and the always entertaining Ben Kingsley can do to get it up on its feet, much less sprinting forward.

James plays Michael Soussan, a Danish born son of a diplomat whose father was killed in Lebanon, and who can’t see squandering his high-priced education on a lucrative career in finance.

“I want to make a difference,” he tells his U.N. interviewers, every time he interviews there. That’s where he wants to work. At 24, he lands work as the Assistant to the Undersecretary General the way jobs are landed by those of his class.

“I knew your father,” the undersecretary, “Pasha,” purrs.

Kinglsey’s Pasha schools the impressionable kid with a blend of fatherly indulgence and testy profanity. His blurted f-bombs and oddly-timed curses are disarming and amusing. But the previous assistant died in a car accident in Iraq. The “accident,” whatever Pasha says, deserves to be discussed in skeptical quotation marks.

It’s 2002, in the months leading up to the U.S. led invasion of Iraq, and Pasha is in charge of Oil for Food program. That was supposed to keep money out of the hands of Saddam Hussein, funneling cash straight into food, medicine and the stuff of life for the Iraqi people. But with all that money and oil at stake, Iraqi thugs, international hustlers and con artists and highly-placed Bad Actors in assorted countries and within the U.N. itself were suspecting of “gaming” the system.

Michael’s warned of that  by a C.I.A. agent (Aidan Devine) before his first trip to Baghdad. Will he do the right thing? You know, pass on any funny business he observes?

The trouble is, everybody’s got their agenda. The C.I.A. is hunting for an excuse for Bush to order an invasion. The Iraqis, under a leader they’ve nicknamed “The Angel of Death,” bristle at international control and are murderously intent on breaking free. The oil profiteers are hellbent on getting cheap crude they can flip on the open market. The big contracted suppliers don’t mind selling expired medicines that they’re sure no one will check.

And everybody, at every step of the process, is taking a cut. That leaves the people, most particularly the Iraqi Kurds, starving and dying. Just not in the numbers they were in the days before this program was cooked up. Progress!

“The first rule of diplomacy, kid, is ‘Truth is not a matter of fact. It’s a matter of consensus.'”

Pasha is part cynic, all-realist. He’s jockeying for position with an inter-U.N. foe (Jacqueline Bisset), trying to get Michael to “chose your facts carefully” in reporting the “success” of the program. Photo ops and reports that maintain funding, “our continued existence,” is job one, he says. His rationale?

“What’s the alternative? Doing nothing?”

A pretty, sad-eyed young translator for the program (Belcim Bilgin) is closer to Michael in idealism. She wants the world to know the truth. But even she might be “a honey trap,” someone with an agenda all her own.

Bisset makes her French official officious, blunt and furious. Kingsley is an old hand at making even those we know are villains twinkly as well as imposing.

“Backstabbing” makes an interesting run at painting the many shades of grey in this corner of diplomacy. The mature U.N. under Kori Annan was hidebound and corrupt, largely a consequence of filling its ranks with opportunists and pocket-liners, some from the First World, many many more from the Third.

But as Pasha, a Cypriot whose real name is Benon Sevan, points out, there are things that have to be done and awful, corrupt places where they need to be done. And what’s the alternative? Doing nothing?

This Danish/Norwegian/Swedish/Canadian production muddies the waters of Soussan’s expose of the U.N. culture and the program. Soussan’s title promises a more flippant treatment than the subject will allow. Sadly, for all the murders, the threats and intimidations, Fly’s film takes barely a moment to show the real victims of the crimes — starving, sickly people under the thumb of a dictator it took a president with impure motives of his own to take out.

Miscast, bland “Bad Actors” abound. Pasha? Kinglsey does his best to make us think this guy could swing either way.

And washed away in this sea of shades of grey is the colorless Mr. James, not emotive enough to suggest the passion Michael is supposed to have for “making a difference,” under-reacting to seeing Iraqis in his employ murdered right before his eyes, under-selling the fear Soussan must have felt, underwhelming us with his sense of love and concern for the lovely, passionate Nashim (Bilgin).

Like Pasha, who got the blame for the scandal when it erupted, James make take the hit for “Backstabbing” not coming off. But like Pasha, he’s just part of the problem, a figurehead on an international production rife with dramatic, scriptural and casting compromises.

MPAA Rating: R for language throughout, and some violence

Credits:Directed by Per Fly, script by  Daniel Pyne. An A24 release.