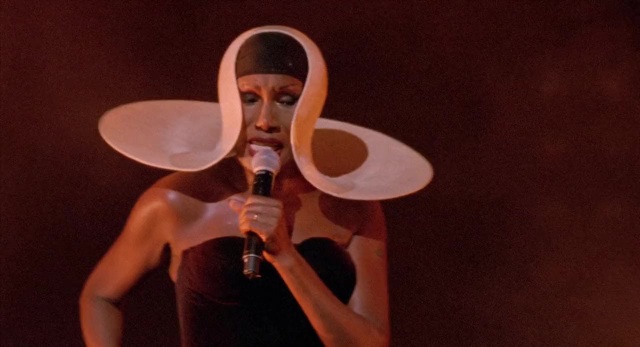 On the cusp of 70 (her birthday is in May), she still tours, still makes appearances, still greets her fans at the stage door.

“Would you ever do another movie?” one adoring acolyte blurts out while getting an autograph.

“Grace Jones: Bloodlight and Bami,” tells her story in her own words and in remembrances of friends and family. It takes her from concert stage to music video recording to backstage to “back home,” Spanish Town, Jamaica, where this preacher’s daughter got her start.

Editor and documentary filmmaker Sophie Fiennes (Ralph and Joseph’s sister) delivers the diva to her (mostly, but not entirely gay) fans in a nearly two-hour version of “My story,” catching her performing her hits, switching languages and accents the way she changes her look — “Going native now, darling.” — her persona and her vibe.

We see Jones drop the New York accent she acquired by growing up in Syracuse (from age 13) upon her return to Jamaica, catching up with producers she worked with in the past, family and friends she grew up with there and taking on a Jamaican patois when trying to charm them, or bawl out those who keep her waiting, act unprofessionally or show her up.

The film captures her making her most recent autobiographical, reggae-flavored confessional album. And we see her endure a dazzling French music video shoot of her famed disco “La Vie en Rose” cover. “Tacky,” she says of the set. “Bite the bullet,” she grins. “This is paying for my record.”

But a lady has her limits.

“This makes me look like a lesbian madam in a whorehouse!” she insists to the director, in fluent French. Can they re-shoot it without all the scantily clad chorines?

“We are visual artists,” she explains backstage. “We know what this looks like.” And later?

“You have to be a high-flying bitch, sometimes!” 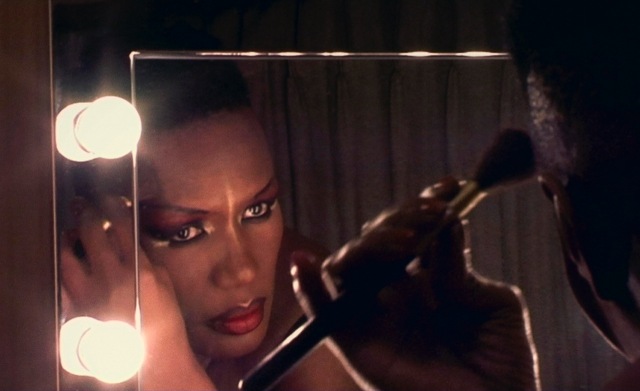 She comes off as the very picture of glamour onstage — higher than high heels, stunning makeup, masks, singing “Slave to the Rhythm” while spinning a hula hoop.

Her influential image-builder, style consultant and the lover who gave her a son, Jean-Paul Goude catches up with her and gets a “You’re the one who made me weak in the knees” confession. Her mom sings at her brother’s church and we see where the call to perform came from, even if Grace rebelled against a strict “No open-toe shoes, no makeup” upbringing.

And offstage, there is one truly unguarded moment, out of makeup for a “champagne breakfast, confessing in an upstate New York accent that we never, ever hear.

It shortchanges her fashion runway years, doesn’t use archival footage of her peak years in music, fashion and movies. “Bloodlight and Bami” may be mostly for her most faithful fans, but it makes for an interesting, just-revealing-enough portrait for those who only know her from the image she’s created and the music that rarely made it out of the clubs, back in the day.

MPAA Rating: unrated, with some profanity