Netflixable? “Beer, Pizza and Smokes” is an Argentine underbelly drama that feels timeless, and ahead of its time 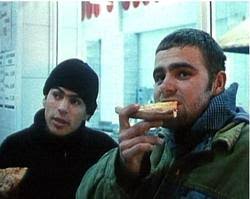 It’s not over-selling the gritty Argentine crime drama “Beer, Pizza and Smokes” to suggest it has hints of Truffaut’s classic “The 400 Blows” about it. Or “Dead End Kids,” “Kids” or “Rebel Without a Cause.”

There’s an underworld that five miscreant, 20ish friends scuffle about in. They make their hand-to-mouth way by stealing, low-rent heists in corrupt, crime-riddled 1998 Buenos Aires.

It’s a film that gained little notice in North America when it was made, little more when it was released in the U.S. in 2005, seven years after it was filmed. But it’s a simple, over-familiar story told with nerve jangling verve.

Cordoba (Héctor Anglada) takes his name from the city where he was born. He’s the impulsive, hothead amongst this circle of friends, the one up for any job, any prank. But adulthood is staring him in the face. His girlfriend Sandra (Pamela Jordán) is pregnant.

He’s done one too many taxi holdups, in which he and a couple of his pals — usually the steady ut asthmatic Pablo (Jorge Sesán) and up-for-anything Frula (Walter Díaz) — duck into a cab which already has a “rich” fare, and proceed to rob the hapless customer.

Who never has the cash they’d figure he would.

The cab driver, “the boss,” is in on it. They rob a legless street musician to supplement their “income.” And yet none of these heists can afford them anything more than the movie’s title — “Pizza, Beer and Smokes.”

Sandra’s had enough, and in the words (in Spanish with English subtitles) we’ve heard in  a century of underworld pictures, she kisses him off.

“If you want me back, get a job. Like NORMAL people do!”

So the pressure’s on Cordoba to make that “one last score.” So he, Pablo, Frula and the hapless drunk Megabom (Alejandro Pous) who can’t even be relied on as a lookout, join the older Ruben (Adrián Yospe) for one of those heists where everything goes wrong. Or so they think, until the heist after that.

Few movies have captured the Italianized Spanish and mannerisms of Argentina better than this one. The gestures, gritty texture of the cinematography and grimy streets filled with gutted cars, the driveable ones worn out, missing parts and covered in rust or primer, make this feel like an Italian neo-Realist thriller shot in New York in the ’70s.

Neither Caetano nor Stagnaro has ever made a film that made any splash north of the border. But they tap into a reckless energy that makes these lowlifes likable.

There’s no honor among these thieves as they swipe smokes and cash from each other, just enough to score that pizza or beer, which is all they can ever afford, which they have to consume standing up because street vendors offer no seating.

No wonder Sandra, heavily pregnant, wants out. A mom-to-be needs to sit.

The story may not hold many surprises. Idiot crooks do not get smarter by aiming higher, scoring guns and thinking — if that’s the word for it — big.

But “Pizza, Beer and Smokes” distills the essence of wayward youth like few Hollywood films of recent vintage, nervous with rebellion, even if they, like generations of North Americans, don’t really know what they’re rebelling against.