Movie Review: Couples fun gets out of hand on “Game Night”

Posted on February 21, 2018 by rogerinorlando

First of all, do NOT try this at home. If somebody suggests “Let’s kick ‘Game Night’ UP a notch,” change the subject. Maybe suggest a nice sophomoric drinking game instead.

And at the first mention of “You know what I hear the super rich do? ‘Fight Club’ with homeless guys!’ — run. Go home and break out Scrabble and be glad you did.

“Game Night” is “Date Night” with blood and bullet wounds and beatings and blood stains that you will never ever get out of the rug, the white Maltese or what have you on the day AFTER “Game Night.”

It’s a gonzo spin on what happens when SOMEbody suggests “kicking things up a notch,” when Jenga isn’t enough anymore.

Jason Bateman and Rachel McAdams strike comic gold — or at least silver plate — as a hyper-competitive game-crazy couple whose suburban couples gaming party goes way off the rails when an equally competitive globe-trotting/high rolling brother to the husband (Kyle Chandler, cast against type) comes home, initiates a murder/kidnapping mystery game that is in turn hijacked by real hoodlums who play for keeps.

Only the couples — McAdams/Bateman, Kylie Bunbury (“Under the Dome”) and Lamorne Morris (“New Girl”), and Sharon Horgan (“Catastrophe”) and Billy Magnussen (“The Big Short”) don’t know things have turned real. Not at first.

What screenwriter Mark Perez (“Herbie Fully Loaded”) and co-directors John Francis Daley (“Vacation”) and  Jonathan Goldstein (“Horrible Bosses”) put them through is an absurdly complicated, violent and self-aware farce — a night-long chase through the mean streets, often in conflict with real bad guys whom they don’t realize aren’t just “actors” with Murder We Wrote, the mystery staging party company.

Jeffrey Wright does his version of “bad dinner theater” as the Murder We Wrote “FBI Agent,” Danny Huston and Michael C. Hall (“Dexter”) are “real” villains and Jesse Plemons just slays as the lonely, newly-divorced creepy cop neighbor who cares too much, observes too much and is never asked to come to game night any more because he’s a serious stiff.

Characters have varying skills at charades and Pictionary and “Never Have I Ever.” And they’re ALL good at nailing comic movie quotes. None is funnier than McAdams, who gets to hilariously act out the hostages in the diner opening to “Pulp Fiction,” never realizing she’s waving a real gun at real bad guys who really need to be taken hostage.

“And the Independent Spirit Award goes to…” 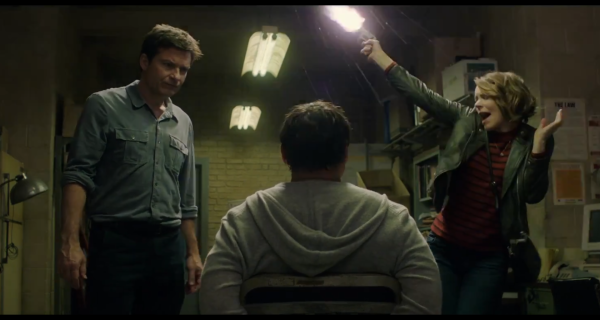 The banter crackles, here and there, with Bateman’s Max toting around resentment of his better looking, more successful brother Brooks (Chandler), and everybody else knowing it.

A clever running gag — establishing shots, street scenes and traffic scenes and cul de sacs are illustrated in detailed models which dissolve into the photo-real scenes the action takes place in. Another? The woman are the bright ones, the guys seem to stumble through clues and strategies.

Ryan (Magnussen) has a thing for dopey models. “Where’d you find her? TED Talk?”

And Kevin and Michelle (Morris and Bunbury) have let Denzel come between them. Maybe.

There’s even a game of “hot potato” that involves a chase through a mansion, frantically passing off a prop, one character to another, managed in one sweeping, breathless take.

Way too much of “Game Night” is given away in the trailer, the violence is a bit much and truth be told — the folding in on itself plot gets in its own way, especially in the third act. But Bateman makes the big bucks for being the best put-upon “hero” in comedy.

And McAdams, doing an epic Amanda Plummer (“Pulp You Know What,” remember?) absolutely steals the picture. At gunpoint.

MPAA Rating: R for language, sexual references and some violence