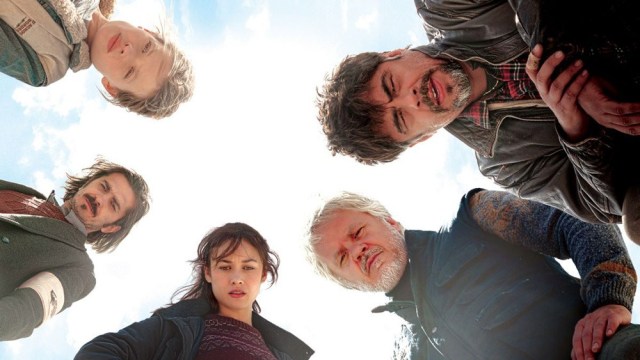 Movies in the streaming era have to meet one very basic requirement for a film buff. Are they worth sitting through, start to finish?

All this choice among services, all those titles on inventory. Why waste more than 15 minutes on anything that doesn’t grab you?

“A Perfect Day,” a flawed, even faintly-sexist tale of aid workers in the Balkan war zone, passes that threshold. It’s got a fascinating setting, a tunnel vision story — trying to get a body out of a rural well so that the water won’t be poisoned. A good cast, a retro-hipster soundtrack (Velvet Underground, Buzzcocks, Marlene Dietrich) and striking scenery.

No, they didn’t actually drag Benicio del Toro, Tim Robbins, Olga Kurylenko and Melanie Thierry into the open-sore of Bosnia, Serbia and associated war-turn states. The south of Spain was exotic enough.

Oscar winner del Toro is Mambru, a veteran fixer for Aid Across Borders. He’s not a bureaucrat, a fund-raiser or motivational speaker. He’s a roll up his sleeves and get a dirty job done guy. And he is in need of a rope strong enough to lift a bloated corpse out of a well.

Thierry (“Babylon A.D.”) is Sophie, an idealistic water quality expert new to all this war zone “respect protocol” stuff. Dealing with war-weary and combat zone-wise locals, superstitions and age-old feuds, competing agendas with predatory water capitalists is new to her. They have their orders. Wind this mission down.

“What about the fat guy?”

Tim Robbins is B, another old hand at NGO work in war zones. He’s a little gonzo, something of a hippy who keeps his own hand written notebook of survival tips — which side of the road mines are typically planted by the militias that drag dead cows to block the road and kill anybody who tries to get around it.

“Intuitive, maybe. But not crazy.”

Damir (Fedja Stukan) is their translator in this land known for “its yogurt and its sense of humor.”

And Katya (Olga Kurylenko) is the assessment officer assigned to see if their work here, negotiating with UN Peacekeepers and murderous local checkpoints, grinding out a day of tracking down a rope from suspicious Bosnians of this side or that one, wondering what version of the truth about why they need it will score them something too many people want to use for hangings, flagpoles and restraining scary war-refugee dogs.

They pick up a little kid who tips them off to a rope in the pidgen English of all war zone kids in the movies.

“Rope ees there. Dog is your problem. Not Nikola’s. Nikola is leetle boy.”

The picture settles into its long, frustrating metaphor for getting ANYthing done in a place where the enmity stretches back hundreds of years. But the script cannot let that happen without a heaping helping of melodrama.

Katya and Mambru have history — sexual history. And Sophie? She completes the cliche, freaking out as an aid worker in a WAR ZONE. Where there are corpses everywhere.

“It’s an important memory, your first corpse,” B cracks.

So we have two women, insisting that reality conform to their sense of justice, right and compassion, and two grizzled old Oscar winners shaking their heads and trying to keep them all alive until they muster out.

Co-writer/director Fernando Leon de Aronoa doesn’t make much of the movie’s opportunities for suspense. This is closer in tone to Richard Gere’s “The Hunting Party” than “Welcome to Sarajevo.” We get a sense of the stakes, the grim thankless nature of the work, chuckle here and there at the oddballs drawn to this Quixotic cause.

It’s never less than watchable, but I can’t say it’s particularly memorable (save for that soundtrack). Perfectly Netfixable adventure in a minor key.

MPAA Rating: R for language including some sexual references