Movie Review: “Fed Up” reminds us that “It’s the sugar, stupid.” 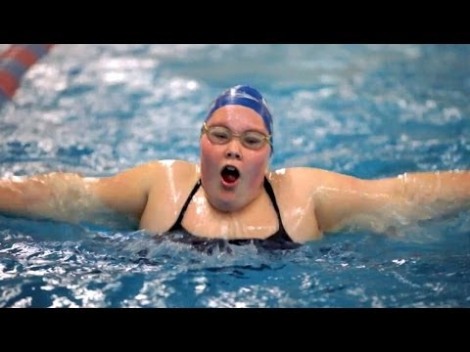 Joe, the 400 pound Latino boy from Houston, weeps in fear and frustration. He’s not alone. Maggie, a 212 pound 12 year-old from Oklahoma, joins him. Wesley, an overweight 13 year-old in Houston, is desperate.

But Brandon, 15, a 215 pound South Carolinian headed toward diabetes, morbid obesity and being a member of “the first American generation to not live as long as their parents,” is documenting his on video life, reading up on his diet and the causes of his problem, determined to “not be just another fat kid.”

Those are the faces of “Fed Up,” the Katie Couric-backed documentary about America’s spreading childhood obesity epidemic. It’s a frank, dismaying and yet surprisingly upbeat look at a problem the country’s been wrestling with for decades.

The problem, as narrator Couric and the many experts she and director Stephanie Soechtig talk to put it, is that we’ve been looking at the causes all wrong. That business about exercise vs. “sloth” and “lack of willpower” and “sedentary lifestyles” and “poor choices” either is misleading, or is avoiding the bigger issue.

“It’s your fault,” our way of stigmatizing the victims of this epidemic, “is not accurate,” they say. Exercise isn’t enough to compensate for the diet we’re being offered. The caloric math doesn’t work.

In 90 minutes, Couric & Co. trace the first time the problem was recognized- the 1977 McGovern Report from the United States Senate Select Committee on Nutrition and Human Needs — to the years of efforts to reign in advertising, force food processors to produce more accurate content labels, or to simply get them to cut back on sugar. Those efforts, Couric’s retinue of a couple of dozen experts agree, have failed — thwarted, again and again, by Big Sugar, Big Corn, by Big Pizza, by multinational frozen food concerns.

Michael Bloomberg, demonized as New York mayor for promoting the “Nanny State” by pushing restrictions on sugar soft drinks, diagrams the battlefield. Michael Pollan, the food expert made famous by “Food, Inc.,” laments the powers of lobbies that can buy Congresspeople on both sides of the aisle. Bill Clinton, a Surgeon General and a USDA head, as well as academics and professionals from nonprofits tackling this issue lament the business influence that has co-opted even First Lady Michelle Obama’s innocuous “Let’s Move!” efforts to address this head on.

And kids struggle to understand why this is happening to them and what is within their power that allows them to do something about it.

Mrs. Obama is among those who declined to be interviewed for the film, putting her in the company of Big Cheese, Big Sucrose and their lobbyists as those who avoid talking about the politics of this national disaster. The real villains, captured in Congressional testimony footage and corporate propaganda, are the profit-obsessed titans of food business and their lobbyist lackeys. They provide many of the ironic laughs of “Fed Up,” saying Ronald McDonald isn’t “marketing to kids.” Fox News isn’t the only media enterprise to push the phrase “nanny state” out there. But, as the film makes plain, protect-big-business-from-criticism conservatives made it a rallying cry, perhaps with less than pure motives.

The ripple effects of unfettered processed food capitalism are felt as we see the impact of Ronald Reagan’s slashing of school lunch programs, which led to schools selling their stoves, mixers and the like and laying off real cooks. Next thing you know, processed food and fast food conglomerates are in the schools, offering cheap, unhealthy alternatives to take the place of cooked, healthier meals. Coke and Pepsi vie for exclusive deals with cash-starved school systems.

The film is less pointed in focusing on the obese parents whose lifestyles help create obese kids. It’s a little annoying that all the plump children here are from the South — South Carolina, Oklahoma, Texas. Are there no fat Minnesota teens, no obese New Yorkers?

What makes “Fed Up” a tolerable harangue is both the humor injected into it, and the hope it draws from the Battle against Big Tobacco analogy. In a simpler time, that seemed like a fight no one could win. Then tobacco companies were demonized, their CEOs depicted as heartless villains, their advertising restricted and teen smoking plummeted. Maybe it’s time, the “Fed Up” experts say, to demonize Coca-Cola, Big Sugar, KFC, Kraft and the whole alphabet soup of food conglomerates that created this deadly epidemic. This movie, not a watered-down/advertiser supported TV news feature, could be a second step.

The first one, Pollan reminds us, as he did over and over again in “Food, Inc.,” is to eat “REAL food.”