Netflixable? Kerry Washington wants to know where her “American Son” is 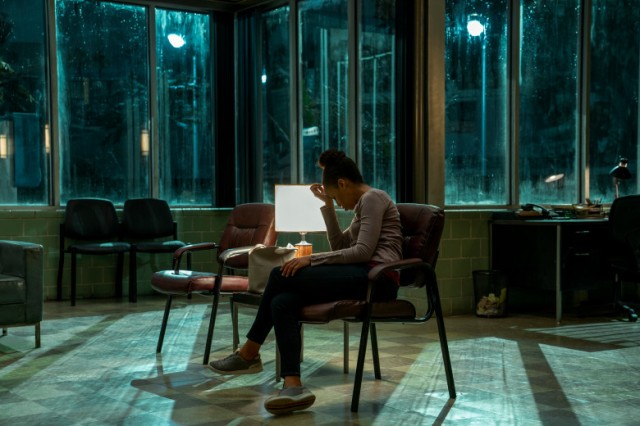 And here we thought Netflix was just “disrupting” TV and film distribution!

They’re going after The Theatre, too. Or they might as well be, taking on a preachy, stagey, acting (and over-acting) showcase like “American Son.”

It’s a tale told on a single set, just actors and lines –some shouted, some pleading, some weeping. It looks and sounds like a play.  Close your eyes, and it’s a radio play.

Not that it isn’t worthwhile. “American Son” is about gender, race, class, black lives matter and America, 2019. You can see why Kerry Washington got on board and got behind it.

But any movie you can enjoy with your eyes closed has a problem. Any conflict you can map out on graph paper, footnote with lines and words you expect to hear, isn’t going to surprise anybody.

The “Scandal” star plays Kendra, a Miami mom at a small precinct that looks like a mid-century modern living room. She’s desperate to find her teenage son. And she’s getting nowhere with this “low level newby (Jeremy Jordan) who ain’t very bright” in a uniform.

It’s all she can do to add “Officer, all due respect” to her increasingly agitated pleas and demands. His questions? By the book, maybe. But they’re triggering her. She may look and sound like Kerry Washington, put-together, educated and upper middle class. She corrects his (and everybody else’s) grammar.

But “any priors” and “street names” queries and the like certainly sound racist when you’re talking about a six foot tall eighteen year-old black kid in the Lexus his daddy bought him for graduation.

“He’s never so much as torn the tag off a new mattress!” is sarcasm lost on the cop.

She’s been leaving Jamal voice mails, alternately furious and pleading. She’s barking at the kid’s dad to meet her at the station. She can’t understand why, if the police know his car was pulled over, why there’s nobody who can tell her what happened, where he is and what is going on.

It’s a showy role, as Kendra rattles off Jamal’s description, starting with “glasses, corn-rows and light-green eyes” and breathlessly adds “loves Emily Dickinson” and “cries at ‘Puff, the Magic Dragon.'”

We hang on every word, because this is the quietest, emptiest Miami police station that ever was.

That doesn’t change when her husband shows up. But Scott (Steven Pasquale of TV’s “Rescue Me”) gets answers, just by being a man. And being white. Damned if the baby cop doesn’t let slip a “keep the natives at bay” and “She went from zero to ‘ghetto’ in…” in front of him.

Yeah. That’ll go in his file. Or not.

Scott ratchets up the tension, and still nobody can tell them exactly what’s going on. 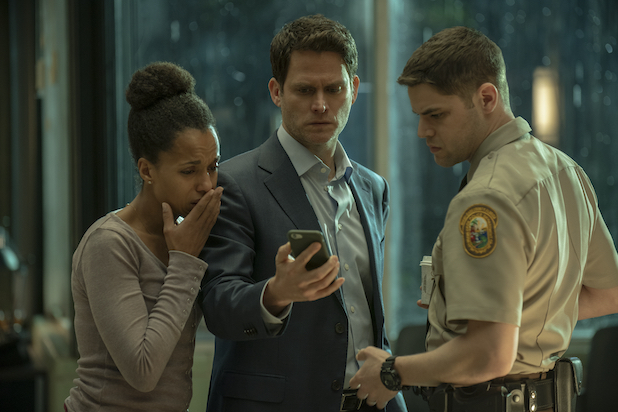 “American Son” never for a second feels like anything but a filmed play, despite the intimacy of the camera and blocking that takes us on the “stage” with the cast.

The script is a dramatic crucible for the couple talking through their bi-racial marriage, her Liberty City upbringing and the kid’s increasingly rebellious — stereotypically so — behavior.

Dad’s all about the “loose pants and that loping, surly walk he’s suddenly developed,” Mom’s defensive about the prep school they sent him two — with virtually no African American peers in it — and the bumper sticker he’s put on the car Dad, who moved out two months ago, bought him.

You know “uppity” is coming, that any request for coffee will be a loaded “I like it black,” and that the Irish cop will have a colorful expletive just for his wife’s increasingly shrill pleas and grievances.

As with a play, we’re meant to imagine much of what’s taking place off stage, with a lone close-up flashback filling in Kendra’s state. As with a play, characters take unnatural lengths of time off-stage — getting coffee, digging up more info — while those left behind have their little arguments, their big arguments and long verbal walks down memory lane.

Like a play, it’s a little claustrophobic, limited, “theatrical.” Washington, in particular, goes over-the-top — as if she’s “playing to the back row.”

But that’s what you get when you choose material that doesn’t feature movement and alternate settings and when you hire Broadway vet Kenny Leon, whose recent specialty has been TV productions of plays (“Hairspray: Live,” “The Wiz: Live!”) to direct it.

“American Son” never quite lapses into terrible, but as with a play that needs another week of out of town tryouts, it “never gets on its feet,” either.