Posted on November 22, 2019 by rogerinorlando 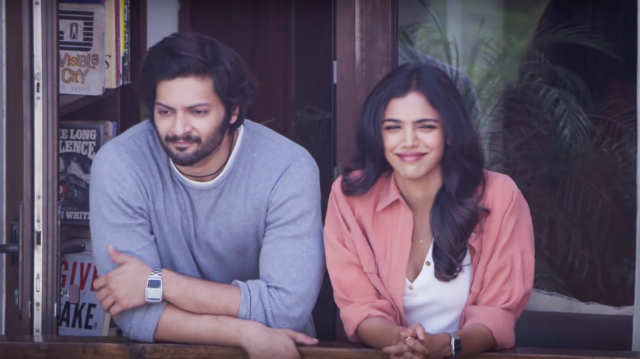 “House Arrest” is a 22 minute sitcom pilot lost inside a 104 minute romantic comedy.

It’s got a cute couple with chemistry, a couple of wacky supporting characters, a daft dilemma and a couple of funny pratfalls. That’s not even close enough to sustain a rom-com of this length.

The premise — Karan (Ali Fazal of “Victoria & Abdul”) is holed up in his roomy New Dehli condo, and has been for 279 days. He cleans obsessively, keeps a car that he has a hired man come and wash, run the engine, etc., and absolutely refuses to cross the threshhold of his flat. Even when a delivery lady drops an eggplant that’s barely out of his reach.

He’s got a few friends who stay in touch — the womanizer J.D. (Jim Sarbh) phones him from whatever bed he’s waking up in, whatever toilet he happens to find himself needing, and the irrepressible Pinky (Barkha Singh), the daughter of a “don” (a mobster) who never hesitates to drop in and impose herself on hapless Karan.

He has his plants, his Roomba, his cleaning rituals and a daily parade of delivery folk (most of whom simply get his address wrong). Pinky? She’s always ready to offer sex for a favor, even if it means having her Lurch-sized body guard Rambo (Sunil Kumar) turn his back while she makes her move.

Not interested, Karan insists. But the favor she needs is an offer he can’t refuse. Because she won’t allow it. He needs to keep “this package” she’s having delivered. Just for a bit.

Figuring out that she’s stuffed a bubble-wrapped body in the trunk dropped at his door comes later.

J.D. professes concern for the shut-in (nobody calls him “Agoraphobic”). Karan is on the spectrum, some sort of spectrum, anyway. One picture is tilted, that means he’s tilting every picture on his wall. But there’s this reporter J.D. wants Karan to meet.

Saira (Shriya Pilgaonkar) is working on a story about the Japanese fad, “hikikormori,” young men locking themselves in their homes with only social media, electronics and food deliveries for company. Is this catching on in India? Karan could be a test case. 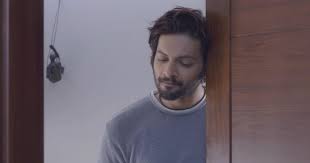 The comedy here comes from the bubble wrapped body, mostly. And Pinky. And to a lesser degree, Rambo and J.D. When the body “wakes up” there’s an amusing wrestling match to contain him, and a ditzy phone call to Pinky who tries to talk Karan through finishing the job on the phone. “Stick the knife just below the shoulder blades…or maybe slitting the throat (in a blend of Hindi — with subtitles — and English) would be easier!”

The romance comes from this pushy, pretty reporter and talks Karan into saying “I just needed a break” from his life as a banker, with its “responsibilities, promotions, ambitions.” She’s not convinced. Neither are we.

A day long visit to his immaculate, well-appointed and roomy home convinces her that “You’re loaded. You have it all! You can do anything you want!”

Anything except go outside. And he might have to do that if he wants to “get the girl,” in rom-com speak.

The film is meant to feel claustrophobic, with the limited settings — interiors that comprise Karan’s world. The colors, the light and the balconies undercut that design goal.

A clever sitcom effect — everybody Karan talks to on the phone materializes in the room with him — J.D. on the toilet, Pinky getting her hair done, Saira riding in an “auto” (three wheeled motorized rickshaw).

If you ignore my warnings and dive into this, I will give screenwriter and co-director Samit Bansu this credit. There’s a very sweet twist or two, right at the end. It’s the bulk of what comes before that finale that handcuff “House Arrest.”