What do the limp holiday romance “Last Christmas” and the potentially romantic thriller “The Good Liar” have in common?

Both films are built on revelations that aren’t the “BIG REVEALS” the filmmakers were hoping for. And both hinge on relationships that have the frosted feel of unreality to them.

At least “Liar,” based on the Nicholas Searle novel, serves up the pleasures of two of Britain’s finest co-starring and carrying a movie at the stage of their careers when supporting roles make up the bulk of their work. They give us flashes of gusto, here and there, as this Bill Condon (“Kinsey,” “Dreamgirls”) film skips towards a third act in which the whole of what came before is pretty much undone.

Ian McKellen has the title role, and the early moments — beginning under the credits — show him and Helen Mirren as two lonely, seemingly well-off seniors (OAPs, “old age pensioners” as they say in the UK) making a love connection via “Distinctive Dating,” a matchmaking website.

It’s 2009, we are told, and each click their checkboxes — “Non smoker,” “Don’t drink” — we see him taking another drag off his cigarette and her sipping a pinot grigio. Yes, we all fib on such websites.

“Brian” and “Estelle” meet for dinner, with diplomatic pleasantries (she’s knocking back a martini) and — in short order — tiny confessions. He holds honesty as of paramount import, and there’s been “a deception on my part.” His real name is Roy.

Not to worry. Dating websites invite white lies. Her real name is Betty. Can’t let that stand in the way of romance, can we?

But as we follow Roy, we see the fake name is merely the tip of the iceberg. He’s got this big business deal with “Russians seeking to join the English Investor class.” Something to do with a fast overseas real estate flip. There are backers who’ve been invited to participate. Roy and partner Vincent (Jim Carter of “Downton Abbey”) lay it all out.

We don’t have to be told this is “dodgy” to know this is dodgy. And as you look at all of those assembled for this bank transfer business, the moviegoers’ mind weighs just one question.

That, unfortunately, spills too easily over to the romantic side of the story. Roy gallops down the street, only to affect a limp when he staggers into his dinners and other meetings with Betty. He finds himself invited to stay over, regards her suburban tract house with disdain every time her back is turned, even as he, to all intents and purposes, abruptly moves in.

It’s not just her scholar grandson (Russell Tovey) who is instantly suspicious. Because for all Roy’s twinkling, there’s something about Betty’s haste in inviting him to stay, the passive nature of the character, her willingness to hear any proposal, that instantly alters the dynamic to the viewer.

You can’t help but wonder, again, “Who is the mark and who the hustler?” 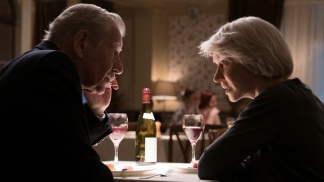 The performances and the stakes involved keep us engaged as we’re shown the depths of Roy’s deception and just how ruthless he can be. McKellen has always made a great villain, and this fellow is one of his most interesting — dapper, charming, cunning and quick on his feet when “the game” is afoot.

Mirren’s role is so underwritten and underplayed early on that we can’t help but leap ahead in guessing why she’s top billed. She has her scenes and some delicious moments. Later.

Then the third act arrives, and the flashbacks — long narrated anecdotes — take over. They revisit the distant past, serve up differing versions of that past and how it relates to who and what Roy is today, and just how shocked Betty will be at the admissions.

There’s one clever bit of business in all that. But for the most part, the picture’s believability falls to pieces here. The hustles stopped being cute earlier, and the denouement pummels the picture into something grimmer.

And “The Good Liar” lapses into being “The Poor” one in a movie that’s become both more far-fetched and utterly conventional.

MPAA Rating: R for some strong violence, and for language and brief nudity

Credits: Directed by Bill Condon. script by  Jeffrey Hatcher, based on the Nicholas Searle novel. A Warner Brothers/New Line release.