Documentary Review: Ten Years After high school, who remains “Most Likely to Succeed?”

Posted on November 13, 2019 by rogerinorlando

“Most Likely to Succeed” is an ambitious, smart and affecting documentary that follows four disparate high school over-achievers, kids who collected that title in their respective alma maters, to see how life worked out for them in the decade after graduation.

It may be smaller in scale and scope than the gold standard for such films, Michael Apted’s classic “7-Up,” (and “28-Up,” etc.) series of British films. But Pamela Littky’s four subjects, followed for ten years, give us a healthy dose of white privilege and a taste of the struggle that people who don’t start out on second or third base in life face on the “road to success.”

And what’s striking about this quartet — blonde Sarah, the Florida preacher’s kid, Quidrela (“Quay”) and Charles (“Disco”), both black teens from Detroit, and California boy Peter, the son of two college professors — is how much alike they are.

The arc of the film shows them to be go-getters, piling up awards, club responsibilities, good grades and ambitions at 18. And no matter what false starts or pitfalls life gives them, that shared character trait was still obvious a decade later.

Littky, an on-point off-camera questioner, can’t quite avoid stereotypes, even in her selection of subjects. Two black kids from Detroit — one raised by a single mom, the other abandoned by drug addled parents? That seems too on-the-nose. But they’ve already made up their minds to rise above their childhoods, be the first in either family to go to college.

With her vocal fry, and the vast wardrobe that she moves into the Gainesville dorm, Sarah could easily be set up as “the villain” of the piece, the one who gets on your nerves, with so much of what she achieves seemingly arriving on a selection of silver platters.

But there was work going on as she carved out FIVE semesters abroad during her University of Florida career, a Fullbright Scholarship, a fluency in Hebrew, Turkish and Arabic. Yeah, she wanted to be in the foreign service, maybe Secretary of State someday. At 18. Her focus in not straying far from that course is impressive.

Her love life? “I’m not the kind of girl who will follow a man” says it all.

Quay has some vague notions about “travel” and not wanting “a regular job” at 18. She changes colleges before she even starts school, and starts to work out what she can do with her interests in children and healthcare.

Peter? A musician who is self-aware enough to realize he’s not self-aware, a tad “on the spectrum” perhaps, he starts Ivy League Brown University wishing “I felt emotions more strongly” and “realizing my own ignorance about other people.” He studies Chinese, talks of teaching and ends up exactly where very smart white guys with Ivy League degrees who aren’t the most sensitive to human emotions go.

Charles, abandoned by his parents, only wants to get married someday, maybe become a physical therapist or athletic trainer. 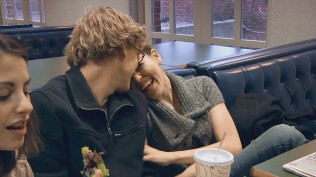 “Life happens” to them over the next decade — a marriage, a first, second and third romance, travel and graduation, first jobs and first careers changing into second or third jobs and different careers. Grad school, a pet chihuahua, funerals.

Who will figure out that white privilege means “opportunities (were) almost handed to me,” who will see a dream deferred and who will want to “Pay if forward?”

I like Littky’s mix of elements used to tell these stories, catching up with some via cell phone video they shoot themselves, social media updates (re-created, typed out on screen). Her questions, heard here and there, elicit great responses.

“I hear you’ve got a boyfriend” to one. “You guys are SERIOUS” to another.

Her film reinforces the thesis of Apted’s British TV films, which tested Aristotle’s theory that “Give me a child until he is 7 and I will show you the man.” These young people were already formed when Littky settled on them as subjects. They might fall into college partying a little too hard, divorce, quit jobs and lose their way here and there.

But they cannot escape the grounded, adaptive and achieving or overchieving kids they were at 18. That can be taken as heartening, because it suggests at least some color-blindness, at least a window they’ve all already half-crawled through at 18, no matter what circumstances stood in their way or gave them a head start before then.