Documentary Review — “Scandalous: The Untold Story of the National Enquirer” 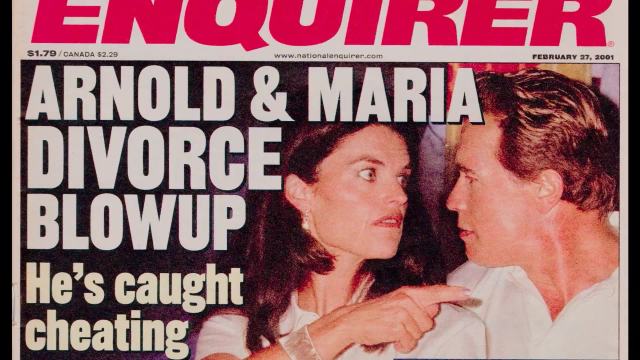 “Scandalous” is a documentary that tracks the history of American tabloid journalism’s most infamous scandal sheet, from its origins to its Elvis death photo/Gary Hart with Donna Rice on his lap heydays, to the ways it help put a tabloid figure  — Donald Trump — in the White House.

Mark Landsman’s film charts the steady progress, with short bursts forward, of the “tabloidization” of journalism which Lantana, Florida’s National Enquirer heralded, and often willed into being.

Using archival footage from an ancient “60 Minutes” story, a “Nightline” profile and the like, fresh interviews with many of its most famous employees and sage pronouncements from mainstream journalism critics to provide context, it’s a thorough telling of “The Untold Story of the National Enquirer,” and an often entertaining and chilling one.

“Scandalous” is a journalism expose that lives up, or down, to its hype.

As Mike Wallace pointed out way back when, it was mob money that allowed Generoso Pope Jr., son of a “made man,” to buy the failing New York Enquirer in the 1950s, and by focusing on crimes and gory accident photos, turn it into a national publication.

He and his staff tinkered with the formula that would make it sell — stories of celebrities, pets, psychics, of Jackie O. and UFOs. And by the late 1960s it was the most widely read weekly in America.

She couldn’t get enough of Elvis, of Jackie Onassis, of Farrah Fawcett and Liz in a “newspaper” that was their escape from the real world of Vietnam, Watergate, inflation and the 1970s Arab Oil Embargo.

Seeing Wallace interviewing elderly white women who had picked The Enquirer up at the checkout counter at their supermarket — Pope’s stroke of marketing genius — and hearing them cluck, “They couldn’t print it if it wasn’t true,” you understand how Nigerian princes and TV preachers get rich, and how Donald Trump is president.

Landsman (he did “Thunder Soul”) gets retired staffers to tell the tales of unlimited expense accounts, “checkbook journalism,” where they paid sources to rat out their famous employers or relatives for stories. The lengths The Enquirer went to in order to obtain that famous shot of Elvis in his coffin is a hilarious, and a trifle appalling. 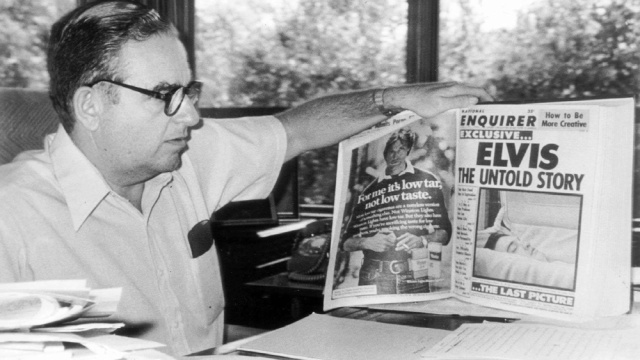 Pope kept his publication somewhat apolitical (he was described as a “conservative Democrat”). But it was under his stewardship that blackmailing celebrities became a common practice, that killing stories on Bob Hope’s lifelong womanizing and Bill Cosby’s sexual appetites led to puff piece “exclusives” that built the magazine’s “legitimacy.”

The die was cast under Pope. And after his death, other publisher/owners took that practice and created the “catch and kill” technique — buying “exclusive rights” to somewhat with Arnold Schwarzenegger’s secrets at her command, or Donald Trump’s, so that their stories couldn’t be told elsewhere.

The result? One lecherous groper became governor of California, another groper/assaulter and womanizer became president of the United States, both with the help of “a short man wanting to be tall,” then publisher and GOP booster David Pecker.

The veterans of the publication, for all the derision they took over the years — many of them ruthless, ethically-challenged Brits, veterans of Fleet Street tabloids in the UK — for all of their own shortcuts, invasions of privacy (wiretaps, stalking, mail-theft), profess shock at seeing this tactic.

Burying a good story? That’s blasphemy to an authentic hack. But once you’ve covered for Bob Hope and Bill Cosby, once you’ve started down the slippery slope of corruption, the only real wonder is why it took them so long to seize the reins of power.

As Watergate legend Carl Bernstein notes, we’re in “a bad time for the truth.” And once you’ve seen Jackie Kennedy Onassis push a supposedly long-dead John F. Kennedy around in a wheelchair on some Greek Island, in an Enquirer photo I recall seeing in an issue I perused at a neighbor’s house in the ’70s, once you’ve seen aliens checking the landing gear of their saucer, once you’ve heard famed journalist Ken Auletta decry the ethos that “facts were not important,” how we got here is no longer the question.