Netflixable? Thora Birch and Chris Klein are in it for “The Competition”

Posted on September 20, 2019 by rogerinorlando

But “The Competition,” a rom-com that pairs them up, has a hint of that era about it, even if it is an emphatic reminder that “You can’t go home again.”

The quirky cute Birch and earnestly hunkish Klein still have their signature “look” about them. But this wan, chemistry-and-laugh-starved comedy suggests reasons they might not have smoothly transitioned to adult roles, even if they were offered better ones.

It’s a tepid tale of a scientist who crunches “formulas” for everything from “the perfect pizza” to the statistically doomed relationship. Lauren (Birch) has a successful blog — “The PIG Theory” — that might become a book about her “Point of Infidelity and Guilt” theorem.

Calvin (Klein, ahem) is a Portland attorney who specializes in women’s rights, female advocacy and women in divorce court, “undefeated” in the field, his firm reminds him.

But he abandons what we take to be his “integrity and honor” and assumed innate feminism to take up a partner’s  task. Gena (Claire Coffee) wants him to meet her, court her and get her to abandon the blog and the book deal over some vague concern that “the sister I grew up with” is about to disappear forever.

Right. She’s down the rabbit hole of cynicism. Can he rescue her?

Lauren’s establishing scene, the ONLY funny moment in “The Competition,” has her skydiving with a then-beau, assuring him that he’ll “love” this, that she is “certified,” which is why she gets to jump AFTER he exits the plane.

Yes, she’s breaking up with him. “It’s not you, it’s me” is shouted over the noise of the Cessna. After he’s gone, she assures the pilot, “I LIKED that one.” She’s done this before, which is why she had the foresight to bring a thermos of martinis to sip on the flight back to the airport.

Cute. Funny. Everything the movie that follows is not.

Cal forces a “meet cute” on her, charms Lauren and in a whirlwind (and super-short) montage, is about to get to the sleepover (after a week) when he “confesses.” Only nnot really. He tells her just enough to set up a contest.

He’ll pick five couples he knows, mostly guys from his poker “afternoons,” not “nights. A new mom at his office (Kelsey Tucker, also screenwriter of the film) is added to give the game a little gender equality.

Lauren will sic her bombshell “dancer” (stripper, played by ex-Playmate Tiffany Fallon) and other temptations at the experiment’s subjects. And we’ll soon see if her “six months” dating limit is all most people can handle “theory” is valid. 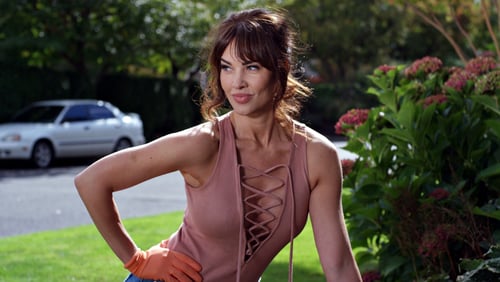 Yes, the “wager” is absurd. She’ll give up the blog, book, etc. He’ll give up, what, his bachelorhood?

No, the “subjects” aren’t interesting. At all.

Yes, the Lauren-Calvin relationship is tested, the ante is upped. The most dispiriting bachelor party in screen history ensues.

Klein is a sturdy, ruggedly handsome leading man more cut out for “the guy she leaves behind” in romantic comedies. He’s never funny. Not even in “American Pie” was he the source of humor, strictly an earnest “straight man” to all the pastry defiling going on.

Birch has a little more on the ball, but her lot, too, seems destined for perpetual second bananahood, “the best friend,” the “odd girl/woman out at the bachelorette party.” Her big shortcoming here is an inability to create funny sparks on her own with deadweight Chris.

The supporting cast might have sparkled had their been more amusing things for them to say and do. The plot was never going to manage a surprise, because Hell’s Bells, this is the narrative of every Matthew McConaughy/Kate Hudson comedy ever. Almost.

For those reasons, and more, “The Competition” is lost in losing.