Movie Review: Coping with the worst, with comedy, for “3 Days with Dad”

The comedy “3 Days with Dad” is a dark farce about a family gathering to say goodbye to their patriarch as he faces the end of life on tubes and life support in a hospital.

It’s a dismissable, hit or miss affair intended as a star vehicle for career supporting player Larry Clarke, who wrote and directed it.

But here’s why we stick around to the finish, kids. This one concludes with a flourish, some genuinely amusing moments and a couple of heart-stopping ones, both from unexpected places.

The third act makes the movie.

The Mills of Maryland gather for the funeral of brusque, racist hard-drinking ex-military husband and dad Abner (Brian Dennehy). His widow (Lesley Anne Warren) is barely keeping it together, but steady, weepy and devoted Catholic son (like his father) Andy (Tom Arnold) is prepared to give the man a eulogy he deserves.

Only Dad’s wish was that the more disappointing son, Eddie (Clarke), a hotel doorman in Chicago, single, 40something and as we’ve heard on phone conversations in the opening, not flush enough to be able to buy his own plane ticket to get there, be the one to honor him before his funeral mass.

Eddie breaks Catholic decorum and “wings it” through his speech, and we can’t figure why on Earth the Prodigal Son would be the one picked for this hefty responsibility. The movie, in flashbacks to the more distant past and the last few days, and in the stumbling sibling-and-stepmom debates about how to proceed AFTER the funeral, sets out to show us why.

There are funny lines, here and there — and funny supporting players.

J.K. Simmons plays a stereotypical goombah funeral home employee in training, blunt and profane, but with a compassion that makes him born for the job.

Eddie runs into high school crushes in a bar (Amy Landecker) and in the hospital (Julie Ann Emory), and a brutally outspoken classmate who wound up quadriplegic (Mike O’Malley). Everybody wants to know why they’ve checked his father into “the Death Hospital, the Roach Motel — ‘They check in, but they don’t check out!'”

And they have to hear what Eddie’s been up to. 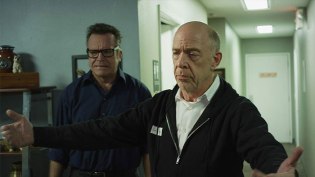 At some point, though, the comedy is joined by an unblinking look at dying in America today — the succession of tests and “teams” an increasingly enfeebled man must face in his terminal days. “Swallow tests” and “lung clearing” and the myriad of conditions, from diabetic kidney failure to “end of life emphysema,” the “bed team” that has to come in and evaluate bed sores and decide on a course of action.

Never dealt with any of this, with helping an infirm, aged parent to a hospital bathroom, struggled to allow them cling to a little dignity in the face of an inhuman machine bent on prolonging life at the very end? You will.

Some of the jokes land — “So, last rites again? Third time’s the charm, Father?” Some don’t.

But the reality of it all almost never fails to connect, and some of that is amusing.

Dennehy has made a career out of barely-lovable and gruff, and his bluff turn anchors the picture. Warren’s stepmother figure is a fascinating study in distraction. She’s fretting over how much more she “can take,” doting on her husband but already moving on in her mind, hunting for distractions — routines that move her out of this vortex of death and dying.

And veteran funnyman David Koechner breaks free of “type” as an end-of-life doctor who is all soft-spoken tenderness, with the occasional euphemism, dealing with a distraught family at the bedside of the dying man.

It’s those human touches that make “3 Days with Dad” endurable. And if they don’t quite save it (the difference between character actors and leading actors is not skill, but charisma), they at least give it purpose, with the occasional break for levity.

Credits: Written and directed by Larry Clarke. A Unified releease.