Laurence Fishburne is a prison warden haunted by the past, forced to deal with flashbacks to his past sins as his infamous place of work is about to be imploded in “Imprisoned,” a tale set and filmed in Puerto Rico.

It’s a ponderous melodrama of love, loss, revenge and mass injustice, a wholly fictional tale about an abusive system whose abuses extend to the gallows, which that warden once eagerly employed in a mad rush to empty his death row before changing political tides ban the death penalty there.

As it’s not a period piece and Puerto Rico actually abolished the death penalty (not for Federal crimes) in 1929, it lives or dies in the performances and the grim scenario writer-director Paul Kampf (“Brothers Three: An American Gothic” and “From Grace”) cooks up.

Both come up short.

We meet the warden in retirement, bald and pot-belled, living in a dumpy trailer, but moved to visit his former place of employment (the exteriors are the Castillos San Moro and San Cristobal in San Juan) on the eve of its destruction.

Wandering the wired-to-explode walls, he flashes back to a woman (Juana Acosta) and something she said long ago.

“What you did inside that place will be with your forever…forever.”

He met Maria when she opened a cafe, El Faro, (“The Lighthouse”) near the prison, an anti-death penalty activist who lectures the stranger on “second chances” and how “that should be on your mind every day.”

Her husband, Dylan (Juan Pablo Raba of “The 33” and “Shot Caller”) got such a second chance. He’s an ex-con who hires other ex-cons to work on his fishing boat, aptly-named “Penetincia.” Maria is grateful he got that chance.

The warden? He eyes the pretty wife, asks her if he knows her husband, and bad things start happening to Maria and Dylan Burke. Those bad things are aimed at putting Dylan back behind bars, and Maria under the thumb of a warden who sees the world and convicted criminals in stark terms, and himself as a man charged to carry out “the directives of the people.”

Dylan? He’s turned his life around and we see him act as nothing but conciliatory. An ex-con has to be that way. No trouble with the law is allowed, even if the local chief (the late John Heard, in what may be his last film to reach the screen) is sympathetic.

What unfolds is the generic prison picture war of wills, with prison riots, torture, and Esai Morales as the governor who illustrates the claim that “the death penaltiy is just a publicity stunt by politicians.” 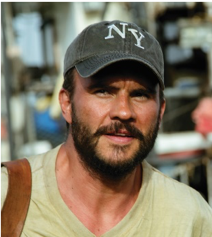 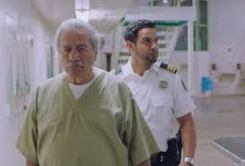 Edward James Olmos is the Old Man of the Yard, not the first nor the last cliche this cliche-ridden picture is saddled with.

Fishburne rarely gets roles this prominent these days, and there’s an attempt by him and the script to show Warden Calvin’s point of view, to somehow temper his cruelty and criminal abuses of the system with his own grievances. That’s a bit eye-rolling.

The dialogue, in English and Spanish with English subtitles, is  prison picture boilerplate.

“Keep telling yourself that, convict.”

The warden, or at least the writer-director, has fond memories of “Cool Hand Luke,” where lines about “getting your minds right” were born.

The ticking clock nature of the third act is as slow as the rest of the picture, and thus it becomes a clock that stops. The lack of urgency renders the performances dramatically flat.

I’d say there’s a better movie in this material, but there isn’t. A warden violently, murderously framing an inmate, blackmailing the inmate’s wife, and he wants us to understand his reasons? Fishburne tries to do something subtle with him, but his character’s actions speak louder than his “Les Miserables” brooding.

Everybody else is painted in monochromatic shades — the righteous, loving ex-con, the saintly but desperate wife, the grizzled con, the poll-watching politician.

Nothing much here grabs us and drags us into the next scene, much less the following acts. “Imprisoned” never escapes its lack of drive, never takes on the urgency this scenario promises.

They had interesting locations, a decent cast, probably government incentive money to aid the financing, just not a script that was ever going to amount to much, even if perfectly executed.