Posted on September 4, 2019 by rogerinorlando 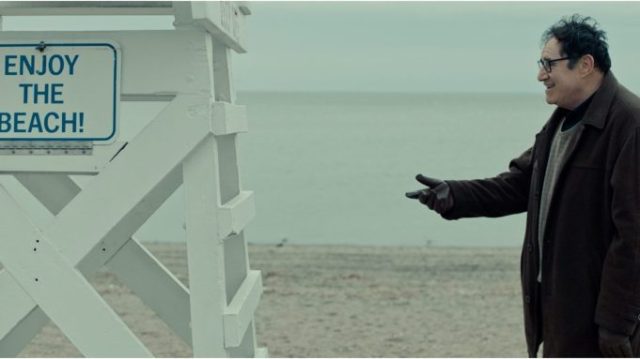 The Western world, much of it anyway, is growing lonelier by the plugged-in/logged-on day. But is technology destined to serve up virtual solutions to the real-world human disconnect it has created?

That’s fascinating fodder for science fiction, and we’ve already had a films about lonely men, younger and older, supplementing their shrinking world of companionship with digital “friends.”

So the deja vu you feel when watching “Auggie” is justified. Actor turned first-time feature-director Matt Kane’s film straddles the middle ground between “Robot & Frank” and “Her.”

Take away Scarlett Johansson’s voice and the romantic longing of “Her,” and let our retired, neglected and depressed “hero” (Richard Kind) see a beautiful young woman when he converses with the digital ether, and you’ve got “Auggie,” a retiree tumbling for a digital fantasy who only has eyes and ears for him.

Creepy? Yup. We can see it straight off. How long will it take Felix, if indeed he wants to figure that out?

We meet him on the day he’s put out to pasture, an architect eased out with a joyless going away party. Felix doesn’t even get a gold watch. He’s handed a pair of glasses, a “digital assistant” that only he can see and hear.

“Auggie, where seeing is believing” is the video commercial tagline. The glasses tap into your brain, “anticipate your needs” and the virtual person you chat with responds to them.

Or so he’s told. Felix isn’t interested. But as he putters around the lonely house, as his wife (Larisa Oleynik) carries on with her career — which contrary to America’s ageist present — offers her a promotion and new responsibilities in a media marketing business where she has a work crush on the boss, Felix puts those wonder glasses on.

Man, is he in for a shock. “She” (Christen Harper) looks to be 20ish, with that fetching blush of youth — doe-eyed, with those eyes riveted on his, her smile warm, genuine and alluring.

“I know everything about you, Felix…I’m just kidding.”

“There’s nothing creepy about it.”

His vague plans to open his own firm, consult, to narrow the widening gulf with his increasingly distant wife, to “find a reason to get up in the morning,” vanish.

He pops on the glasses, and he’s got stimulating conversation on subjects of interest to him — mainly himself.

And like any good digital company, the makers of Auggie have upgrades to upsell you. Three words tell you where this is going. 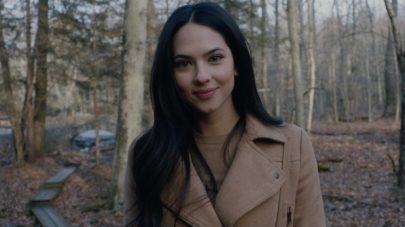 Harper’s winsome smile and eagerness to please come off as apt, but mainly she reminds us of what Johansson was able to get across with just her voice in “Her,” a real connection, longing, concern and troubling AI self-awareness.

For those of us most familiar with Kind’s lovable losers in scads of TV shows and films, it’s nice to see the shadings he’s able to give Felix, whose own self-awareness takes on “American Beauty” undertones.

There’s guilt and regret, longing and escape in this performance, and mainly in the performance, as there’s little else to this slight, faintly thought-provoking (but nothing more) drama. The supporting work is colorless, and the film itself has a bloodless chill much of the time.

That’s the chief shortcoming in “Auggie,” another sci-fi indie that reminds us you don’t have to break the bank showing us the tech and look of the future to get at interesting, current problems extrapolated into the digital great beyond in a movie.

Here, an image does that, one that bookends the film. A lonely old man in glasses, chattering into nothingness, on an empty beach in winter.

“Auggie” isn’t “Her,” but it’s short enough to hold our interest, even if it’s not engrossing enough to manage anything more.