Movie Review: Butler again to the rescue, needing rescue himself in “Angel has Fallen”

“On the nose” casting can be playful, or it can be a curse — a lazy form of screen shorthand that strips the mystery away from your thriller before the opening credits are finished.

So glancing at the names listed below, the ones that flash by in the opening moments of “Angel has Fallen,” you can probably guess from Danny Huston, Tim Blake Nelson and Nick Nolte, who might be the heavies and who might play the grizzled old mountain man who figure into the plot.

But that doesn’t ruin the movie. As Hitchcock always said, “Good villains make good thrillers” and Huston’s been working that side of the street for decades, now.

The third film in the Gerard Butler super-Secret Service Agent series is a movie of big BOOMS, ECUs (extreme close-ups) and a truckload of F-bombs. And if it takes its action beats, plot points and politics from “The Fugitive,” “Shooter,” “RED” and Q-Anon, well that’s just madness to go along with the over-the-top B-movie mayhem.

Butler’s Mike Banning bonds a bit with an old Army buddy (Huston) who now runs a mercenary operation — Salient. “Contractors” they call themselves. Old buddy Wade needs a little help landing government work, and Mike’s in line for the top job at the Secret Service.

Wade doesn’t think either of them is cut out for desk jobs, though — “We’re lions. And that ain’t never gonna change!”

Mike? He’s got a wife (Piper Perabo), a toddler at home and pills for every concussion, neck, back and muscle injury he’s taken defending America’s presidents. He may have President Trumbull’s ear, but maybe that step up is not for him.

And then the most gonzo assassination attempt in recent screen history puts Trumbull (Morgan Freeman) in a coma, Mike in the crosshairs of the investigation (Jada Pinkett Smith is the FBI agent on the case) for colluding with the Russians, and a trigger happy vice president ready to strike back at those implicated in everything from election interference to pee pee tapes, and now a hit on a sitting president.

Mike must escape custody, finger the real culprits, clear his name and save the Republic. Again.

Stunt-man turned director Ric Roman Waugh (“Snitch,” “Shot Caller”) tops the epic (and digitally-augmented) assassination attempt with a kidnapping “hit” out on Mike, and an absolutely stunning, close-up and explosively violent escape, edited into a whirling blur of bodies, blows and bullets to the head.

Waugh isn’t much on subtlety or finesse. And as I say the plot here is a pastiche of other “clear my name” thrillers. But the man knows his meat and potatoes action beats.

Mike’s getaway includes a visit to a mountain and an emotionally overwrought Vietnam vet (Nolte), and getting and getting out of there, stuff blows up.

And no, that’s not even close to the last stuff that blows up, here. 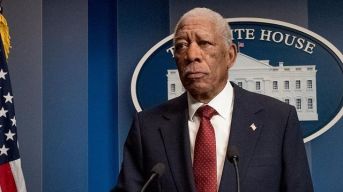 The old man blasts the younger one with an epic speech about war, and an apology — “Me disappearing was the best thing that ever happened to you.”

Freeman gets a speech or two as well.

Mainly, though, “Angel has Fallen” (Secret Service agent as “Guardian Angel”) is about the fights, chases, shootouts and explosions. And insane lapses in protocol and logic and loony coincidences.

And Waugh makes those work, finding the odd laugh (NRA loons get what’s coming to them) as he does.

Butler wears the weary man of war thing well, and his stunt crew is aces.

Just don’t take any of the rest of this seriously. The Russian stuff is straight out of Fox News/QAnon apologia. Nobody evers uses the word “traitor.”

And try to forget every supervillain, mountain man or sniveling schemer the names in those opening credits have played, if only for two hours.

MPAA Rating: R for violence and language throughout.