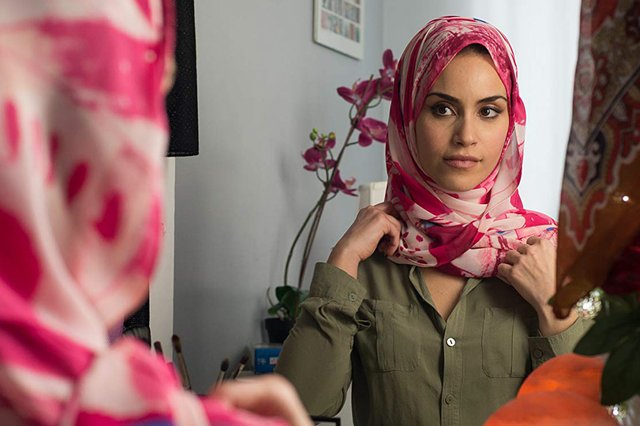 Her rebellion begins with curiosity, which is what brings her to Club Lulu. She makes the leap into full-fledged revolt in the restroom there.

Taking off her hijab, shaking out her long, flowing hair, Fatima tells us and the bathroom mirror “You’re going to BOTH your parents’ Hell for this!”

Some movies walk a fine line between comedy and drama, or between melodrama and farce. There is no “fine line” where “Becoming Burlesque” is concerned. It’s about a Toronto college student who discovers the liberation and empowerment in burlesque.

Did I mention she’s Muslim, niece of a local Imam?

Actress turned writer-director Jackie English has cooked up a laugh-out-loud Islamic East/Hedonistic West culture-clash comedy with an edgy, almost menacing undertone. It’s not subtle, but not as scary as you might expect either.

Fatima is an engineering student who “Googled” that name once. “It means ‘captivating,’ I think.”

That suits, as Fatima (Shiva Negar, in a career-launching turn) is a great beauty, something not obscured by her wearing of a traditional hijab.

OK, “traditional” is a stretch. Her scarves are pretty, something her Anglo-Canadian mother (Severn Thompson) scolds her about. As tolerant as Dad (Hrant Alianak) can be, Mom is unironic when she quotes her Imam brother-in-law, who already regards Fatima as a “half-breed.” For the love of Allah, let’s at least appear to be “devout.”

Dad is prone to heart-attacks. Let’s not give him one. Uncle Yousef (Sam Kalilieh, terrific) is the Iman, even more conservative, a man who sees himself as a bulwark against not just the temptations of the West that they’ve relocated to. Yousef is a strict but not strident uncle merely trying to illuminate his faith’s path in a city of “lost and confused people,” riding his extended family to stick to that path.

Maybe moving to Canada (from Syria) has softened the men. Yousef is patronizing, sexist, overbearing and insufferable. But he’s nobody’s idea of a wild-eyed nut.

He just, you know, insults Fatima’s white Christian-born Canadian mom right in front of her.

“Your wife might be the shame of the family, but she makes excellent lamb!”

Fatima is too young, smart and Canadian to put up with that. None of his “You’d be happier with a man to take care of you.”

She bolts from dinner and marches into rebellion. Earlier that day, Fatima silently intervened when a pushy, aggressive man attempted to put the moves on a voluptuous overly-made-up redhead at the bus stop.

That’s a near-perfect introductory scene, because after young Fatima has introduced herself to Texas Red Tempest (Courtney Deelen), the Muslim and the burlesque dancer have a brief, awkward conversation that sets the entire film up.

“Wouldn’t it be easier to dress, you know, a little more…” Fatima wants to know.

“Easy is no reason to do something,” the defiant redhead snaps back.

“And you’re a terrorist!”

The message? Don’t judge. Don’t stereotype. And never, ever call a burlesque dancer a “stripper.”

Fatima is just open-minded enough to find her way to Lulu’s, to meet choreographer and star attraction Catcha Foxx (Pastel Supernova). And she’s just rebellious enough to let herself get talked into things. Filling in as “kitten” for starters.

That’s the non-dancer in skimpy burlesque-wear who picks up the clothes, garters and gloves that the strippers — sorry, burlesque dancers — leave on stage. 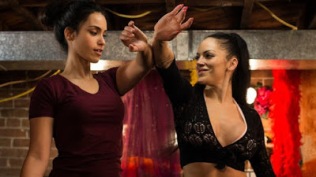 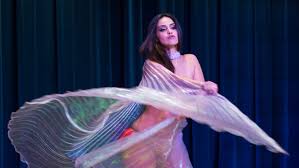 Writer-director English finds, if not a happy balance in which way the script’s cultural biases lean, at least a pleasant one. The movie, like most of the characters in it, errs on the side of tolerance.

“This is a new time and place,” Waleed, Fatima’s father counsels in his endless Koranic debates with his brother. “Evolve!”

We get a sense that Fatima’s fellow dancers get a thrill out of converting or at least corrupting her. Texas Red, in particular, seems to know the sexist patriarchy that women in the the Islamic world have to cope with.

Fatima may bond with this sisterhood of sin — “You guys feel more comfortable naked than I do clothed!” She underlines the fact that she’s intellectualizing this whole “empowering through art” experience by dropping a Schrödinger’s Cat joke into conversation with them.

And that “How’re you gonna keep’em in the mosque after they’ve seen the lights of Club Lula?” thing extends to Fatima’s older brother Mahmoud (Khalid Klein). He’s supposed to keep an eye on her, and that involves stopping in your neighborhood cabaret for a drink.

“Looking for my sister. Strip joint’s a bit of a stretch. But with her, I’ve learned to be thorough.”

The dialogue often sparkles and the situations, although generally far-fetched, teeter on the edge of “Well, that’s at least possible.”

For a movie that loses itself in a lot of nearly nude onstage and backstage (Got to put the glitter on!) antics, “Becoming Burlesque” has room for little acting flourishes, the funniest involving Negar’s virginal Fatima learning to walk like a burlesque dancer, in stilettos (“Knees together, chin UP. Butt OUT. And smile!”) or flirt.

As I said at the outset, there’s nothing subtle here, no “fine line” is walked. But “Becoming Burlesque” makes a cute fictional introduction to the art form, the reason women practice it and what can happen when cultures this far apart run smack into each other — pastie to pastie.