It’s, in essence, a samurai sword fight film with Chinese touches and that “unified China” messaging that many a Chinese combat period piece preaches, as decreed by Beijing.

Do the “Cultural Appropriation Police” know about this?

Even if they do, perhaps the best word for “Kingdom” is in keeping with its slangy, profanity-peppered trash talk — badass.

Grand fight choreography, complete with dazzling swordplay and gravity-defying wirework, imposing production design roughly on a par with the great Chinese-made epics such as “House of Flying Daggers”  and “Hero,” it’s a “Lord of the Rings” without the rings.

Slaveboys fated to meet in youth and inspire each other in adulthood, feuding royal siblings, a secret tunnel defended by an ogre, archers, blowguns and a warrior princess.

Actually, she’s a queen, and she too is pretty badass.

So many MANY names. The sub-titlers spell them a couple of different ways, so how is a mere critic to keep all the generals, assassins, court counselors, sidekicks, etc. straight?

And that dialogue, all “bull” this and “ass” that, with the swaggering young hero, played by Kento Yamazaki, bellowing, bludgeoning, stabbing and slicing, or just slack-jawed in awe — manga/anime style. Every so often he bites off some smack talk (in Japanese with English subtitles) that is vintage Hollywood action hero fodder.

“You wanna piece’a me!?” “I’ll decide whether to kill you after I take care of them!”

In 255, BCE, Qin State, on the western edge of the Middle Kingdom, we meet two slave boys, Xin and Piao, thrown together on the farm of a taskmaster who gives them little hope for a future.

“There’s no climbing out of the slave class.”

Swords, which they cannot afford, are their only way out. So they learn with sticks in the sylvan forests near their village, figuring that “10,000 bouts like our lives depend on it” and they’ll be in a position to become great generals.

That dream ends when Piao is spied by a great general and singled out to serve the king. Xin (Yamazaki) fumes and practices on his own until that night, some time later, when Piao (Ryô Yoshizawa) shows up, mortally wounded.

He has a mission for Xin, and a map to help him fulfill it. Go, serve the young king that Piao was hired to defend and be a body-double for. Xin figures “Avenge Piao” is part of that mission, too.

Xin fights his way to that newly-deposed young king (Yoshizawa), bringing along this “boy” guide who wears an owl costume in disguise who can help.  He Liao Diao (Kanna Hashimoto) fools everybody but the viewing audience about her gender. She looks like she stepped off the cover of a Japanese pop pixie magazine.

They’ll need help, as is the way of such epics, an alliance with “The Mountain Tribes,” primitive brutes nobody can understand because they wear animal war-masks all the time. It isn’t until she removes hers that Yang Duan He (Masami Nagasawa), their leader, is revealed to be a two-fisted, two-swords-slinging warrior queen.

The fights are drawn-out and the story is formulaic silliness, and also plodding. But damn this is fun.

Director Shinsuke Sato did “Bleach,” also based on a manga, and brings dashes of style to the proceedings. He handles the “training montage” briskly and punctuates it with a striking backlit/moonlight duel.

A characteristic of Chinese films of this era and genre is the sea of bodies thrown at the camera, and Sato and Sony/Toho Studio (Funimation is distributing) spent the money it took to manage that in Japan.

Vast cavalries of mounted, pennant waving lancers are worthy of the Japanese master Kurosawa, and the set-piece fights are brawls straight out of (Chinese) martial arts classics, the epics of Zhang Yimou (“House of Flying Daggers”), John Woo (“Red Cliff”) and Chen Kaige (“The Emperor and the Assassin”). 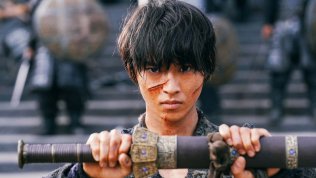 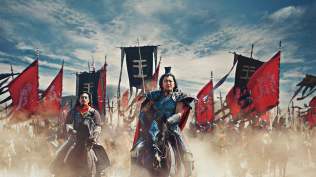 The action and spectacle don’t leave one much time to ponder the performances, which isn’t really what this is about.

Yoshizawa presents a regal stoicism, Yamazaki is all antic energy and “down and not out but on the verge of despair” when the need arises.

Nagasawa gets the real flourishes in the fight choreography, a veritable Japanese Wonder Woman not shy about slicing and dicing, especially the sneaky SOBs who dare come at her from behind.

This isn’t quite the spectacle that the signature films of the genre are, but lacking the seriousness of those isn’t exactly a shortcoming. Those films were long in order to impose stateliness via pacing. This one plays as drawn-out because, well, because we know girlfriend’s got a blowgun that could end this mismatched fight in a flash, or because we’re wondering why the heroes don’t tackle the giant ogre, the Vermilion Assassin or anybody else as a group.

Or maybe the filmmakers couldn’t bear to edit all this into something even more energetic and brisk — a 100 minute movie stuffed into a 134 minute one.

Credits: Directed by Shinsuke Sato, script by Tsutomu Kuroiwa and Shinsuke Sata, based on the manga (comic book) by Yasuhisa Hara. A Sony/Toho/Funimation release.