Movie Review: An innocent linebacker tries to clear his name in “Brian Banks”

Good performances and a healthy dose of earnest righteousness go a long way in atoning for the choppy structure and shortchanged characters that mar the telling of the inspiring true story of a life interrupted by a crime that never happened.

“Brian Banks” is about an All American high school football player racing towards a potentially glorious and lucrative future, but who lost years of his life to a laughably unjust accusation, trial and arm-twisted “plea deal” that was no “deal” at all.

That story is interesting enough, in a “Dateline: NBC” sense. But what this Tom Shadyac film is really about is discovering inner peace and resolve in prison, finding a mentor who helps you “get over” and forgiving those whose grievous sins against Banks have the audience muttering for blood, but not the hero.

Emerging star Aldis Hodge of “Straight Outta Compton,” “Hidden Figures” and TV’s “City on a Hill” plays Banks in high school, when the alleged rape at the center of this story occurred, then in prison, and ten years later when he’s trying to clear his name so that he can fully restart his life.

But we get to know him just as it’s all unraveling — again. Just after getting out, he’s playing college football at a smaller school than U.S.C., which recruited him, pre-prison. A change in the law takes even that away from him. Registered sex offenders lose more and more rights, over time, as every “get tough” measure under the sun makes its way through states and localities.

He needs the help of the California Innocence Project, whose founder, Justin Brooks (Mr. Tears, Greg Kinnear) just doesn’t see this case — Banks is out on parole, and he took an awful plea deal rather than go to trial, thus limiting his options — as a winner.

Brooks, his team and his law school students in San Diego must find something “extraordinary” — new evidence, new testimony — that will persuade the prosecutor’s office and judge who railroaded the 16 year-old Banks into prison to take it all back.

Good luck with that.

The movie here is what happened to Banks in prison, something the screenwriter and director seem to have missed. Prison is where the big, strong kid is tested and embittered, only to be redeemed by a prison teacher who counsels “All you can control in your life is how you respond to it” and “The path to happiness begins and ends in the mind” and “Given the right perspective, prison can set you free.” 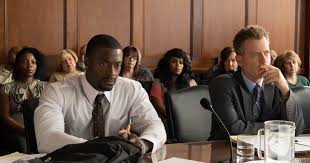 The filmmakers seem to think that casting Morgan Freeman in the part and giving him those lines (and virtually no others) to intone was enough. It isn’t. This is a redemption tale, a broken hero’s internal journey to the light. The hero and his mentor need more screen time together.

Ex-con Banks dating an art major/personal trainer (Melanie Liburd) who is thrown by his startling personal history, is of little consequence. His never-losing faith-mother (Sherri Shepherd) is a given.

At least the many life-interruptions engineered by the hardass probation officer (Dorian Missick is amazing and hateful in the part) give this story the sort of twist — how “paying your debt to society” is never done when “a broken system” keeps renewing that debt — that the movie’s formulaic story craves.

Even those who aren’t football fans know where this story is headed, at least in the courtroom. What’s interesting is that interior life-change that Hodges gets across, but that could use a lot more setting up via scenes with Freeman’s character.

And for a movie that decries a “broken system,” “Brian Banks” lets a plea-bargain-busting judge, bums-rush DA and inept defense lawyer off too easily.

The villain played up here is a veritable stereotype, a caricature of a young African American woman, cleverly and hatefully made flesh and blood by Xosha Roquemore.

All of which makes “Brian Banks” much more of a mixed bag of a movie than you’d hope. A “broken system” isn’t going to be driven to change by pulled punches like this one.

MPAA Rating: PG-13 for thematic content and related images, and for language