Movie Review: Football is everything to “The Bromley Boys” 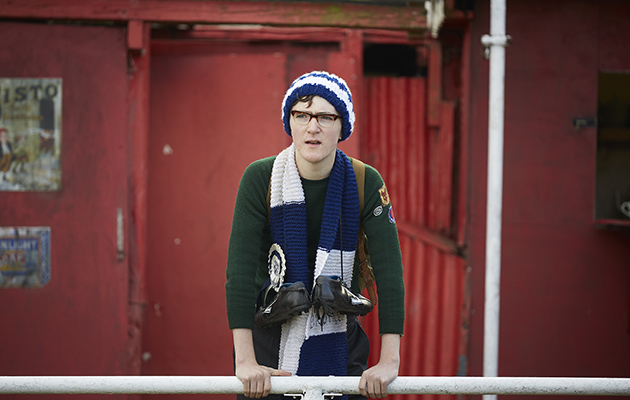 There is comfort and little risk in rooting for sports superpowers — the Patriots, Manchester Uniteds, Dukes and Alabamas of this world.

“The Bromley Boys” is about one lad’s slavish devotion to a faithless lover — Bromley F.C. (football club) in the Southeast of Greater London, North Kent for you geographers. Dave Roberts’ football memoir about frustration, awkwardness, social ostracization and first love makes for a sentimental and twee British period piece about the worst football club of them all.

Forget the century of Chicago Cubs misery, the ongoing agonies of the Chargers, the pointless existence of the Charlotte Hornets. Bromley, founded in the late 19th century, had to be the most frustrating underdogs to ever tie one’s sporting fate to.

Not that young Dave (Brenock O’Connor of “Game of Thrones”) planned it that way. He fell in love with the game when England won its last World Cup (1966). At 11, he’d have rather rooted for Tottenham Hotspur,” “like my friends.”

“You don’t have any friends,” grumbles his ever-“disgruntled” dad (Alan Davies).

“What about the team down the road, Bromley?” offers Mum (Martine McCutcheon), ever the peacemaker.

“FOOTball is rubbish!” thunders Dad, and that’s that.

Only it’s not. Doting Mum is all about encouraging the kid and buys Dave the “uniform” of British football fans (a scarf).

“You can’t choose who you’re going to fall in love with,” the adult Dave (also Alan Davies) narrates. Because that’s what this fandom became.

Mum & Son cook up a years-long ruse to cover Dave’s obsessive attendance at the tiny, tattered home field for Bromley on Hayes Lane. As the years pass, he will become the oldest Cub Scout in Britain, donning the hat, shirt and kerchief, slipping out to meetings and “projects” every Saturday. That’s what they tell Dad, anyway.

Dave’s obsession gets him noticed at school, in all the worst ways. He practices being interviewed about his “career,” and thus talks to himself. A lot. Even the girls bully him.

By age 15, he’s lost for life over Bromley, then a semi-pro team in the Isthmian League, and so very bad that they could lose even their low-team-on-the-totem-pole standing and be “relegated.”

Whatever Dave sees in Bromley, Ruby sees in Dave. As in “God knows what.”

The jokes in this tale “based on real events…and some rumours” are of the slight and sly variety.

Dave’s self-made protest T-shirt to oust manager Dick Ellis has “Dick Out” written on it.

School interludes show Dave getting pelted with wads of paper for promoting Bromley, and getting frequent canings from the headmaster for interrupting class to promote Bromley.

He sticks his foot in it autograph hunting when West Ham United comes to play a “friendly” and all their stars skip the trip.

“Excuse me, is anybody GOOD playing today?”

The football stuff sends him into the near-madness of total obsession — sneaking into the chairman’s office to gain intel, spreading “rumours,” fretting over the fate of his favorite player, “Stoney” Stonebridge (Ross Anderso , the very picture of 1970s mustachiod dash).

Ruby? He just uses her to access her Dad, who is plainly spending beyond his means — an Aston Martin, a mansion, a Russian trophy wife played by Anna Danshina.

To “come of age,” Dave’s got to reconcile his obsessions and become a more considerate person, maybe find out why Dad has a limp, why Mum indulges his football mania, why his teachers all find him a waste of space. He needs to see what Ruby sees in him.

“Twee” is just a more polite description of British comedies that err on the side of “cutesy.” The almost-omnipresent narration here takes on “A Christmas Story” incredulity, but never adds much that is funny to the proceedings.

The entire picture is basically one big gag that has a hint of “inside joke” to it, as any Brit could tell you Bromley was a laughingstock for decades, and the kid’s into Bromley, of all clubs, in its direst state.

But young O’Connor has a pale, walking bean-pole awkwardness about him, and uses that ungainly appearance to good effect. Nerdy glasses or not, rich and pretty Ruby wouldn’t give him the time of day.

Except that he’s a lost cause. And like Bromley F.C. circa 1970, there is glory and romance in falling for something or someone that’s going to challenge your faith and maybe break your heart.

Credits: Directed by Steve Kelly, script by Warren Dudley, based on the Dave Roberts memoir. An Uncork’d Entertainment release.