Documentary Review: “Hurley” remembers a Racing Legend in his Day, Closeted and Gay

It wasn’t “Stop the PRESSES” news last year when racing driver Hurley Haywood came out to the world that not only was he a five-time 24 Hours at Daytona, three-time 24 Hours of Le Mans and two-time 12 Hours of Sebring race winner, but that he did all that as a gay man.

Sports car racing is still regarded as a rich gentleman’s sport in this country, so big “news” there doesn’t reach far beyond the asphalt. In the sporting world, it’s lower-profile, save for the occasional movie star (Paul Newman, Patrick Dempsey) who dips his toe in it.

The wealthy-preppy “movie star handsome” Haywood fit right in with that crowd. And his sexuality rarely came up in his 1970s to early 90s heyday. He wouldn’t let it.

“Pretty quiet” is how he thinks others saw him, when asked about his reputation among others in his sport in the new documentary, “Hurley.”

“I was super shy…almost throwing up if I had to get in front of a microphone.” He admits that in his early days, he even gave thought to driving off the course and losing “so we wouldn’t win” and he wouldn’t have to face the press.

That’s how he comes off to this day, a legend in his sport but a retiring man who shows up at the big races, shakes hands and poses for photos with fans, but keeps his private life to himself.

“It’s not easy to talk about,” he tells filmmaker Derek Dodge, and his mannerisms and demeanor back that up. He makes little eye contact in on-camera interviews, back then (archival footage) and even in the present day.

But behind the wheel, he was something else. Haywood might modestly say he just “keep my foot down longer than the guy next to me” was the secret to his success. But contemporaries, peers and admirers all insist it was more than that.

Patrick Dempsey says “He won in any type of car he could drive…a legend.”

One and all express admiration for Haywood’s “discipline,” which the film never quite links to Haywood’s self-control in keeping his sexuality and lifestyle secret, though Dempsey hints at that.

“He’s the quintessential race car driver,” but “there’s a vulnerability there,” Dempsey says. “He IS different. He’s been different since the moment he was born.”

“Hurley” tracks Haywood’s life, with his former debutante sister Hope filling in the blanks about the early years — behind the wheel at 12 — on through his move to Jacksonville for college, where he won a Corvette autocross race, edging local star driver Peter Gregg. Gregg promptly recruited the young Haywood for his Brumos Porsche racing team and years of glory followed.

Haywood was winning races on the track, meeting his future husband Steve Hill at a Jacksonville gay bar, and keeping it all on the era’s stigmatizing “down low.”

But there were whispers, even back then, winking headlines in stories about Gregg and Haywood, the “Batman and Robin” of sports car racing.

Haywood says “my core people knew,” but he was “indiscreetly” warned by a colleague “You don’t mix business and pleasure.” Hill, his partner and now husband, confesses to feeling hurt by being unable to share in Hurley’s decades of big moments, watching him with friends in the winner’s circle “through a chain-link fence.”

Sister Hope notes the many ways Haywood had to “keep his racing life and his personal life separate.”

Even today, longtime friends and colleagues become evasive when asked if they think Haywood “lost sponsors” or suffered other discrimination back when homosexuality was kept out of the spotlight and “macho” was in on the tracks.

Not every off-camera question screenwriter turned documentary filmmaker Dodge asks — “How did Peter (Gregg) find out?” — earns a straight answer.

“People could just think what they wanted to think.”

The film gets at the sometimes thorny relationship with the abrasive “Peter Perfect” Gregg, which led to the winning team’s breakup. Even that didn’t slow Hurley Haywood’s ascent to the pantheon of his sport — winning big races from the ’70s into the ’90s. 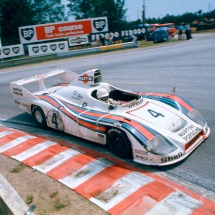 In the film and in life, Haywood got and is still getting his wish, that he be judged for how he performed on the track, “winning with any kind of car they put him in” as Dempsey puts it.

To that end, “Hurley,” like its subject, is most as home at the track. Much of the film was shot at Daytona International Speedway and we see Hurley, consulting with Dempsey and his team, overseeing timed driver-changeover practice, taking us on a tour of Victory Lane, showing us the placard at the track listing his achievements.

Dempsey is here not just as a cheerleader (“a legend of the sport”) who regards Haywood as a mentor, but to explain endurance racing (teams of three drivers sharing behind-the-wheel duties) and deliver context — about how vastly different attitudes towards sexuality have changed.

That may have been the hook that got “Hurley” made. But Haywood’s as in control in the movie as he has been in his life — not giving much away, even his “intimate” life treated with discretion and an arm’s length detachment. He lets Dodge and us in, but not that far in.