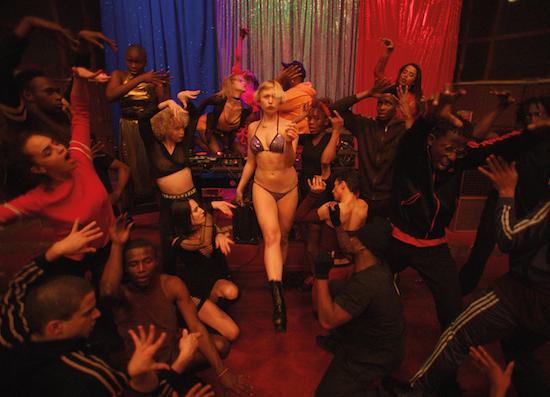 Fiercely feral, dis-orientingly trippy and (for some folks at least) sure to inspire flashbacks, Gaspar Noé’s “Climax” is horror that hits you where you live.

This is “Suspiria” without the cryptic supernatural nonsense, “Black Swan” without ballet, a tale of “the dance” that takes the stereotype that dancers — uninhibited hedonists and born sensualists — “live for the dance” and adds drugs to take away whatever inhibitions they might have left.

Noé, in the best Poe, Agatha Christie or “Friday the 13th” tradition, fills a remote school full of young, lithe and talented danseurs, showcases them as they celebrate the end of rehearsals with flexibility and skills most of us cannot imagine and then introduces LSD to their popping and locking, twisting and contorting bacchanal.

Noé introduces us to the players “A Chorus Line” style — video “interviews” before casting, glimpsed on a TV set parked conspicuously between books on schizophrenia and a VHS copy of “Suspiria.” This happened in 1996 we’re told, and we meet Shirley and Cyborg, Rocco and Omar, revealing “my darkest fear,” and their utterly fanatical devotion to dance.

“It’s all I have,” says Lou (Souheila Yacoub). “I can’t be anywhere else,” adds Riley (Lakdhar Dridi).

Black and white, Gallic and Middle Eastern, gay, straight and all points in between, they’re primed for their “chance in a million” with choreographer/dancer/”boss lady” Selva, played by Sofia Boutellava for  of “Kingsman,” “Hotel Artemis” and the titular monster of “The Mummy.”

The party they throw to celebrate the end of three snowy days of rehearsal is a fluid, supercharged dance-off with dancers strutting their moves, showing off all manner of sexy dance wear — pausing only long enough to flatter the hell out of each other’s skills (in English, and French with English subtitles), flirt as they arrange their latest hook-up and partake in the evening’s libation.

“I made some sangria.”

It takes a while for what’s in the sangria to peak, a bit longer for Selva to hiss “What have you DONE?”

Chatterbox Emmanuelle (Claude-Emmanuelle Gajan-Maull) made the sangria. But she drank it, too. And she’s got her little boy with her for the weekend. Would she do that?

Omar (Adrien Sissoko) may have grown up in Muslim household, and still doesn’t drink. But joining a dance company isn’t exactly a Fundamentalist move and LSD seems way out of character.

Somebody else is pregnant, others are bitter over failed relationships, David (Romain Guillermic) may be “a ticket to an STD” after cutting a wide swath through the company, sexually. Might he have done it?

Doesn’t matter. Logic doesn’t apply when everybody shrieking accusations, screaming at this or that person accused, pounding and kicking them or tossing them out into the snow.

Noé (“Enter the Void”) parks his camera overhead, flips the image upside down, hurls light and darkness, dancers’ bodies and dancers’ blood at us as we watch a lot of healthy, perhaps not that well-adjusted young people dance until they go off their rockers.

But not before the longest music credits in screen history. He positioned those credits, and the film’s finale, in a final disorienting flip designed to look like a video editing “glitch.” They come at the beginning of “Climax.”

It’s unnerving at times, assaulting at others. “Disorienting” is the idea, and even if many of the tricks are simple and the plot unfolds along a generally predictable track, “Climax” achieves that goal. And how.

MPAA Rating: R for disturbing content involving a combination of drug use, violent behavior and strong sexuality, and for language and some graphic nudity

Credits: Written and directed by Gaspar Noé. An A24 release.