Posted on December 12, 2018 by rogerinorlando

Well, it’s something to see. Producer (and co-screenwriter) Peter Jackson always makes sure of that.

The surprising thing about the film of Phillip Reeve’s “Mortal Engines,” essentially a movie about roving, bulldozing cities that devour small towns, is how long this eye candy holds your interest.

It’s a fascinatingly detailed, gears-and-tech filled wholly realized and just this side of viable steampunk civilization, a dystopia that offers something new.

Well, aside from the endless borrowings from oh, “Star Wars” and “Howl’s Moving Castle” and tech that can seem like props left over from “John Carter” of Mars. Much of that is on Jackson & Co., visual and plotting departures from Reeves’ books.

About 1100 years in the future, humanity is 1000 years past “The 60 Minute War.” Civilizations perished, continents cracked and humanity barely escaped extinction.

People have gotten by on adapting and maintaining old technology, and for that, civilization depends on archaeologists. With their help, engineers have built Traction Cities, mobile tractor-driven complexes with “tiers” of dwelling carving the social hierarchy in stone.

These cities live by moving, rumbling across the mostly-depopulated plains, crossing land bridges created when continents shifted. They weigh so much they leave canyon-sized ravines in their wake as they devour small towns or neighborhoods which had to get themselves rebuilt on bulldozer or earth moving equipment treads or wheels, just to escape the all-devouring cities.

Did Reeve really anticipate the planet’s city/rural conflict this unerringly? Here is every Red State or French State gripe about “elites” in cities, in sci-fi form and parked on top of variations of NASA’s giant rocket-hauling crawler.

If that analogy is too subtle, the Mayor of London (Patrick Malahide of “Game of Thrones”) makes it Brexit obvious.

“We should never have gone into Europe!”

London, or what survived of it (recognizable landmarks are stacked on it, from St. Paul’s to Trafalgar Square’s gigantic lions) has to move and devour to survive — “Municipal Darwinism.” That’s a model that’s unsustainable, and the one guy who seems to get that is archaeologist/fixer Thaddeus Valentine (Hugo Weaving). He’s the “hero” of the piece, until we see a Bavarian town chased down and devoured by London, and this girl who was there (Hera Hilmar) stabs Valentine, right in front of his adoring daughter (Leila George) and her new admirer, the curious and politically unconnected museum curator Tom (Robert Sheehan).

He doesn’t have a chance to flirt with the pretty blonde Valentine daughter, as he finds himself with the stabbing girl, Hester, dumped out like garbage into the wastelands that are called “Outlands” because they always are in sci-fi.

They kind of fight each other and fight to stay alive in a world where almost everybody lives in something that clanks across the landscape, or just below it to hide from the Traction Cities. The slave trade there has cannibalism as part of its pricing system (wildlife and livestock seem to have vanished). But there’s an Anti-Traction rebellion (of course). Maybe they can find the warrior rebel Anna Fang (Jihae, the quintessence of sci-fi badass cool) and fight back against the cities.

“We’re not going to tell each other our sad stories,” Hester hisses in the first act, which lets us know she’ll tell hers in the second act. Hester has scars and a history. And part of that history is hunting her down, “Terminator” style. The rebels have style and youth and refuges, like a cloud city held up by balloons, and aircraft that still have their “John Carter” price tags dangling from the wings. 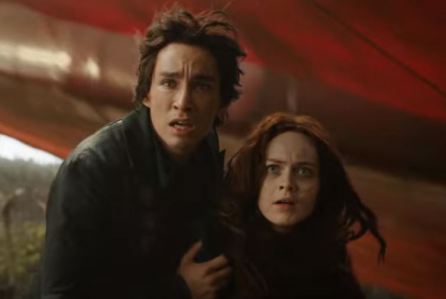 It’s all kind of mindlessly engrossing, the digitally-augmented scale of this enterprise eye-poppingly impressive. For a while, anyway.

It all ends — the immersion, any enjoyment I got out of it, anyway — in an instant.

You’ll know it when it happens. And not just because the picture grinds its gears and starts shaking itself apart right after it. It’s totally a script issue, because Jackson’s favorite storyboard artist Christian Rivers, turned into a director here, makes this thing look like $100 million bucks, start to finish.

Everything — every line, every act, every action — that comes AFTER this #mortalfail is so obviously “Star Wars: A New Hope,” as to irritate. You realize, “Hell, what function DOES Valentine’s daughter serve in all this, except as set-dressing?” You know where the “noble sacrifices” will come from. The performances and the empathy they fail to generate stand out more.

And the moment the phrase “The East” is dropped, you leap to the conclusion, “Here’s where Jackson and Universal (and Reeve, too) throw the Chinese/Pacific Rim market a bone, long before they do. West bad, East good?

Every time that happens, gears aren’t the only thing that grind here.

MPAA Rating: PG-13 for sequences of futuristic violence and action

Credits: Directed by Christian Rivers, script by Fran Walsh, Phillipa Boyens and Peter Jackson, based on the Phillip Reeve novels. A Universal release.