Movie Review: Stallone is back on the beat with “Backtrace”

Posted on December 7, 2018 by rogerinorlando 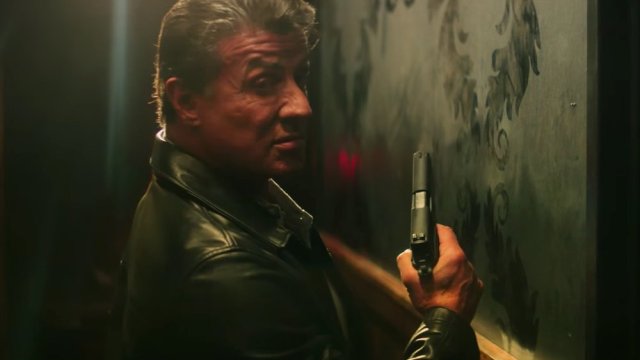 We all have trouble managing that post-“Time to join AARP” card in the mail transition. The problem is magnified if you’re a  brand name action star. “Aging gracefully” is rarely in the (AARP) cards.

At 72, no amount of Human Growth Hormone is going to render Sylvester Stallone a convincing “I still got it” boxer, or police detective. Aged vigilante like Bruce Willis in “Death Wish?” Sure. Police chief or police captain, any number of authority figure roles? Give him the same shot at those that you’re giving Schwarzenegger.

He’s finally let go of Rocky Balboa, but there’s no reason he should quit work if he doesn’t want to. It’s just a question of how you bill him, where you cast him and how much he can still command in salary.

All of which come to a head in “Backtrace,” a Georgia tax breaks film project that has two big names — Stallone and Matthew Modine — and a hunky TV star (Ryan Guzman) in a supporting role, but top billed in the credits.

It’s basically a Matthew Modine movie, casting the white-haired 50something star of “Full Metal Jacket” and recently, “Stranger Things,” as the lone survivor of a big bank job, kidnapped from prison to recover his loot, chased by Stallone’s long-in-the-tooth Savannah police detective.

But how can you sell that to viewers under 60? So, Guzman’s film it is.

“Backtrace” opens with a heist gone wrong — murderous double crosses, a shootout in the coastal swamp forest outside of town. Mac (Modine) is a LOT older than the other hoodlums in his gang, but he’s the only survivor — with a catch. He took a shot to the head and has lost all his memory.

Too bad. To prison he goes, and seven years later, Det. Sykes (Stallone) and Savannah PD are no closer to “solving” the case (double-crossers made off with some of the money, murdering Mac’s gang to get it) or recovering the missing millions.

That’s when Lucas (Guzman) sidles up to Mac in the hospital cafeteria and offers to get him out. As Mac will never see freedom, thanks to his sentence, he grabs the deal even though he doesn’t remember anything that would be of use to his “rescuers.”

Not to worry. Lucas and Erin (Meadow Williams) and Farren (Tyler Jon Olson) got their hands on some new memory-jogging truth serum. A few treatments and Mac will remember all, right?

Christopher McDonald shows up as a Fed ready to take over the case (which the Feds would have managed the day the original bank robbery happened) with a “Captain…I’ll expect full cooperation from your department.”

It’s not the first trite screenwriting cliche here. That might be “Nobody GETS HURT. THAT was the deal!” which came right after the opening credits. And it’s not the last.

There are laughs aplenty in the dialogue, which has several characters spout nonsensical lines — “You told me the title was clear,” Lucas says to Erin when the cops snoop around the repossessed “safe house” where they have Mac stashed.

A car has a title, Mr. Guzman. A house requires a deed. Guzman has so many of these boners you wonder if the screenwriter hated him.

But the crooks trying to get to that loot are only marginally more interesting than the cops pursuing them. And neither half of the story has any urgency to it. 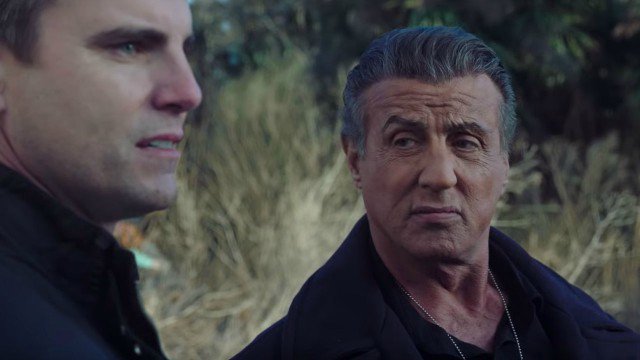 Stallone scowls, delivers a little gravitas and spars with the interloping Feds. But he can’t hide the fact that he’s biding his time for the final shootout.

Modine has the most to play and does what he can with this conflicted guy whose bad man past is a memory he maybe doesn’t want back.

Guzman? Well, he looks good in a beard.

So what DO you do with a 72 year old action star who has lost a step or two, if not his growl? Not this.

MPAA Rating:  R for violence and some language

Credits: Directed by Brian A. Miller, script by Mike Maples. A Lionsgate release.