Netflixable? “Hold the Dark,” try not to lose track of Jeffrey Wright

Posted on September 30, 2018 by rogerinorlando 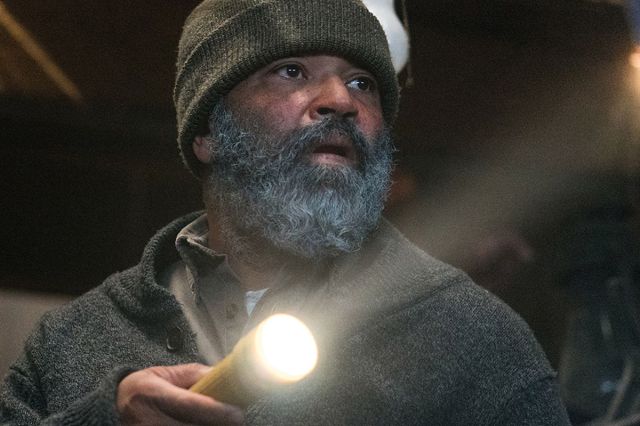 Epic shootouts in the movies make you clench up, reflexively duck. They’re visceral and heart-pounding, which is why they’re an integral part of many a best-selling video game.

It’s that famous Churchill quote about being shot at and missed — “There is nothing more exhilarating than to be shot at with no result.”

There’s a doozy or two in “Hold the Dark,” and by “doozy” I mean comically melodramatic in defiance of reason, common sense and any police procedure you ever heard of.

It gives this unfortunately uneven Alaskan thriller by the director of the bloody-minded “Green Room” (based on a William Giraldi novel) a “Wind River Botched” feel,  or would if hadn’t wandered off the reservation half an hour earlier.

But it starts so soberly, creating such a bleak, drained-of-emotion mood that makes its lurch into horror movie conventions and blunder into a bloodbath all the more disappointing.

Jeffrey Wright plays Core, a tough-minded wolf behavior expert summoned to the mid-winter wilderness, a town where wolves are taking children. The woman who writes to him read his book. She’s a military wife, Medora Slone (Riley Keough) who wants closure before her husband (Alexander Skarsgård) returns from a tour in the Middle East.

“Come help me, and kill him,” she writes. “I know you feel sympathy for these animals. Please don’t.”

Core is no ivory tower academic. He may be unused to the cold, but he knows his quarry and is willing to pull the trigger if he finds the pack that did this.

Core stays with Mrs Slone, whose grief has gutted her, turned her speech into something metronomic — mechanical. She seems off. An there’s this mask on the mantel, the silliest piece of foreshadowing this side of “Friday the 13th” movies.

There are father-son flashbacks, and the setting shifts to Afghanistan, where Vern Slone is seen as a murderously efficient machine gunner, coping with news of his son by searching for death.

Core struggles to understand what he’s stumbled into, tries to filter what the white locals and suspicious natives (Julian Black Antelope is scary, tough and cagey Cheeon) and James Badge Dale is the state police officer who suddenly realizes he needs “everyone” in his department in this small town, thanks to the shocking burst of violence that signals the film’s shift from the real world to the surreal.

The point of view drifts, the “hero” we follow drifts and the carnage piles up as director Jeremy Saulnier and his screenwriter/collaborator Macon Blair try to wrestle a savage beasts/savage humans allegory into shape.

Wright is one of the great character actors working these days, and losing track of him and his character hurts the film.

It’s an almost pitiless thriller, as unforgiving as the wilderness that it is set in, another reason the “Wind River” comparison is apt.  But every time it strays from the realm of the realistic, “Hold the Dark” stumbles.

And about that big shootout. It’s hard to believe Alaska’s cops somehow missed out on the Militarization of Policing in America, even if it’s not hard to imagine police being outgunned in the land where spree killings were common many winters before Columbine.

It’s not the only scene in the movie that hobbles it, but it does put an exclamation point on a tale that gets so much right — setting, atmosphere, tone and casting — before it goes so wrong.

Credits:Directed by Jeremy Saulnier , script by  Macon Blair , based on the  ook. A Netflix release.