Documentary Review: A most political artist has the last word in “Matangi/Maya/M.I.A.”

Mathangi “Maya” Arulpragasam, the Brit-Sri Lankan rapper, designer and filmmaker known M.I.A., is even more fascinating as a person than she is as an artist.

Daughter of a leader of the Tamil Tigers, an ethnic Sri Lankan minority that started a civil war to win civil rights, a war that devolved into terrorism against civilians and a defeat the U.N. and much of the world acknowledged turned into genocide, she is outspokenly political, distinctly South Asian in dress, music influences and dance. She took global pop culture by storm in the mid-2000s, earning Grammy and Oscar nominations (a song in “Slumdog Millionaire”), status as “the only Tamil in the Western media” and a place at a Super Bowl Halftime Show, where she flipped off America and was sued by the NFL for it. 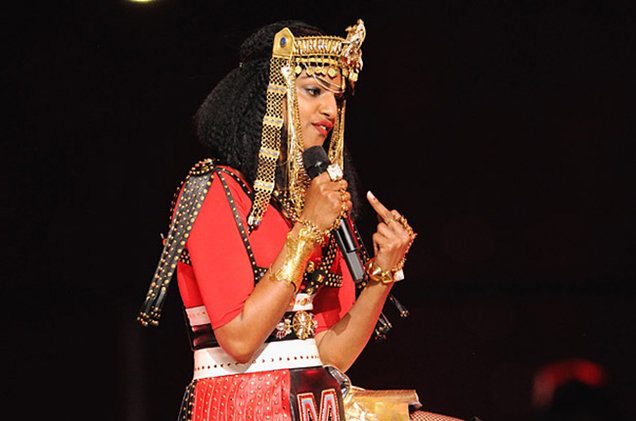 Performing with Madonna, dueting with XTina, Bjork/Madonna/Timbaland and Missy Elliot-influenced, she had me at “flipped off the NFL.”

Her British art school/film school mate Stephen Loveridge shadowed her, filmed her and collaborated with “Maya” on “Matangi/Maya/M.I.A.,” a quick-take career, personal life and activism and art documentary about the now-40something global icon.

It plays like a self-portrait — arriving in Britain at 10 with her mother and siblings, fleeing the civil war her father is fighting, dancing (“Music was my medicine.”), dealing with racism (If you’re brown, “you’re a Paki.”), art school where she learned to make documentaries, and then the fateful backstage meeting with Justine Frischmann at an Elastica concert.

That was Maya’s entre’ to the music business, filming the band and directing videos. But she looked at the crowds Elastica was pulling, saw their “access to a microphone,” and wondered, “Why don’t you SAY something?”

Hearing hip hop beats had turned her own ears to America and rap. When she mixed her own music and cooked up her own rhymes, the singing had an immigrant’s ear for Cockney filtered through Missy Elliott’s under-enunciation — vocals as bleeting sound and beat. The music and dance that accompanied it? Distinctly, defiantly South Asian.

And as her fame and power grew, return visits to Sri Lanka radicalized her even as she was making music videos there, Third World flavor with a hip hop beat. Something about her story, her politics and her only-one-of-her-kind looks clicked, and next thing you know she’s at Coachella, in Lollapalooza, a sea of American white kids fist-pumping her act.

Her style, smart outspokenness, controlling her image and art, are a wonder to behold. Directing videos for herself and others, co-writing with Madonna and others, endless magazine covers, her music in every hip film or TV show, “album of the year” and “artist of the decade” honors from Rolling Stone — being into M.I.A. was the in-thing to be.

And then controversy — her politics dismissed (Bill Maher) or edited out of interviews (CNN), her metaphoric videos about the Tamil genocide yanked from Youtube, a sloppy, ethically suspect hatchet-job profile by Lynn Hirschberg in The New York Times Sunday Magazine. A lot of stuff led up to the big flip-off moment, we can see.

And if the champion of the poor and oppressed couldn’t see how hooking up with a famous producer (Diplo) who then made her career, and taking up with another of the Seagrams-rich Bronfmans looked, maybe she isn’t as smart as we think.

Odd tunes waft through the background, music she hears which others are playing on their boom boxes in her London flat, in Sri Lanka — Kenny Rogers’ “Lucille,” Dylan’s “Mozambique.” Real musicians are awash in music, almost drowning in influences.

Loveridge is there for the aftermath of the Super Bowl (a cell-phone recorded not-quite-confrontation backstage, a BIG laugh back in the hotel suite), the lawsuit (settled)  — “OK, we’ve done THAT.”

It’s sad to see she’s soured on America, where as the song says, “every generation throws a hero up the pop charts,” which we in the media then chip away at and tear down.

She’s over 40 and a single mom, her cause has had to morph into something less specific than a genocide that, as she marvels, is quickly put in the past (a New York Times travel piece on “hot vacation spots” lists post-civil war Sri Lanka and sets her off).

But self-aggrandizing hagiography that it is, “Matangi/Maya/M.I.A.” leaves you wondering where her ever-evolving (Industrial, lyrical reggae blues rock rap?) music will take her next, and how she’ll channel her fame in the future, and even if that fame will last past her white-hot notoriety.