Movie Review: Not even a life without pain is “Painless”

Posted on September 19, 2018 by rogerinorlando

“Painless” is a thoughtful, lightly-affecting drama about a lonely man’s search for feeling in a life without pain. It has an affecting gimmick, but lives on its engaging performances, good actors playing lived-in, flawed and realistic characters.

Henry is introduced in the opening credits, snippets of home movies that capture an accident-prone, awkward childhood characterized by a lack of crying. His mother knew before the doctors did. Henry can’t feel pain.

The adult Henry, played by Joey Klein of TV’s “This Life,” has been obsessed with his condition since he was diagnosed. He drops ice cubes into coffee, and into home delivered Chinese noodles. When you can tell something is too hot, you can’t take chances.

He doesn’t make eye contact, bundles up against weather when he cannot tell if the cold will weaken him or the sun might burn him.

Henry is now a scientist and a loner, testing away with his chemicals and his lab rats in a loft he’s turned into a laboratory/apartment in Red Bank, Brooklyn.  He’s always bursting in on his specialist, Dr. Parks (Kip Gilman), demanding this or suggesting that.

And he narrates this lonely life, the way characters do in movies whose filmmakers cannot give up their Voice Over Training Wheels.

“Aristotle said, “You cannot learn without pain..,Every once in a while, nature makes a mistake.”

But Henry HAS learned — to support his research by synthesizing pain drugs for a low-level drug dealer (Tommie Sox). And he’s learned to see pain in others, the “tells,” signs of other people’s aches, the obvious winces and more subtle give-aways.

Everybody has them and the guy who cannot feel them sees them all around him, even in the pretty redhead (Evalena Marie) who spills hot coffee on him on the subway.

Eddie the drug dealer would like to expand operations. Shani the redheaded waitress might want to get to know him. Dr. Parks would love for him to visit a clinic which treats kids who face some of the same medical problems Henry does, out of support and concern.

“I don’t have time for distractions,” is what he tells them all. Even Dr. Andrews (Pascal Yen-Pfister), a researcher who would love Henry’s help in a study that will take the inevitable shortcuts that might lead to a breakthrough, gets that brush-off.

“Painless” is thus set up as a battle for Henry’s soul, conscience and future, a man trapped inside himself, insulated from the world, who might have to poke his head through the bubble to develop empathy, affection, to realize “life’s too short” and maybe living it would be more productive than manically striving for a cure. 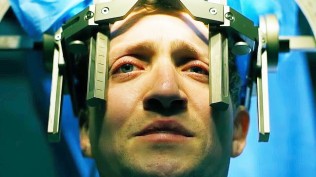 Will he open up to Shani, whose attraction has more to do with curiosity than pity? Will he stick to the rigid regimen of The Scientific Method or gamble on his own theories about instant cures?

Klein makes Henry just charismatic enough to warrant Shani’s attention, just clueless enough to not “get” why she only uses marginally effective “organic” bug repellents in her swath of the Red Hook Community Greenhouse. He’d just zap the plants with pesticides.

“That’s the point of science. Find the flaws in nature and fix them.”

Yen-Pfister’s Dr. Andrews is like every French-accented “scientist” since “Raiders of the Lost Ark” — ambitious, egotistical, an ethically shady risk-taker who doesn’t play by the rules.

Horowitz gives his debut feature the foreboding of horror, or at least melodrama. But he keeps everything close to the vest, not giving away the picture’s secrets too easily, not giving in to cant situations and plot twists.

The voice-over gets old, and he’ll look back on this one someday and see it for the anti-cinematic crutch it is. But arch as that device is, Henry and “Painless” pull us in, creates suspense in Henry’s pursuit of a cure and let us feel his pain when he opens himself up to another heart for the first time in his closed-off life.

Credits:Written and directed by  Jordan Horowitz. An Indican release.