Movie Review: Predictable “Age of Summer” grows on You

“Scruffy little comedy” is critic-speak for a movie that, whatever its shortcomings, makes up for them with little grace notes.

It could be a scene, here and there, a particularly charming story thread, grand cinematography, a stand-out funny performance or the mere presence of say Peter Stormare that lifts it.

And every one of those applies to “Age of Summer,” an engaging if “scruffy little comedy” about a boy’s coming-of-age during a summer training to be a lifeguard on California’s Hermosa Beach.

It’s got likable leads, a very funny supporting player, and Peter Stormare as a Sage of the Sea nicknamed “Rock God.” And it is just beautifully shot and cut by DP Darin Moran and editor Daniel James Scott. Director Bill Kiely’s specialty is youth culture skateboard and surf videos, and he and his crew make this as pastel-sunny and foamy as a California summer of memory.

Percy Hynes White, who uses his middle name for obvious reasons, is Doug, who insists everybody call him “Minnesota.” He’s moved to Cali with his family in 1986, a principal confused Chicago for a city in “Minnesota,” and it’s a nickname he can live with.

His “bros as we grows” pal is Woods (Jake Ryan, whose parents or agent must have loved “Sixteen Candles”). Woods is still into LEGOs and “He-Man” cartoons. Minnesota? He’s taken to the beach, and noticed all the bikini-clad surfer girls there.

Somehow, both of these chicken-breasted 13-years olds have made the cut for a summer long train-and-try-out for South Bay Lifeguards. Their supervisor/mentor/drill instructor isn’t from around there.  Do NOT call address Tony (Diarmaid Murtagh of “Vikings”) the wrong way. Seriously.

“Who in a buzzard’s dangly bits are you callin’ SIR?” He is “as mad as a meat ax” and his junior lifeguard charges have “a few ‘roos loose in the top paddock.”

What language is that?
“Scottish, I think.”

Tony hazes his recruits, works them, uses an indelible magic marker to label them with nicknames on their backs. Because Woods is a wuss, “a flaming gash of a peckerwood,” Minnesota gets labeled “Peckerwood’s Friend.”

Brooke (Charlotte Sabina) is the muscular surfer who makes every boy’s heart pound, but every female on guard here is “Baywatch” worthy

Over the course of the summer, Woods and Minnesota will be bullied, Minnesota will make friends with the older-savvier Mathis (Jonathan Daviss) and the disreputable teens Pots (Kane Ritchotte) and Pans (Mccabe Gregg).

Minnesota will learn to surf, taste his first beer (in a white can labeled “beer,” very scruffy) and lose his shiny new “ripper” (BMX bike). It’s the loss of his bike that sends him into “The Rocks” in search of “The Rock People.” And that’s where he obtains the wisdom of Rock God (Stormare). 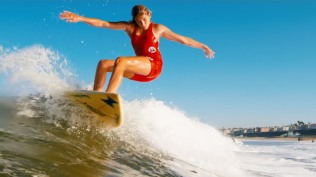 “Age” is saddled with inane voice-over narration, the “adult” Minnesota, who sounds suspiciously like that MTV sports dude, Dan Cortese.

“The Pacific Ocean was cold, dark and deep,” we learn.You don’t say.

Murtagh makes the movie worth a giggle, all by himself, singing Tony’s made-up drill instructor cadences with Aussie (He’s actually Irish) gusto.

“Swimmin’ in the surf ’til my eyes fall OUT, that’s what the Junior Guard’s all about!”

A little naughty nudity — an introduction to “girlie magazines” — give this teen comedy its sole moments of “edge.”

White (“The Gift”) makes an amiably scrawny leading not-remotely-a-man (his voice changed during the shoot),

Stormare is winning as the Rock God, Sabina turns Brooke into more than just an object of desire and Murtagh gets a laugh in every single scene he’s in.

And the situations, no real adults included, amuse just enough to make this “Summer” worth remembering.