OK, probably not your genre either. “Hostel” was a long time ago. But just in case it is…

Oliver (Russell Geoffrey Banks) is a proper English lad who likes old things. He has old clocks, old luggage, out of fashion clothes. He uses greasy old-fashioned pomade in his hair.

He listens to Big Band jazz. He wears Buddy Holly glasses, even in the shower.

And of all his old things, he’s fondest of his mum, the oldest of the old things in his life. Mum (Margaret Roche) is a real piece of work.

He stammers, talks to himself, talks himself into approaching each victim.

“Just get up, go over there. Tell her she’s pretty. Girls like that.”

And Mum? She’s on his case, knocking back whisky and wine and barking orders via Skype.

“Give Mommy some SUGAR!” 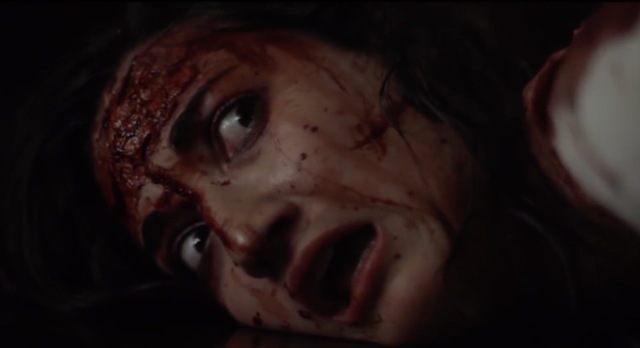 But as he’s trolling the amusement park, the stunning Sofia (Sara Malakul Lane) approaches him. She starts telling him her dreams. Maybe if you look like a Domhnall Gleeson who never came out of his nerd-shell, this could happen.

Sofia’s got a vulnerable streak, a trusting side and a past. So Oliver doesn’t want her to suffer the same fate as every other woman he talks up.

Director Richie Moore serves up a colorful fever dream of manipulation, hallucinations and violence, a little of it — too much of it — played for horrific laughs. It’s slick and repellent at the same time.

The locations have a certain novelty, not your generic “Bangkok binge” look.

Roche works herself into a delirious, foul-mouthed lather as a “Psycho” mom, and Banks gives himself to over-the-top with a certain glee. That Tony Perkins/”Psycho” dichotomy and subtlety isn’t what they were going for here.

But the monstrous twists aren’t all that. And the pacing is awfully slack for an 86 minute movie, lovely scenic bits of filler meant to capture the struggle for Oliver’s soul. Maybe it’s just the gruesome, excruciating detail of the dismemberments, with an illogically sick “love story” glibly grafted on it, but this thing seems to go on forever.

Again, not my genre. I thought it was dead, and in the #MeToo era, it ought to be.

But as for the nude, debased and abused “victims” here, I’ll leave the “We sent you to acting school for THIS?” chastisement for their mommas.