Movie Review — “Pope Francis: A Man of His Word”

There’s a twinkle to Jorge Mario Bergoglio, known to the world as Pope Francis. His crinkly grin reminds me of the British actor Jonathan Pryce, when Pryce isn’t portraying a Bond villain.

Something about that smile smacks of utter sincerity, a modest, soft-spoken man of genuine humility and an eye for the perfect gesture. That explains at least some of his adorable appeal, because he’s not the most dynamic preacher of speaker.

But as the new documentary, “Pope Francis: A Man  of His Word” makes clear, it’s not how he says things but the things he says and does that matter. When he visits a favela, pressing the flesh with Brazil’s poorest of the poor, when he’s comforting children in a hospital in the Central African Republic, when he’s wading into the rainy Philippines on the heels of a typhoon to comfort victims, or when he’s gently hectoring the U.N. or the U.S. Congress about “the globalization of indifference, he’s leading the world by example. He’s walking in the shoes of his namesake, St. Francis of Assisi.

That’s the angle director Wim Wenders (“Wings of Desire”) takes with this film, started by others but finished and narrated by him. Wenders illustrates the life of St. Francis in silent black and white footage, “flashbacks” to show why this pope chose that saint, champion of the poor, the young, the flora and fauna of the Earth itself, as his namesake.

“A Man of His Word” is most impressive in showing the pope’s appeal, not just in huge rallies all over the world, but in a prison in Philadelphia, among refugees who brave death as sea to cross to Greece or Italy.  See him wash the feet of the least among us, inmates or those trapped in lives of poverty, and tell me you’re not moved.

Wenders plainly was, and uses the cameras at events, large scale and small, to show us faces — beatific in their faith, or questioning what they see (in Israel, Egypt and elsewhere) — people of all creeds impressed by the anti-imperial example this simple priest from Argentina sets.

I can’t speak for all non-Catholics, but there is a certain hope that any new pope has the Hippocratic Oath in the back of his mind — “First, do no harm.”

The most recent egregious harm inflicted by the church, and blowing back onto the to the church’s image, is the worldwide priest sex abuse scandals. Francis addresses this with a firm “Zero tolerance” promise to punish the “betrayal” pedophile priests committed. He bluntly but gently counters a question at an Italian press conference about “the Gay Lobby,” with “Who am I to judge?” That Jesus thing about “loving everybody” is the only church dogma Francis never disavows.

The toughest questions he faces are in Q & As with workers, the poor and school children. In interviews with the filmmakers, Francis speaks directly to the camera about these issues, global inequality, the worldwide refugee crisis and the three “T’s” of his message (in Spanish and Italian and occasionally English, with subtitles).

“Trabajo (work), tierra (land) and techo (a roof over one’s head)” is what he’s after. Reduce poverty, redistribute wealth, remember that “we are all brothers, whether we like it or not.” 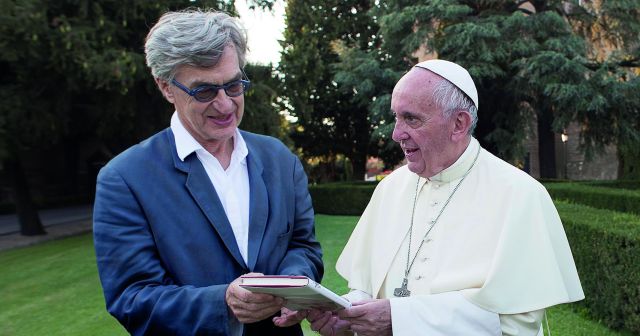 His messages may resonate, but as I mentioned, he’s not a dynamic speaker or dazzling screen presence. His charisma isn’t just conferred by his position, but it mostly is.

Wenders limits the film by not having many other voices (just a nun who remembers his days in Argentina), and by narrating it in his somnambulist drone of a German-accented voice.

You don’t feel Francis is challenged on anything here, and as lightly charming and impressive as he and this almost-all-access documentary is, one can only imagine what the great doc-makers — Errol Morris or Werner Herzog or Barbara Koppel — could have done with this.

The jury’s still out on his papacy, and in a world spiraling into nativism, fascism and conflict, his “Jesus was a revolutionary” message has yet to stem the tide of intolerance or part Mark Zuckerberg and his ilk from their billions. But Wenders and this thought-provoking but borderline hagiography documentary may be right, that given time, this modern day incarnation of St. Francis may touch lives and change the world.