Movie Review: Documentary suggests “What Haunts Us” is more than just a crime and our reaction to it 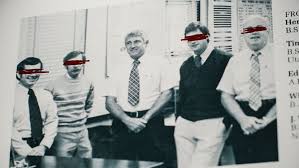 A few years back, the U.S. Supreme Court established the idea of “corporate personhood,” insisting the organizations and companies have the same rights — “free speech,” etc. — as people.

But one thing I always wondered about the “Citizens United” ruling, if such entities are people with rights, why isn’t there a death penalty for them? People are executed, imprisoned, stripped of their rights. Why not wrongdoing businesses?

After Bhopal, why does Dow Chemical still exist?

Why, when I visit the Wikipedia page for Charleston’s exclusive, pricey Porter Gaud Prep, is it still there? And why is there no mention of the sex abuse scandals that rocked the school, cost its insurer over $100 million on that sanitized, dishonest “nothing to see here but the scion of Charleston’s elite” Wikipedia entry on its history?

That court ruling, and alumna Paige Goldberg Tomlach’s damning DAMNING documentary, “What Haunts Us” may be the only punishment proud, insular Charleston will allow for this hallowed private school, founded just after the Civil War, or as some parts of the South used to refer to it, “the Late Unpleasantness.”

Tomlach’s film revisits an open secret at the school — that it hired, protected and sympathized with a serial child rapist. And it reveals a still-open wound. Alumni of that school have been killing themselves ever since.

And “Everybody knew” this “coach/trainer,” Eddie Fischer was molesting boys. He had a nickname, “Drop your drawers.” Yes, any injury or malady a boy complained of at the school would prompt “nurse” Eddie to make that demand.

Other demands — sodomizing kids as young as 12, going back over decades of a “teaching” career — were made in his home, office, locker room and showers. It is the Penn State scandal rewritten with the accent of Southern aristocracy, a closed “fortress” community that refused to listen to those few who spoke out, who refused to take action for a variety of reasons, some despicable, some criminal of the “fellow traveler” persuasion.

“Adults believe adults,” a local state solicitor says, explaining when there is no hope of excusing what was happening.  Another local sums up community indifference in the best sound bite in the movie.

“The rich people in Charleston, they harbored a pedophile.”

Tomlach interviews lawyers, prosecutors and victims — some of them disguised on camera. She tries repeatedly to get the school to put someone on camera to talk about what she and classmates from the late ’70s, early ’80s describe as a still-bleeding wound.

Former students relate their efforts — bringing up the “What IS it with Coach Fischer?” at student council meetings — and their guilty silence. Former teachers, when they will talk about it at all, are best at remembering thinking this Eddie Fischer guy was a “con man,” and bringing their concerns to the top two administrators.

Those two — Berkeley Gimball and James Bishop “The Major” Alexander — would be the film’s true villains, if there weren’t video of Fischer’s bald-faced admissions of his crimes in deposition.

And the story has a hero, a class screw-up finally kicked out for cheating, on purpose, he says, and we’ve no real reason to doubt it. Anything to get away from this monster given access to him by a totally complicit administration and largely complicit board and community at large. Guerry Glover stood up while in school, and kept harassing the complicit board and the State of South Carolina until this scandal burst into the open.

It’s a hard movie to embrace, and some of that stems from the entitlement that simmers in the background of the school, those who attend it, of the city, the monied alumni interviewed and indeed the filmmaker herself, who narrates and does the questioning here. They’re no less victims, but as they admit, they “knew.” Most didn’t even bother to tell their country club-set parents.

Tomlach begins with the suicides and ends, in short order (70 minutes or so) with lingering heartbreak and outrage.

But the only feeling one can walk away from it with is “Why is the criminally negligent institution still in existence?” At least now, we can change Porter Gaud’s infernal lie of a Wikipedia page.