Joaquin Phoenix makes a triumphant return to the big screen with the haunting, harrowing and hallucinatory “You Were Never Really Here,” a hit man thriller from the director of “We Need to Talk About Kevin.”

Lynne Ramsey, working from a Jonathan Ames (TV’s “Bored to Death” was his) novel, has found fresh ground to plow in a genre that long ago ceased to promise anything new.

From time to time, I’ve been asked to help judge student filmmaker competitions, and rare is the weekend when these aren’t stuffed to the rafters with hit-man tales. Seeing scads of these genre pieces at once points you to the narrow confines moviemakers create them in. The tropes all go back to John Woo (“The Killer”) and Jean Reno (“The Professional”).

They’re loners, silent, uncommunicative and inconspicuous, blending in. “Joe” (Phoenix) is like that. He’s bearded, doesn’t talk much goes about his “work” with the efficiency of the well-practiced. We meet him in a hotel room, cleaning up. He washes the blood off the tools of the trade (a ball-pein hammer), careful not to spatter anything beyond the plastic he’s laid out. He burns paper evidence, careful not to set off the smoke detector (covered in plastic).

Hit-men always have intermediaries, guys who set up the contracts and handle the money. Watch HBO’s “Danny” with Bill Hader, or Luc Besson’s Jean Reno masterpiece, “The Professional.” Joe gets the call from McLeary (John Doman) and collects his cash from bodega owner Angel (Frank Pando).

Hired guns are paranoid. They have to be. Joe is rattled when a teen employee of Angel’s makes too much eye contact.

Inevitably, they have some “soft spot” secret, a pet cat or a favorite plant (“The Professional”) at home, in Joe’s case — his elderly, infirm mother (Judith Roberts). She’s always asking him about “your girlfriend.”

“Janice? My girlfriend from 20 years ago?”

They’re unsentimental, but a LOT of movie hit-men have “a code,” “No women, no kids,” as Chow Yun-Fat put it in films like “The Replacement Killers.” Joe doesn’t own up to this, but when he takes a job, rescuing a senator’s daughter from a pedophile sex slavery ring, that becomes his ethos.

Child sex slavery rings are an Internet and movie meme, at least partly because of scandals and rumors of scandals that permeate the Internet Hollywood gossip scene.

Joe’s orders are to get this kid back, and the senator (Alex Manette) adds, “I want you to hurt them.”

Ramsey, like many tackling this genre before her, revels in Joe’s prep-work. There’s always a trip to the hardware store — duct tape, pull-ties, and a ball-pein hammer.

We’re not meant to think this hardcase is any sort of deep thinker. He wears hoodies, takes the stairs and not the elevator to meetings and doesn’t engage in smalltalk.

He doesn’t over-plan. He’s got that ball-pein hammer. He’s seen “Old Boy.” He knows how injurious and lethal that simple tool can be. Ramsey shows us, via closed circuit TV footage (no sound) and off-camera (sound only) just how much mayhem a bulky, hot-tempered brute like Joe can stir up with just that hammer.

But there are complications with the contract. Cops are involved. Blowback is quick and ruthless. Joe suffers (he’s injured on every job), he grieves and he sticks with it.

“No women, no kids” he must think. In between the flashbacks, hallucinations and moments where he’d just as soon end it all, with a plastic bag or a well-timed step in front of a New York elevated train. 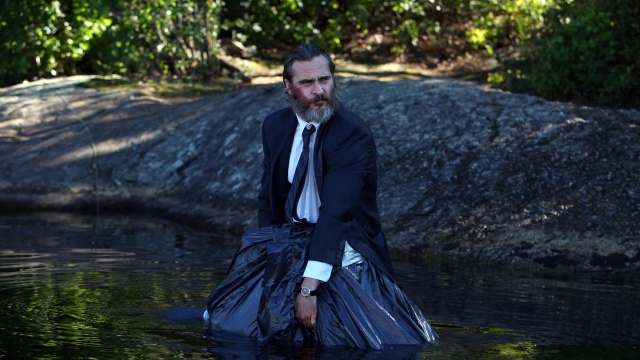 That depiction of the psychic toll this work would take on a person, and the traumatic past that might make one consider hurting people for a living, is what lifts “You Were Never Really Here” clear of its genre.

The true-story hit-man movie “Ice Man” followed a pitiless killer by day, a soul-dead assassin, who keeps that life from his wife and neighbors. Joe was broken as a child, and military service, with the unrelenting horrors of a war zone, reinforced that.

Phoenix is equally adept at delivering the savagery this man summons, on demand, and the brooding talk-to-himself, cannot-trust-what-he-sees inner turmoil of a made-not-born sociopath. Ramsey keeps the camera tight on him for much of the movie, letting his eyes do the acting.

It’s a compact, perfect performance in a tight, tense genre picture that manages just enough twists and surprises to separate it from the hired-killer-movie pack.