More Controversy over “Shape of Water” — a very similar play, and a lawsuit 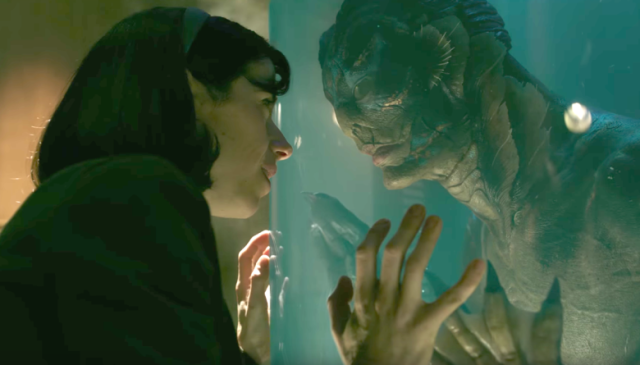 As if Oscar favorite “The Shape of Water” didn’t have enough headwinds facing its breathless march toward Best Director and Best Picture honors.

It’s built around bestiality, for “Hollywood’s agenda is PERVERSE” protesters.

It’s a violent, predictable and hilariously over-rated genre pic which offers few surprises,. The villain is, well, Michael Shannon — WASP old school White Male Dominance. The heroes are everybody who stands in opposition to him — black, Jewish (committing Rosenberg espionage and treason), gay and mute. Subtle. And yet it still collected 13 Oscar nominations from the credulous.

Then, there’s the short film it seems inspired by.

And now, there’s a 1969 play that might have been more on-the-nose source material for this “Creature from the Black Lagoon” “love” story. Paul Zindel’s 1969 play “Let Me Hear You Whisper” is about the same subject — janitor falls for imprisoned aquatic creature. His estate is suing Senor Del Toro.

It’s an idea that feels timeworn in the film, as in we’ve seen this before, right? No? Are you sure?

Kind of low-hanging fruit, but if anybody can prove Gullermo del Toro saw any of these “inspirations,” well, it’s “How much will it take to make you go away?” check-writing time.

1 Response to More Controversy over “Shape of Water” — a very similar play, and a lawsuit