Movie Review: Film masters the gloomy tone, but dispenses with the suspense of impending “Annihilation”

Posted on February 22, 2018 by rogerinorlando

A fundamental rule of thrillers is that you can’t give away too much too early and still expect anybody to hang on the tenterhooks of suspense.

“Annihilation,” the screen adaptation of Jeff VanderMeer’s alien infestation novel, almost has enough going on to get away with that. It’s framed within a dour, standing-room-only debriefing of the only survivor of a science team that went to investigate an asteroid-delivered phenomenon that has engulfed a state park.

Yeah, we know who survived. But the glum fatalism that hangs over her interviewer (Benedict Wong) and all the other haz-mat suit attired scientists suggests that there might be hope of dealing with whatever’s happening. Or maybe there’s just a scant chance of even understanding what is bringing doom to the planet, and that will have to be enough.

This is “Arrival” without any hint of Amy Adams optimism, something Alex Garland’s film smothers, from first frame to last. An academic biologist and ex-Army doctor (Natalie Portman) is grieving for her Sgt. husband, who was sent into this growing, living protoplasmic biosphere that scientists have taken to calling “The Shimmer,” as perfectly descriptive a name as you could imagine.

That husband (Oscar Isaac) and their love affair is detailed in flashbacks, as is his sudden and inexplicable return. That was when the Black Helicopters and Black SUVs swooped down on them and Lena was taken prisoner by people who could use her help, people who also need to isolate that strangely-altered and seriously confused soldier-husband.

Portman’s big scene and the most emotional moment in the movie comes during that shock-reunion. That’s another structural difficulty in this cryptic, cerebral and bleak thriller — it’s emotionally flat save for that one moment. Most of the emphasis is put on the nature of this phenomenon and everyone’s dismayed resignation at dealing with it, and trying to understand what or who it is and “What it wants.”

“I don’t think it wants anything.”

Lena signs up to join the latest team sent in to investigate, along with a fresh-out-of-college physicist (Tessa Thompson), a flirtatious paramedic (Gina Rodriguez), an anthropologist (Tuva Novotny) and the sad-faced psychologist (Jennifer Jason Leigh) who “cleared” every member of earlier teams for enlistment of what appear to have turned into suicide missions.

But maybe not. Lena, concealing her motives from the others, is really after answers about what happened to her man.

Behind the gossamer curtain of this growing “Shimmer” is something akin to Pandora, the world of “Avatar.” Familiar creatures have taken on alien traits. Mold grows into vast, all-consuming patches, flowers evolve in rapid spurts and whatever evidence the scientists stumble across of earlier teams ranges from grisly to deeply disturbing — some of it archived on video. 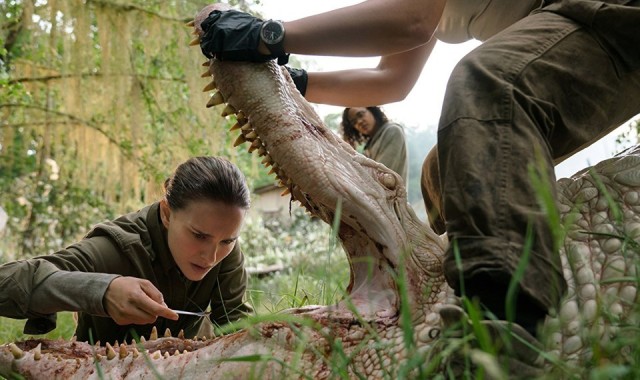 We can fill in the blanks as to the differences between the new team — all women, mostly women of science — and their male predecessors. Perhaps something like “Alien” went down, or “Predator” — elite commandos, isolated from the outside world, failing to understand what they’re up against before reflexively fighting back.

The  women, it must be said, are sorely lacking in any sense of urgency. The world-threatening stakes have been laid out, and even if they were the only ones to volunteer out of a vast assembly of scientists, they seem more resigned than panic-stricken or frantic to solve this puzzle and find a way to defeat this threat before total “Annihilation.”

We know the survivor, who tells the tale. That robs some of the surprise of the attacks to come. They’re jumped by a hybrid alligator, and promptly pile into flat bottom boats to travel across the very waters the beast just lunged out of.  So, “book smart” but maybe lacking common sense and woodlore.

There’s a lot of puzzling over the clues, discussions of the science that drives what’s eating them. Literally.

Portman is good at playing this weapons-savvy scientist with an obsessive need to know about what happened to her husband inside this glimmering fog world he marched into. Isaac has to play his post-return self as mentally and emotionally gutted. But there’s not much to their “romantic” flashbacks that suggests a Great Screen Love Affair. Maybe that’s the way the guilty-conscience Lena remembers them.

There’s a tendency in science fiction movies, even sci-fi horror, to conflate “quiet” with “smart and deep.” This plays as a soft-spoken, contemplative, less-action-packed version of “Avatar,” though its tonal sci-fi sisters are the melancholy “Solaris” and fatalistic classic “On the Beach.” There are allegories in play here, but nothing as potent or easy to sink your teeth into as there was in Isaac’s previous collaboration with writer/director Alex Garland,  “Ex Machina.”

Conversations are thoughtful, but shot in the most static way imaginable. Even the horrific attacks feel muted, generic, with the screams of the endangered but emotionally damaged and depressed sounding exhausted and lacking resonance.

All of which add up to a movie worth seeing, worth mulling over, but not necessarily enjoyed.

MPAA Rating:R for violence, bloody images, language and some sexuality

Credits:Written and directed by Alex Garland, based on the Jeff VanderMeer novel. A Paramount release.