Movie Review: Clint goes Cloying for “The 15:17 to Paris” 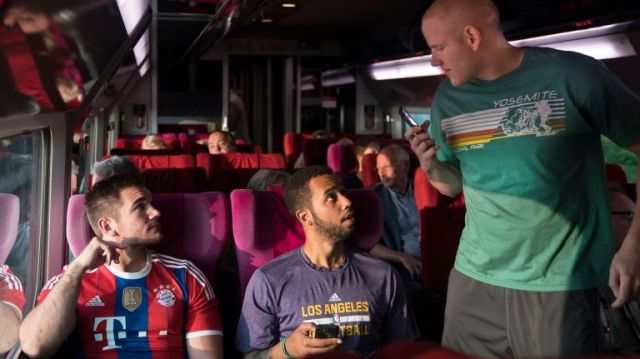 In retrospect, Clint “One Take” Eastwood was probably the wrong guy to direct a movie in which he cast three non-actors to play the lead roles, and three underwhelming little boys to play the leads as children.

And it’s no comment on the heroism of the men cast to play themselves in “The 15:17 to Paris” to describe the first two thirds of the story of their lives together, from middle school to military careers to a fateful train ride from Amsterdam to Paris one August day in 2015, as almost excruciating to sit through. A mawkish Dorothy Blyskal script, based on a memoir by the three, a cumbersome flashback structure that lacks suspense, a grasped-then-quickly-abandoned cloying voice-over narration and the unaffected and ineffective acting make this feel like the worst movie Clint’s made since he stopped teaming up with a baboon.

Then the climactic event arrives, and it’s “Sully” redux — trained professionals doing what they’ve been trained to do, saving lives, confronting a threat and becoming national heroes in the process. “The 15:17” climaxes with a flourish. And then, doggone it, Eastwood runs on at length past the climax to remind us, “Oh yeah, this was a dreadfully dull picture before THAT just happened.”

That brief and grating narration is by Anthony Sadler, the non-military member of the trio who stopped a terrorist attack in its tracks — literally — on that train. They were old friends taking the Grand Tour of Europe, “but let me take you back to where it all began,” he says.

We see Spencer Stone and Alex Skarlatos in a Sacramento middle school, bullied, clinging to each other, their camouflage wardrobes and their mania for guns and playing war, and we hear talking the way middle school boys never talk.

“I tried to fit in! I tried!” Spencer cries.

“You fit in with me,” his shorter pal Alex reassures him.

These early scenes, with their devoutly Christian single moms (Judy Greer and Jenna Fischer) standing up to principals (Thomas Lennon) running out of patience and teachers who suggest “ADHD” and medication, based on the boys’ attention spans and disruptive behavior, are unintentionally chilling.

These kids are headed for trouble. I can’t be the only one reminded of those bullied, rebellious and camo and gun-crazed outcasts who went on to shoot up Columbine High School. Their teacher cites statistics to that effect.

“My God is bigger than your statistics!” Greer’s Mother Stone shouts.

Changing schools, meeting their third musketeer (Sadler) and playing Airsoft war games and pranks on neighbors, one is hard-pressed to see what the older Sadler later sees as Stone’s true calling, “helping others. It’s who you’ve always been.”

Maybe Clint forget to shoot one take of a scene illustrating that. 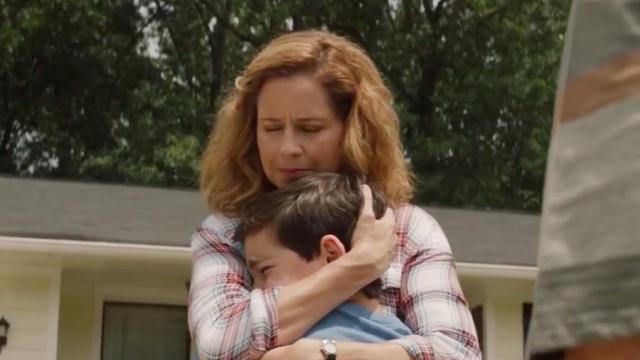 The meaningful part of the movie is Spencer Stone’s conversion from unfocused, aimless Jamba Juice seller to young man with a plan, a plan that evolves as he bombs out of his first choices for military service. Being a medic is where he settles.

Neither Alex nor Anthony are followed through these years, but one ends up in the infantry in Afghanistan and the other in a job that allows him to at least get a credit card so he can charge his part of their Rome to Venice to Berlin to Amsterdam to Paris trip.

The travelogue — seeing the sights, arguing with better educated tour guides about WWII history, meeting girls and hitting the clubs — is some of the dullest footage Eastwood has ever committed to the screen — filler, a paid vacation for one and all.

There are eye rolling moments of foreshadowing, delivered first by Alex’s mom and then by Spencer, who feels his struggles are “catapulting me towards some higher purpose.”

Only after an hour of that do we finally get to the climax, which is harrowing, violent, bloody and is as gripping as all that wonderful stuff in “Sully” showing New York first responders as the dazzling professionals they were that day that plane went down in the Hudson.

Eastwood has latched onto real-life heroes in this, the third act of his storied directing career. And that’s worthy of praise. But non-actors are rarely dazzling in portraying themselves on the screen, and that compounds the problem that the script seems to be giving us a sanitized and humility-filtered version of the tale. Sharing the credit like a band of brothers isn’t the most dramatically compelling way to go.

That also goes for the heroism itself. The movies have lurched towards heroes with “special skills,” which we see the real-life Spencer Stone acquire and put to use. Fair enough. It’s still not remotely as dramatic as people out of their depth responding to a crisis they’re not trained to deal with.

But that’s Eastwood’s larger point, here. Here are young men, screw-ups in a sense redeemed by their commitment to “save others” via the military. They act when others cower.

We should never forget how lucky we are to have them around. And if a Hollywood legend decides to put them on the payroll as an extra reward, and is nakedly pandering to the “American Sniper” and Christian conservative audience they represent, we can indulge him that.

Just don’t be fooled that any of those indulgences helps a movie that could use all the help better actors and a better script might have given it.

3 Responses to Movie Review: Clint goes Cloying for “The 15:17 to Paris”