Movie Review: “The Love Punch” is no knockout 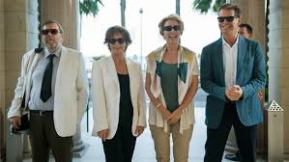 “The Love Punch” is an empty-headed nothing of a caper comedy, a movie whose
moves are so obvious and obviously absurd that even a moment’s scrutiny lets the
gas right out of the balloon.
But darned if those high-mileage troopers Emma Thompson and Pierce Brosnan
don’t play the heck out of a flimsy plot. And even less-than-witty banter sings
when they’re flinging it at one another.
“You get me, Kate,” Richard (Brosnan) purrs to his ex (Thompson). “Or at
least, you used to.”

“That’s because I’m a trained child psychologist.”They’re divorced, but oh so cute together.</P>
“Come Ooonnnn,” old pal Jerry (Timothy Spall) pleads. “Get back
together!”
But split they are, amicably or not. They pack their daughter off to college,
and then the bottom falls out of their happy divorce. Richard’s company is
looted by a French takeover fiend. And since Kate’s retirement was swiped as
well, they’re in a pickle.
“How’s your FRENCH?”
“Non,” she says, seeing where this is going. “Non non non.”
But Richard knows how to get to “Oui,” and next thing they know, they’re
confronting the fiend (Laurent Lafitte, too soft to play the heavy). And then
they’re plotting to crash the guy’s wedding to a super model (Louise Bourgoin),
steal the $10 million diamond necklace he’s bought her and thus save the
retirement of everybody they know.

As if.
Writer-director Joel Hopkins, who never has lived up to the promise of his
“Jump Tomorrow,” ineptly stages car chases in a tiny Citroen through Paris, a
scene set to Free’s “All Right, Now” as chase music. That’s so obviously a
compromise choice for a chase tune that you’ll grimace. The tempo is all
wrong.
Hopkins has his heroes and heroines (they enlist Jerry and his wife Penelope
— Celia Imrie) get a fake version of the diamond fabricated, snorkel in scuba
suits, clamber up a cliff, pose as Texans invited to the wedding and attempt a
daring caper. None of which this bunch could possibly pull off.
But here’s what works –the running gags. EVERYbody wants Kate and Richard to
get back together, even the innkeeper (Marisa Berenson) at the pension where
they check in to plot their heist
“And you are holidaying together to see if the FLAME still burns?”
“The flame is out,” Kate corrects. “Snuffed. Gone.”
Thompson and Brosnan have chemistry. And Spall is a delight playing goofy
Jerry as a man with a past, one his wife of 35 years only learns about as he
keeps saying “I have a guy” or “I have contacts” with gun dealers, fake diamond
fabricators, blue print providers.
“When I was in the Legion,” he explains. Wait, the French Foreign Legion?
“Back when I was in the Merchant Marine…When I was in Saigon in ’64.” Or,
“Back when I was in Guam.” Imrie’s reaction to every new revelation is a giggle.
“When I was with the Australian paratroopers…”
They’re in an undercooked and under-plotted caper comedy, but you’d never
know it from these four. Perhaps they were just happy to be shooting on the
Riviera. They help “The Love Punch” land just enough blows to the funny bone to
be worth it.