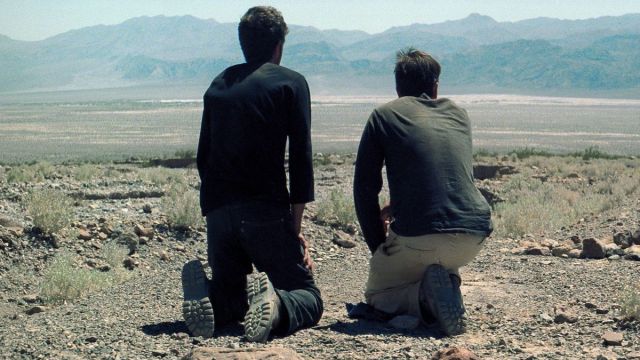 “Gerry” is one of those indie films whose reputation spread much further than its distribution. And that reputation explains how few people have seen it. It’s an interesting experiment in minimalism, but a willfully obscure, indulgent wank of a movie.

Two friends motor into the desert for a hike, to see something, a “thing” that is their destination. A natural phenomenon, nirvana, “the American Dream?” We don’t know.

They both go by “Gerry.” And whenever they mess up, the expression they use for their ineptitude is “Gerry it up.”

The hike goes wrong when they run short of time and decide to “Gerry” their way to “the thing,” rather than follow the path other hikers, tourists or “pilgrims” take. While the desert isn’t featureless — not at first, anyway — this might not be a disastrous call.

But since neither Gerry (Matt Damon) nor Gerry (Casey Affleck) is very experienced at hiking, since they’ve neglected to bring water, “bushwhacking” (what hikers in my part of the world call taking their own path) could be fatal.

What co-stars and co-writers Affleck and Damon were shooting for her, and what director Gus Van Sant captures in one gorgeous but stark composition after another, is an existentialist riff on “Waiting for Godot,” featuring two down-to-Earth-but-ill-prepared Americans confidently wandering into the abyss.

I’ve seen “Godot” lots of times, as a theater viewer and critic, and most of the absurdist or existential plays it’s often grouped with. I can’t say these two, Oscars aside, really get there with this script. The futility is there, but not the poetry or pathos.

But as the two Gerrys trudge in desert-crunching silence, their pace quickening as panic sets in, I locked in on their predicament, the hiking lore that drives their decisions.

Yes, you tend to start hiking faster, trying to outrun your way out of being lost.

Yes, in the West, you look for promontories and climb one to get your bearings and find your way to civilization. In the East, you hike downhill, looking for a stream to follow to a river to civilization.

No, you never go out in the desert, even in winter, without water.

Each Gerry gets himself into a predicament that he acts as if he cannot extract himself from. Each frustrates the other. Blame sets in, even when it isn’t expressed openly.

“How do you think the hike is going so far”?”

And as they crunch from dry creek beds, in search of water, up mountainsides, across dunes and even salt flats, you wonder how lost two doofuses have to be to turn the road-crossed and somewhat developed desert southwest into “Lawrence of Arabia.” 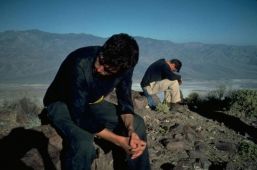 The performances in this 2002 production aren’t the most demanding Damon or Affleck have attempted. But looking at “Gerry,” you can see Affleck’s attraction to such later dialogue-light projects as “Light of My Life” and “A Ghost Story.”

About 60 minutes into “Gerry,” your tolerance may face the desert of your own impatience with its repetition and dreary monotony. It looks like a beautifully-shot but under-scripted indie feature everybody involved knocked out in a couple of weekends.

But if you’re going to tackle something deeper, skimming the surface of Beckett will never do. Damon, Affleck and Van Sant did just that and that alone, and that leaves the viewer thirsty for a lot more than “Gerry” delivers.