Movie Review: GIs are spooked by “Ghosts of War” 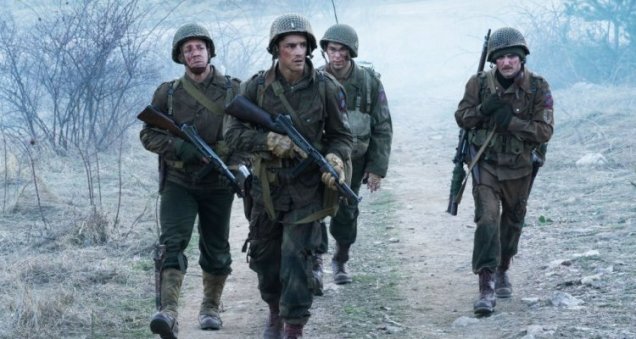 World War II GIs are sent to hold a remote French chateau, and confront the ghosts of those the Nazis murdered there — and maybe a few demons of their own — in “Ghosts of War.”

The temptation is strong to just say “Not really my thing,” and leave it at that. It’s a mediocre mash-up of genres that leaves no cliche unspoken, no horror trope unturned.

We get a tip, about midway through it, from “the smart one” (naturally wearing glasses), Eugene. He’s been reading from this journal he found. He’s been explaining the pentangle found upstairs. He’s been leading the support group meetings of what “haunted house” really means, what agenda ghosts might follow and the like.

And then he plugs this famous short story, the inspiration for many a horror movie and TV war-horror episode. Just out of the blue, blurts it out.

The details here — a squad of five, including the “always gotta be a hero” Butchie (“Titans” cast member Alan Ritchson), Eugene (Skylar Astinof the “Pitch Perfect” movies), Kirk (Theo Rossi of TV’s “Like Cage”), the lieutenant, Chris (Brenton Thwaites, also of TV’s “Titans”), and the sharpshooter, who might be a psychopath (Kyle Gallner of TV’s “Interrogation”).

To be fair, it’s hard to remember who executed assorted survivors of a German command car they ambush, who used his bayonet to search for gold teeth fillings among the SS men.

They meet refugees, some in concentration camp stripes, before reaching the chateau. And the airborne troopers they relieve (Don’t look at anybody’s shoulder patches, it’ll just make you cringe.) are awfully skittish, look like they haven’t slept and that they’re keeping a secret.

“So, what’s wrong with the joint?”

They’re not saying. But as the sun goes down and the nightmares begin, well — a Nazi column headed their way seems like the last straw.

“Lookit, before the Nazis come, we should like 23 skiddoo!”

Of course they can’t. Something’s in the tub, in the attic, in the cellar. Something vengeful or something evil?

“Evil? Well, it’s what makes the violence so much fun!”

We’re not meant to pay any attention to the lax way these blokes go about their soldiering. They’re all inside, and instantly assume any threat they face is coming from within. It’s like they’ve read the script and know better than to waste time putting anybody on, you know, WATCH, when you’re behind enemy lines.

Why does every sniper-sharpshooter in a WWII movie look like Barry Pepper in “Saving Private Ryan?” Nobody else in the cast really stands out, even the chatty one with the eyeglasses. Did Billy Zane learn to speak German phonetically for this?

There are a couple of visions-of-hell moments that writer-director Eric Bress (He did “Butterfly Effect,” which he wishes we’d forget.). But there’s little here, spirits yanking people into the darkness, that we haven’t seen before and seen done better.

And then the movie switches gears for a drawn-out finale full of inane, nonsensical explanations and a whole other setting.

It doesn’t work, even if you invoke the name “Ambrose Bierce.”

Credits: Written and directed by Eric Bress. A Vertical release