Bingeworthy? Danes face terror, and personal reckonings for it “When the Dust Settles” 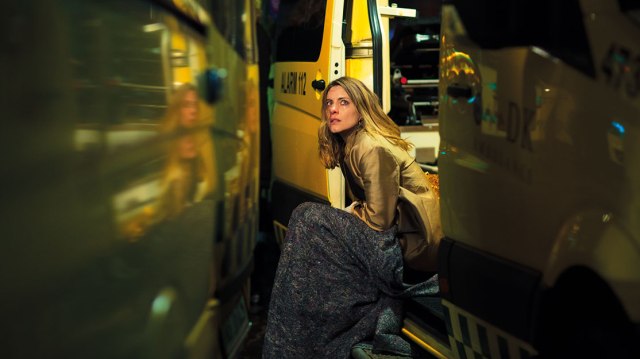 The Danish mini-series “When the Dust Settles” invites a sweeping generalization, if you compare it to most English language limited-run dramatic TV series. Typically, your average Northern European program of this sort demands more from the viewer.

It’s not just the language barrier and the unfamiliarity of the cast to North American viewers. There’s a density to the writing, a teasing out of facts, a complexity in the plot wrinkles. “Dust,” a ten-episode tale of a Copenhagen terrorist attack, its prelude and aftermath, produces more “Well, I didn’t see THAT comings” that anything I’ve seen this year.

Creators Dorte Warnøe Høgh and Ida Maria Rydén give up their details grudgingly, from the names of the dozen or so principal characters to their interconnections, the things that bring them to that restaurant that gunmen shoot up on that fateful night.

Even the shooting itself, glimpsed in a noisy, horrific blur in the opening episode and revisited, in bits and pieces, until “the night of” five episodes in, has much concealed. Seeing it play out in agonizing real time in that fifth installment is heart breaking. Revisiting the mass murder in the episodes that follow often just as heart-breaking.

Although producers of series everywhere face the common failings of such programs — dragging things out, turning a 4-8 installment serialization into 10, no matter how much filler they have to include — and even the best series stumble into artifice and cheating (not playing fair with the “mystery,” here) “When the Dust Settles” maintains suspense almost to the very end.

It’s the most gripping series I’ve binged this year, and I’ve abandoned far more than I’ve actually deigned to review.

The characters we meet are a wide swath of Danish society.

Elisabeth (Karen-Lise Mynster) is Justice Minister/Attorney General in the conservative Danish government, the daughter of a Holocaust survivor nursing a very liberal, anti-internment camp refugees bill through parliament. She is retirement age, determined to make this bill her crowning achievement before spending her twilight years with wife Stina (Lotte Anderson).

Ginger (Katinka Lærke Petersen) is a homeless addict lost in “the system.” Yes, she’s got a “story.”

Nikolaj (Peter Christoffersen) is a meticulous, callous chef from Greenland (ethnically Inuit/Danish) whose empathy issues scream “on the spectrum.” He’s just taken over the restaurant in a kitchen coup, renamed it “Hog” and centered it around pork.

Jamal (Arian Kashef) is a rattled, impressionable and bullied young member of Denmark’s Muslim community, which may see an eatery focusing on pigs and named “Hog” as an affront.

Morten (Jacob Lohmann) is the plumber who charges into Hog in his underwear, frantic to find his self-absorbed druggy son Albert (Elias Budde Christensen) who works there.

Marie (Viola Martinsen) is a child who turns nine on the night of the attack, a little girl already afraid of being alone, a real trial for her waitress/single-mom Louise (Filippa Suenson).

Lisa (Malin Crépin) is a Swedish pop star reaching an age where she wants something more than touring, recording and a marriage of professional convenience.

Holger (Henning Jensen) is a grumpy old nursing home resident, estranged from his children. His answer to “Anything else you need (in Danish, with English subtitles)” from the staff there is his mantra. 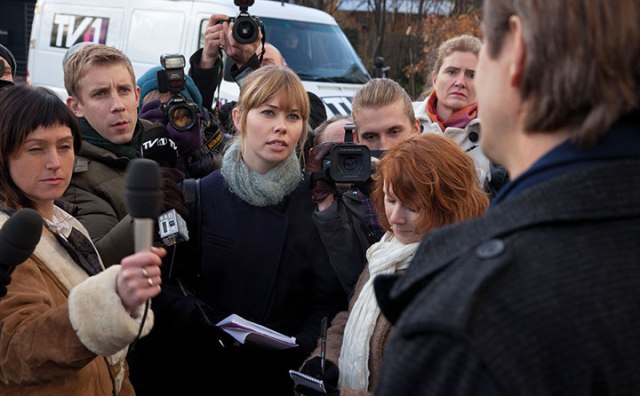 The series reveals how these characters connected or stumbled into one another in the days leading up to the shooting and revels in the issues each is wrestling with.

Every character has an arc. They begin in one place, personally, and find themselves changed — sometimes for better, often not — by the terror and trauma they experience.

As stories unfold in flashbacks and flash-forwards, we see the extremes the justice minister will go to in order to protect her “bill,” the trials of the plumber, whose school-teacher wife (Julie Agnete Vang) is more worried about chasing their no-good son away than in reining him in, the long list of enemies the emotionally-lacking chef has made, the pressures Jamal faces in a stressed, scrambling-to-get-by Palestinian family run by his tyrannical brother (Manmeet Singh) and the nightmare homelessness is, even in a socialist state where housing will be provided, so long as you’re “in the system.”

Some of the Danish “police procedural” stuff can feel a bit clumsy and theatrical. If you mutter “They can’t be that naive” here and there, you’re not alone in that reaction.

But the writing is crisp, clean and quotable. It’s all beautifully played, with even characters far down the credits given nuance, complications and agendas.

A lot of the most intriguing European series are turning up on First Look’s Topic. “When the Dust Settles” is another argument for adding that network/streamer to your video menu.