Movie Review: “Relic” asks “Where’s Gran?” Do we want to know the answer?

“Relic” may be shrouded in gloom and fog, draped in the trappings of many a haunted house thriller. But its most revealing lines of dialogue can be appreciated by everyone, even those who don’t believe a house can be haunted.

A daughter, talking about her grandmother, reveals her understanding of life, aging and family responsibility to her mother in a universal truth.

“Isn’t that how it works? Your mum changes your nappies, then you change hers?”

This chilling Aussie horror tale is a parable on care for the aged wrapped in a curse that’s been literally built-into the family homestead.

Kay (Emily Mortimer) has been busy in Melbourne, too busy to keep close watch on her aged, widowed mother at her forest home out in the country. Now she and daughter Sam (Bella Heathcote, of “Dark Shadows” and “Pride and Prejudice and Zombies”) have to go back there because neighbors haven’t been able to raise  “Gran” (Robyn Nevin, who was in “The Matrix” movies) on the phone or get her to come to the door.

Mother and daughter have to break into the house when they arrive. They search high and low. Every blanketed bed, every shawl-covered chair they YANK the cloth from, fully expecting to find her corpse.

Organized Kay files a missing person report, and the police arrange a search through the foggy pinewood forest. Sam, less settled in life and career, frets over the lack of visits, ways this tragedy could have been avoided.

And then Gran shows up; barefoot, remote, not really sure where she’s been but reluctant to give up much of what she thinks is going on.

There are thumps in the night behind the walls. She talks to someone in the shadows and walks in her sleep. She’s not…right.

Kay continues “organizing” and cleaning and checking on nursing homes. Sam makes that “nappies” remark I quoted earlier, wondering why Gran can’t move in with Mum, or why she shouldn’t move in with Gran herself.

But as she asks around about her grandmother’s new habits, she grows especially spooked by whatever’s making Gran chew on old photos, or bury them in the woods, and her increasingly violent mood swings. 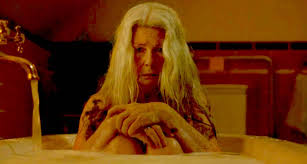 Director and co-writer Natalie Erika James, making her feature film-directing debut, finds the frights in all the usual places — that thumping behind the wall that, when you thump it yourself to see what’s there, thumps back, creepy and possibly suicidal grandmother in the claw-foot tub, menacingly wielded knives.

But what resonated for me, and I suspect will for a lot of people, is the familiarity of it all. The post-it notes — “flush,” on the toilet, “turn off tap” stuck to the tub.

No one gets out of this world alive, we’re reminded. If you aren’t dealing with this in your family, you will be soon enough. “Relic” is awash in this grim side of late life, details that most screenplays go to some pains to dodge.

I’d call the film, whose titular “hook” is seriously “meh,” more a solid feature that does what it sets out to do than any sort of landmark in the genre.

But with death all around us and end-of-life decisions hitting millions around the world, all at once, the timeliness of “Relic’s” real-life horror, with a dab of supernatural violence tossed in, could not be more apt.

This is spooky on an effects and story-telling level, downright chilling on a personal one.