Netflixable? “I Lost My Body” is a dark animated fantasia of an immigrant’s life in Paris

Posted on November 30, 2019 by rogerinorlando 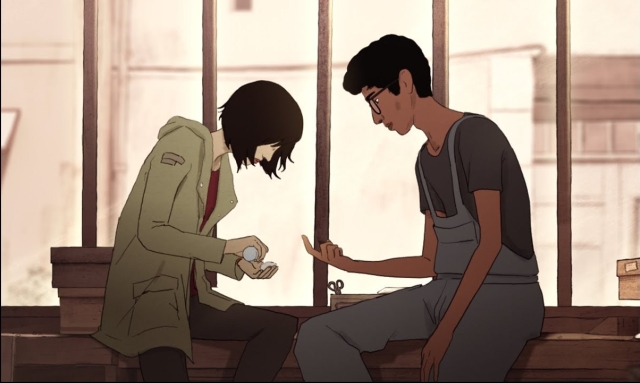 I’m not quite satisfied with that headline for this review. Remind me to return to that and have another go encapsulating “I Lost My Body,” the strangest animated offering you’ll see on Netflix this year.

It’s a memory play, a romance and a twisted fantasia on one clumsy dreamer’s youth, his “accidents” and the “fate” that brought him to Paris, to work and within the orbit of the fair librarian, Gabrielle.

Blood pooling on the floor, a busted pair of glasses and a face introduce us to Naoufel (voiced by Hakim Faris). But in a life-passing-before-his-eyes reverie straight out of Camus, his mind drifts to a (black and white) past, his childhood — palm trees and flies, everyone speaking French, and piano lessons.

My best guess (not having read the Guillaume Laurent novel this is based on) is that Naoufel grew up in Beirut.

He remembers the sounds he gathered as a boy with his cassette recorder, his father telling him how to catch a fly. “Aim for the side,” his father counsels (in French, with English subtitles, should you choose that default language setting).

The story takes us to Naoufel’s fictive present, a 20ish lad sharing a crowded apartment with other Arab world emigres, blundering through pizza deliveries on his scooter, bullied by many, indulged by few.

And then there’s the third story thread, The Great Escape. A disembodied hand breaks out of a fridge in a morgue, spilling eyeballs as it does, and makes its way out a window into the unaccomodating (for a hand with no body attached to it) world outside. Mortal combat with a pigeon and rats, near-“death” experiences with a dumpster and trains, groping along a gutter, floating on an umbrella — a hand’s eye-view of the City of Light.

Nauofel’s life-changing moment, the story’s driving incident, happens on yet another botched delivery. He, his scooter and his pizza hid and damaged by an unrepentent motorist.

The voice on the intercom of the high-rise where he makes this belated drop off is feminine and rude.

“You should get a new job,” she says, over-explaining how the name on the buzzer isn’t her, how he’s getting no tip, how she’s not coming all the way to the lobby to pick up this very late (and it turns out, ruined) pizza.

But saying he had an accident brings out the unexpected — empathy. The chat turns almost flirtatious. No, she’s not coming down. But Naoufel has a goal, now. He must meet this Gabrielle (the voice of Victoire Du Bois). If that means taking a job with her woodworking uncle, so be it.

“I Lost My Body” weaves these three story threads into a resolution, connecting the past with the present, the real with the fantastical.

And it manages all this connection and mysteries resolved in just 81 minutes.

That brevity works against the film, at times. Just when the potential romance, a meeting of the minds, is flowering, we cut away to the cut-off hand. Just when we’re getting to where the hand came from, we’re shown Naoufel’s childhood again, folding in how he was then to the young man he grew into — dreamy to the point of clumsy.

The animation is understated and under-animated. It has the jerky motion of using a lower frame rate (anime speed). But first-time feature-director Jérémy Clapin and Laurent, a French cop turned screenwriter and award-winning novelist, have conjured up a lovely, surreal odyssey as animated memory play, and an engaging and ambitious film that cannot be adequately summed up in a headline.

It almost (but not quite) defies description.